If nothing else is learned during the 2020 election season, this one lesson must be taught, shared, and passed down through the ages: the Democrat Party of 2020 absolutely deserves Bernie Sanders. Of course, many Democrats will deny this, because they well know that Crazy Bernie is a presidential electoral disaster just waiting to happen. Every caucus and primary he wins or finishes strongly in puts the democrats closer to that well-deserved reality.

Despite their recent efforts -- Mike Bloomberg entering the race, Hillary declaring Sanders a “career politician” that “nobody likes,” James Carville complaining that Sanders wants criminals and terrorists to vote from jail cells, Chris Matthews lecturing the American left on the perils of socialism -- Bernie keeps polling well and winning races. Much to the chagrin of Democrats, whether he wins or loses a particular primary, Bernie is going nowhere soon.

Frank Bruni of the New York Times agrees. He recently warned his fellow liberals, “Sanders will be a major force in the Democratic race until the end. He’s perhaps the only candidate about whom that can definitively be said.” Nevertheless, Bruni and his ilk keep hoping that somewhere “there’s a moderate around whom [Democrat] voters can coalesce.”

Of course, as has long been clear to anyone with a proper worldview, there are no more “moderate” Democrats running for president. In fact, there are few “moderates” to be found anywhere in today’s Democrat Party. This should surprise no one. Having a bunch of leftist radicals duke it out for your party’s presidential nomination is what happens when, among many other lies, you spend decades telling the electorate that they have a “right” to virtually everything under the sun, and the government’s main job is to provide you with such things.

In spite of the warnings of men like C.S. Lewis, tens of millions of Americans are now, or are longing to be, Willing Slaves of the Welfare State. The platform of today’s Democrat Party rests upon two duplicitous notions: 1.) the godless pagan principle of “Do What Thou Wilt,” and 2.) the presence of an “omnicompetent” Big Government that is ready and willing to mother us.

Despite the claims of modern Democrats, such a modern State exists, as Lewis put it, “not to protect our rights but to do us good or make us good -- anyway, to do something to us or to make us something.” Something indeed. Lewis concludes that under such a regime, “There is nothing left of which we can say to them, ‘Mind your own business.’ Our whole lives are their business.”

Even without a socialist in the White House, Democrats -- and other like-minded politicians (remember: Bernie’s not a Democrat) -- have been practicing their trade long enough to build a massive Big Government beast. Under the guise of “vote for me and I’ll make sure you get [insert campaign promise],” generations of Americans have been seduced into surrendering their “business” to this Big Government.

In the United States, by far the largest employer is government. Local, state, and federal government (including uniformed military personnel) employs well over 23 million Americans. This is more than twice the number of employees of the top 25 private employers in the U.S. combined.

The largest educator in the U.S. is government. About 90% of all U.S. children attend a k-12 godless government school. Over 70% of American students who attend college do so at a state school. Education accounts for nearly half (about 11 million) of the total federal, state, and local government workforce.

The largest “charity” in the U.S. is government (which, of course, brags about it!). Americans gave a total of approximately $427 billion (about $292 billion from individuals) to private charities in 2018. In 2016, Americans received over $800 billion from means-tested (recipients required to be below a certain income level) government programs (housing, food stamps, WIC, Medicaid, and the like). When non means-tested programs (Social Security, Medicare, unemployment, and so on) are included, the total is a shocking and staggering $2.3 trillion dollars. 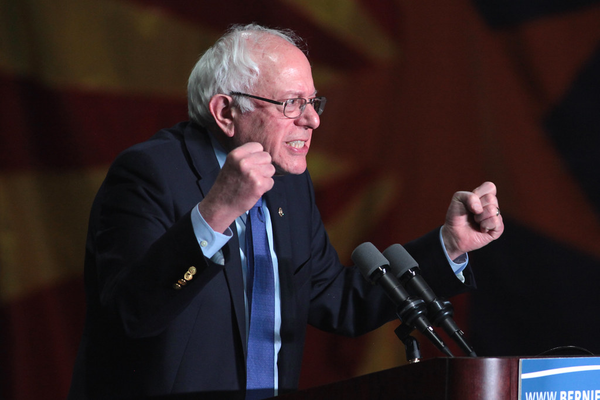 And of course, Americans now have made health care the business of Big Government. Thus, instead of liberating, liberalism has simply made tens of millions of Americans comfortable in, or at least comfortably accustomed to, their government-made chains.

A man cannot be free unless he has economic independence. As C.S. Lewis put it,

For economic independence allows an education not controlled by Government; and in adult life it is the man who needs, and asks, nothing of Government who can criticise its acts and snap his fingers at its ideology. Read Montaigne; that’s the voice of a man with his legs under his own table, eating the mutton and turnips raised on his own land. Who will talk like that when the State is everyone’s schoolmaster and employer?

Bernie Sanders’ policies would do nothing to promote economic independence, and would massively grow Big Government. Among other grossly expensive ideas, Bernie wants to enact the Green New Deal (GND), make college “free” for all, while also canceling all student loan debt -- all $1.6 trillion of it, and of course, his signature campaign promise, provide “free” healthcare for all.

None of this is new. Bernie has been promising “free” stuff his whole political career -- which, as Hillary pointed out, is the only career he’s ever had! For example, as the far-left climate website Grist points out, Bernie isn’t just another “Green New Deal bandwagoner,” he’s “the Godfather of the Green New Deal.”

As John Zmirak correctly noted last year, the GND -- a $16 trillion dollar behemoth -- is not public policy, but rather “a delusional wish list, a ransom note pasted together with clipped out words from storybooks and glued in place with bubblegum.” Yet, almost exactly a year ago, the “anti-socialist” Chris Matthews spent a large portion of his MSNBC show Hardball defending the GND.

As NewsBusters pointed out,

Matthews spun the Green New Deal as something no one could possibly object to, ignoring things such as every building in the U.S. needed to be modified or replaced if it’s not up to snuff, while cars and meat would be banned.

MSNBC hosted a town hall in order to make “the case for the Green New Deal.” If the GND  isn’t socialism, then Elizabeth Warren is a Cherokee Indian.

Along with Sanders and Warren “moderates” Amy Klobuchar and Pete Buttigieg have “embraced” the GND. Virtually every Democrat who is running or was running for president supported the GND. What’s more, this socialist absurdity has 12 cosponsors in the Senate and 90 cosponsors in the House. But suddenly, Democrat pundits are worried that the “Godfather” of this foolish monstrosity is on the verge of leading their party!

Likewise, Bernie has long touted single-payer healthcare -- essentially “Medicare for all” -- and, until it looked like he might actually become the Democrat nominee, almost no one in the left-wing media stood up to him. On the contrary, many media leftists -- such as Rachel Maddow -- agree with Bernie on Medicare for all. When Warren finally joined Bernie in the “Medicare for all” parade, Maddow and Matthews’ network, MSNBC, sang her praises.

According to Vox the reason Alexandria Ocasio-Cortez upset 10-term House Democrat Joe Crowley in New York’s 14th District was because she “championed Medicare-for-all (in addition to free college tuition and a jobs guarantee, among other progressive policies).” To no one’s surprise, Sandy O was one of Bernie’s earliest endorsers and is one of Bernie’s strongest supporters. To a large extent, Ocasio-Cortez, Bernie, and other radical leftists are now the face of the Democrat Party.

Media leftists, along with like-minded elites in the Democrat Party, have no one to blame but themselves for this. Their decades-long march to the political left -- almost always in opposition to the truth -- along with preaching a mountain of so-called “rights” in order to bribe Americans into voting for democrats, has also forced us to debate what is marriage, infanticide, how many genders exist, and who is a male and who is a female. Thus, such leftists should not be surprised that the electorate they’ve so “educated” prefers a legitimate socialist as their presidential nominee.