As I was about to begin writing about the sun shining on President Trump's re-election efforts, a dark cloud passed over my Twitter feed announcing that Rush Limbaugh has advanced lung cancer and will be taking time off for medical treatment.

What terrible news for the 30 million–plus weekly "Ditto-heads," faithful listeners to his daily three-hour commentary on news, politics, sports, and popular culture.  Rush "made the complex understandable," as he liked to say, using irreverent humor to make his points.  It was effortless for Rush, doing all of this with "half his brain tied behind his back." 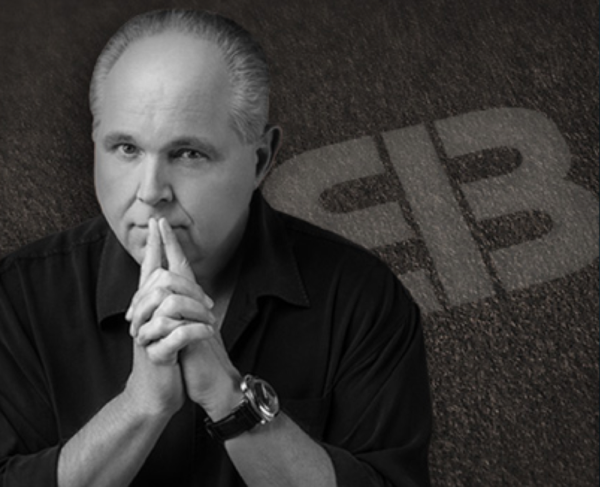 As a physician, hearing the words "advanced lung cancer" is frightening.  There are different types of lung cancer, ranging from bad to worse to horrific, none of them a walk in the park.  Advanced cancer often means that it is not removable surgically or else has spread to other parts of the body.

The details are important to Rush, his family, and his physicians, but they are not important for us.  For his listeners, who know Rush as a familiar voice on midday radio, all we know is that Rush has been abruptly removed from our lives, either temporarily or permanently, leaving an early afternoon void in our daily dose of the "Limbaugh Doctrine."

I was introduced to Rush in the early 1990s through my staunchly conservative parents, long departed.  They never experienced the lows of the Obama administration or the highs of the Trump presidency, but they faithfully listened to Rush every day, enjoying parodies of Ted Kennedy, "The Philanderer," and of Rush with his uncanny impression of Slick Willy, AKA Bill Clinton.

I enjoyed watching his early-morning television show back in the '90s and purchased several of his trademark neckties.  I read both of his books, The Way Things Ought to Be and See I Told You So.  Both bestsellers were a conservative manifesto, explaining clearly and concisely the issues of the day.

He laid out the goals of the radical environmental movement (Environmental Whackos) and the militant feminist movement (Feminazis) and, in his irreverent way, made fun of it all by saying he loves the women's movement, especially when walking behind it.

Rush was a counterweight to the near monopoly of the left in mainstream media, from network and cable news networks to the once-upon-a-time prominent newspapers like the New York Times and Washington Post, all accurately described by Rush as the "Drive-By Media."

One could listen for three hours a day, or less if you used his mobile app to download his shows, as I did, getting caught up on all the relevant news of the day.  Rush's ideas stewed in my brain and provided ideas for many American Thinker articles over the past six years I have been writing.

After listening to Rush for almost 30 years, I was able to hijack a piece of his brain that he tied behind his back, inserting it into my thick skull, assisting me when formulating ideas and putting them into type.  For Rush's unknowing assistance, I will be forever grateful.

Rush was more than just a voice on the radio.  He also shared his love of America with children through his "Rush Revere" children's book series.  He stood up proudly for the military and law enforcement, his "Stand Up for Betsy Ross Campaign" raising over $5 million for the Tunnels to Towers Foundation.

What now?  Cancer therapy is long and arduous.  Rush will undoubtedly find the best doctors in the country and fight as he has never fought before.  He has experience with past medical conditions, from his painkiller addiction to his hearing loss requiring cochlear implants.  During both of those treatments, his Ditto-heads were left wondering if and when Rush would return to his "golden EIB microphone," broadcasting from his "Attila the Hun chair" at the "EIB Southern Command."

His guest hosts are superb, many launching successful talk radio careers after guest-hosting for Rush, including Sean Hannity and Mark Levin.  My favorite of the current crop of guest hosts is Mark Steyn, both incisive and funny.  We will likely be hearing from Mark, Todd Herman, Mark Belling, Ken Matthews, and perhaps some new voices as Rush undergoes treatment.

We wonder the same about President Trump.  Unlike Rush on the radio, Trump has a time limit in the White House.  While he will be around hopefully and likely for another five years, nothing is guaranteed.  Trump too is subject to medical maladies flying out of left field.

What is the Trump succession plan?  Mike Pence, Mike Pompeo, Ted Cruz, or one of the House firebrands fiercely defending the president and fighting tooth and nail against the Democrat efforts to overturn the last election?  Or could it be someone not on the radar screen today?

Like Rush, Trump has accomplished so much in advancing the causes of liberty and freedom.  Both are striving to Make America Great Again, each in his own way.  They are unique and impossible to replicate.  The left has tried to create a left-wing isomer of Rush, but the best it could come up with is lightweights like Chuck Todd and Brian Stelter.  The Democrats too have tried to recreate a populist icon as their party's nominee for November but instead are stuck with a socialist, a fake Indian, a brain-addled groper, and a pint-sized mega-billionaire.

Just as Trump created an army of MAGA patriots, Rush has his own battalion of Ditto-heads, from "Rush babies" to "seasoned citizens," as he likes to say.  That's who must carry the conservative mantle for "El Rushbo" while he fights for his life.

So, let's keep up the fight against "Chuck You Schumer," "Debbie Blabbermouth Schultz," "F Chuck Todd," and "Struck Stroke Smirk," as Rush affectionately calls them.  Does anyone else use nicknames so effectively?  Ask "Nervous Nancy," "Pocahontas," or "Mini Mike."  Trump and Rush — twin sons of different mothers.

Hopefully, "Maha Rushi," the "Mayor of Realville" and "Doctor of Democracy," will soon return to his spot, "on the cutting edge of societal evolution," showcasing his "talent on loan from God."

Best wishes to Rush Limbaugh and his family, and Godspeed in his biggest challenge.

Brian C Joondeph, M.D. is a Denver-based physician and freelance writer whose pieces have appeared in American Thinker, Daily Caller, and other publications.  Follow him on Facebook, LinkedIn, Twitter, and QuodVerum.