Fact-checking Alexandria Ocasio-Cortez on the Presidential Medal of Freedom

Representative Alexandria Ocasio-Cortez (D-Cuba) couldn’t be bothered to attend the 2020 State of the Union address, but she somehow managed to find the time to record a short message harshly criticizing President Trump’s decision to award the Presidential Medal of Freedom to Rush Limbaugh in the wake of Limbaugh’s recent announcement of having advanced lung cancer. 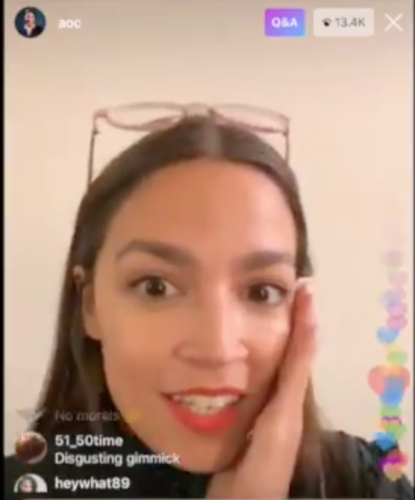 FACT-CHECKER RATING: Mixture, mostly false. It is true that Rosa Parks was awarded the Presidential Medal of Freedom (PMOF) by Bill Clinton in 1996. However, Lorne Michaels (creator of Saturday Night Live) was given his PMOF by Barack Obama in 2016. Does AOC not realize there are several categories for PMOF recipients? The PMOF to Rosa Parks was in the category of Politics and Government (activism); Michaels’ award falls in the Media category under television, and Limbaugh is only the third recipient of the award for radio, after Lowell Thomas and Paul Harvey.

I guess this all depends on how one defines the meaning of the word “sacred.”

FACT-CHECKER RATING: Pants-on-fire. One has to look no farther than the control booth of the extraordinarily successful Rush Limbaugh radio show to learn that the infamous producer and call screener “Bo Snerdley” is in reality a black man named James Golden. In fact, one of the reasons Limbaugh has been labeled as racist was because Golden introduced himself to the audience during a show segment as an “African-American in good standing and certified black enough to criticize Obama guy.”

Rush Limbaugh is neither a racist nor misogynist. He is hated and reviled by liberals such as Ocasio-Cortez because he is an unapologetic conservative voice so desperately needed at this moment in American history. Any listener of his show can attest to the fact that Rush has frequently praised Justice Clarence Thomas on the Supreme Court, and if memory serves correctly, Justice Thomas is black. While Limbaugh is unafraid to criticize, mock, and parody race-baiting hustlers like Jesse Jackson, Maxine Waters, Louis Farrakhan, or Al Sharpton, he often speaks of economist Thomas Sowell in almost reverential tones, and professor Walter Williams has also served on multiple occasions as a guest host on Limbaugh’s radio show.

I wouldn’t even know the name of Dr. Williams if it hadn’t been for Rush Limbaugh. Nor would I own a copy of Dr. Sowell’s great book Basic Economics if Limbaugh hadn’t interviewed him for his monthly publication, The Limbaugh Letter.

Claim: “…to give it (PMOF) to Rush Limbaugh when there were plenty of people in that audience that have contributed positively to the fabric of American society much more, frankly, than he has.”

FACT-CHECKER RATING: Mostly false. General Charles McGee was in the audience, but it is highly doubtful that Ocasio-Cortez was thinking of him, if indeed she was thinking at all.

Name one member of Congress who has done more for America than Rush Limbaugh. I sure can’t think of anyone currently serving worthy of comparison. The only person in the room who comes close is the guy making the speech, and Limbaugh’s been an outspoken advocate for conservatism for more than thirty years.

Claim: “Trump wants to assert that somehow Rush Limbaugh is on the same level as Rosa Parks, and it’s truly nauseating. This is one of the many reasons I did not go…”

FACT-CHECKER RATING: Pants-on-fire. The only person who has mentioned Rosa Parks and Rush Limbaugh in the same sentence has been Ocasio-Cortez. Once the idea that the PMOF was some sort of a “sacred” honor reserved only recipients worthy of comparison to Rosa Parks started rattling around in that pea-sized brain of hers, she couldn’t let it go.

Donald Trump never once mentioned Rosa Parks during his State of the Union address. It’s probably safe to say he wasn’t even thinking about her while in the process of honoring Rush Limbaugh. For the record, he probably didn’t think about Lorne Michaels, Bob Dylan, Oprah, or any of hundreds of other recipients of the PMOF who surely aren’t worthy of comparison to Rosa Parks by Ocasio-Cortez’s standards, either. He was probably only thinking about Rush Limbaugh, like most other normal people would be doing in the same situation.

On Twitter, Ocasio-Cortez promised that she would stay away from the State of the Union address because she didn’t want to legitimize Trump’s presidency. Later, on Instagram, she claimed that part of her reason was to avoid the ceremony for Limbaugh—which she said was public knowledge well before Trump’s speech. So, why didn’t she mention it on Twitter before the address, if she really knew it was coming and wasn’t just using it as an excuse?

Now, we can only hope the voters of New York will give her a reason to miss Trump’s State of the Union address next year by electing someone else in November to replace her.

John Leonard writes novels, books, and occasional articles or blogs for American Thinker. You may follow him on Facebook or his website (and blog, which includes the AT “rejected” pieces) at southernprose.com.