One of the first acts of Barack Obama's presidency was to send back to Britain a powerful Oval Office sculpture of Winston Churchill, looking beetle-browed and determined, the way Churchill really looked when he was defying Hitler. 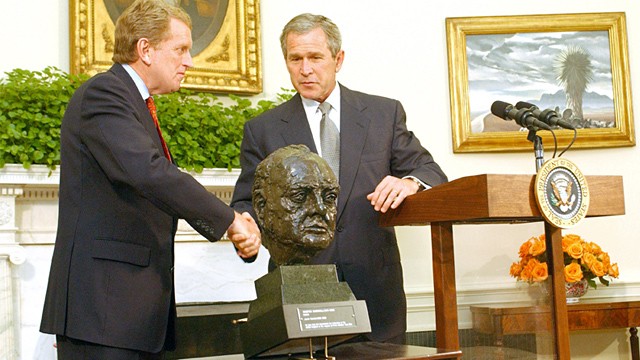 At the time, Obama's gesture seemed another little eccentric footnote to this extremist administration. After all, Obama's Dreams from My Father celebrates his biological father who abandoned him as a baby, to return to Kenya after the terrorist Mau Mau Jono Kenyatta  came to power. Obama Sr. soon fell out with Kenyatta, was purged from the regime, and managed to have two consecutive drunk driving accidents, the second of which killed him.

In the real post-colonial world, Obama's Leninist ideology is completely passé.  India's Prime Minister Singh is a free market economist. Over there, English is still the language of politics and commerce, and free market policies have created a sustained economic boom. China is no longer rigidly Marxist either, and it is booming using free market principles. The real talents of individuals in India and China now have a greater chance to flourish.  In Russia, Putin has introduced a 14% flat tax, and is boosting traditional morality.  Only Obama still harbors that old post-colonial rage against white imperialists, which is why he can't tell the difference between murderous terror gangs and democratic revolutions.  Iran is ruled by a corrupt and evil priesthood, opposed by hundreds of thousand of young people who look to the civilized world for hope.  After Obama's Geneva Surrender we know that he honestly can't tell the difference between reactionary murder regimes and modern peoples.

For civilized people Al Qaeda is a mass child-murdering criminal gang, a horrific throwback to a dark and bloody past. Photos of AQ's slaughtering innocent children, women old people in the Syrian Christian village of Maloula have gone viral all over the web. The mall massacres in Nairobi, Kenya showed a primitive murder gang head-chopping black and white Africans alike, and those pictures were flashed around the world as well.  Normal human beings of all faiths were terribly shocked, including many civilized Muslims.

But for Obama Al Qaeda is just like the Mau Mau terror group, who beat the British in Kenya by slaughtering white farm families in acts of horrific terror.

Obama truly is not like us; his beliefs are utterly alien to our political tradition.

That is why this administration violates all the rules.  It is not an accident. It is simply who they are.

The act of sending the bust of Churchill back to Britain signaled Obama's hatred for the Anglo-American political tradition, including the US Constitution.  So far only one prominent liberal has expressed open outrage -- Nat Hentoff, the civil liberties advocate who used to write for the Village Voice.

Obama's recent Geneva Surrender to the primitive Mullahcracy is still being seen by millions of dope-addled American airheads as the road to peace.  So what if the Saudis are terrified about Iranian nuclear weapons that are now within the grasp of the mass-murdering mullahs?  So what if Israel is now surrounded by 170,000 missiles in the Iranian Crescent?  So what if the Geneva Surrender was instantly violated by Russia breaking the sanctions against Iran?

The media won't tell you this, but that solemn seven-power "peace" agreement broke down within days.  John Kerry is now insisting on dismembering Jerusalem and the West Bank as a sop to please the worst totalitarians, an exact copy of the Surrender to Hitler that started World War Two.  The nuclear horse is out of the barn, after sixty years of successful American efforts to thwart nuclear proliferation to mad regimes.  Obama has welcomed Iran to big power nuclear status in the Middle East.  The libs call this "diplomacy" but it is abject surrender to evil.

The Saudis remember that Ayatollah Khomeini tried to overthrow their regime during the Muslim pilgrimage to Mecca, the hajj.  They know the mullahs want to control Mecca and Medina, and thereby run the entire Sunni world, 80% of Islam.  Arab-Persian hatred is ancient and enduring.

Obama's little spiteful act of returning the bust of Churchill signaled this whole administration's gangster approach to governance.  Winston Churchill, for all of his human faults, was still the greatest defender of civilized values against Nazi and Stalinist tyranny.

Fortunately Churchill spoke prophetically about tyrant-appeasers like Obama and Kerry.  We have his prophetic words when Prime Minister Chamberlain came back from the Munich Surrender:

"You were given the choice between war and dishonour.

You chose dishonour, and you will have war."

One tick of history later and Hitler invaded Poland in alliance with Stalin.

Against the consistent advice of our best military officers, Obama has surrendered -- and surrendered to the most radical and fanatical mass murdering regimes in the Middle East.  For five years the United States had an open window of opportunity to set back the Iranian nuclear program with minimal risk -- just the way we stopped Saddam from developing his nuclear program, using sanctions and a no-fly zone.  Now that window of action has slammed shut.

If you want to see who won that confrontation, just look at the laughter on the faces of the mullahs today.  They look drunk from their victory.  Mullah Rouhani can't stop laughing.

Obama is a malignant narcissist, and therefore dangerous.  The Democratic Party, which has known all about Obama for years, must have known about his openly confessed radical Leninist ideology.  Today senior Democrats are leaving Congress for fear of the voters' revenge.  They know exactly what they have done, just as Ted Kennedy knew how to undermine our borders and immigration laws during his decades in the US Senate.

These people act with malice aforethought.  That is why they are allied with the Muslim Brotherhood, and maybe the Iranians as well.

Maybe there will be a miracle that spares the world from another major war.  We all hope so. But if Obama's arrogant fiasco comes tumbling down and war does break out in the Middle East, conservatives must remind America of Churchill's prophecy of 1938 and Obama's dishonor.