President Obama has broken many promises. One that he has not broken is his boast that he would "fundamentally transform America." He and his fellow Democrats are on the verge of doing just that by turning us into a nation of loafers.

A loafer is an idle person who lives off others.  Barack Obama seemingly has no problem with such people. He might even relate to them. He does have a serious problem with his own work ethic, and finds work boring.  He also denigrates the work of others who build businesses through dint of hard work and risk-taking ("You didn't build that"); talks incessantly of "fat cats" on Wall Street; embraced the Occupy Wall Street Movement of squatters  and pumped up their own inflated self-importance by telling them "You are the reason I ran for office"; and accuses doctors of running up the tab by, among other evils, taking tonsils out for money instead of  diagnosing problems as allergies). He has yet to speak critically of union leaders, class action lawyers and others who run up the tab for all Americans because they are, after all, the Democratic Base.

But Obama and his Democratic Party allies seem to be gleeful about the rise of the loafer class. Recent revelations from the Congressional Budget Office bear witness to this phenomenon. When the CBO's prognosis on the future of Obamacare revealed that the equivalent of 2.5 million jobs would be lost because the provisions of the law would create disincentives to working (as well as hiring) what was the response from the left side of the political spectrum?

Investor's Business Daily listed a few of them in The Left's Lamest Defense of ObamaCare Yet:

Jason Furman, Obama's Chairman of the Council of Economic Advisors, also tried to spin these projected job losses into good news by saying ObamaCare would allow workers greater "choice." Furman said, "This is not businesses cutting back on jobs. This is people having new choices."  If taxpayer-funded health insurance encourages some people to work less, "that, in their case, might be a better choice and a better option that what they had before."

Then-Speaker of the House Nancy Pelosi unwittingly revealed this goal years ago in a comment that unsurprisingly got little airplay in the mainstream media when she toasted the fact that the health care reform that she and her fellow Democrats forced down America's throat would be a godsend for the "creative class":

Think of an economy where people could be an artist or a photographer or a writer without worrying about keeping their day job in order to have health insurance.

Yes...think about it! The lady from San Francisco does not think about the plumbers, contractors, accountants, sanitation workers and legions of other Morlocks toiling away for the benefit of artistic Elois and their patrons. Maybe performers can be hired to entertain government bureaucrats during over-the-top government junkets, or for IRS training films, or sculpt artwork that can be sold at outrageous prices  to grace American embassies across the world for the delectation of Obama donors-ambassadors.

Well, these people's choice to work  less in order to qualify for subsidies to pay their health insurance premiums means that other people are paying for their liberation from work and from the responsibilities of being an adult and an American (at least what used to be considered an American). But such a goal is very attractive for loafers.

ObamaCare also makes it very appealing for children to be coddled by their parents. Instead of becoming fully-functioning adults, paying their own way in the world, they can stay under their parents' insurance policies until the age of 26-further reducing the incentive to mature out of loafer-dom. Paul Ryan noted this sad state of affairs at the Republican National Convention:

College graduates should not have to live out their 20s in their childhood bedrooms, staring up at fading Obama posters and wondering when they can move out and get going with life.

More 27-year olds are living in their parents' basements than with roommates-and this is true for college graduates, as well.

But what if the Democratic Party does not want them to be anything other than loafers? That can be a very appealing prospect for many people.

After all, Obama telegraphed his goal in 2008, making a Kinsley gaffe (a politician accidentally telling the truth) when he went off the teleprompter and told Joe the Plumber that his goal was to "spread the wealth."

How have Obama and his fellow Democrats achieved that goal? Count the ways:

A record number on disability were getting the highest-ever monthly benefits;

Labor Force participation rates have declined; people not in the labor force are at a record 91.8 million;

Democrats are encouraging people to get on the government dole at an early age. High-school students are constantly exhorted to go to college.

John Kerry typified the view of liberals when he told a crowd of Ohio voters:

You know, education, if you make the most of it, if you study hard and you do your homework, and you make an effort to be smart, uh, you, you can do well. If you don't, you get stuck in Iraq.

Barack Obama has repeatedly said that he thinks everyone should go to college -- seemingly oblivious to the reality that college may not be appropriate for everyone. Millions of people have come out of college with degrees that do not lead to jobs but have led to unsupportable debt loads. Collectively there may be more than a trillion dollars in student loan debt -- and it is a growing menace to the health of America. But the federal government has continued to feed the beast because colleges may not to lead to jobs but do lead to many more Democratic voters. Democrats have hinted of future plans to wipe away the debt of college students --effectively transferring the debt to taxpayers.

"Don't leave money on the table," Mrs. Obama said. "Almost everyone is eligible for some form of financial aid, and all you have to do to access that aid is fill out this one little form. It's so simple."

"Through FAFSA [Free Application for Federal Student Aid], the Department of Education provides more than $150 billion every year in low-interest loans, in grants that you don't have to pay back, and work study programs that can help cover your educational expenses,"

Mrs. Obama, however, emphasized that there are "thousands of dollars to help you and your family pay for college," and that students could receive federal aid regardless of how well they perform in school or even if their families are not at poverty level.

Yet student loan defaults continue to skyrocket. One day the bubble will burst and Republicans will be handed the blame.

If the cliché that insanity is doing the same thing over and over while expecting a different result is true, then the Obama administration is certifiable (that's okay since mental health care is covered by Obamacare and by the time he finishes his second term many Americans will be seeking mental health professionals). Obama's pick to head the Federal Housing Finance  Agency, former Congressman Mel Watt, has made clear his intention to spend taxpayer dollars to help otherwise unqualified home buyers to purchase homes. Formerly, one had to work and get a good credit rating to be able to take out a mortgage and purchase a home. Not anymore. There is a new sheriff in town and he is not interested in enforcing reasonable and sound credit standards and rules .

The administration is also pressuring banks, and cities to make it far easier for people to buy cars and homes -- regardless of how sensible and sustainable such purchases and loans may be or how solid the job prospects are for purchasers.

Obama has used his executive authority to gut workfare -- one of the great bipartisan reform efforts over the years to transform welfare and get people off the government dole and into the workforce.  Barack Obama also subtly changed the federal definition of "poverty" so that many people on welfare don't have to "worry" about being dropped from the welfare rolls, secure in the knowledge that the checks from taxpayers will continue to flow.

So when Republicans declare their goal is to grow the economy and create more jobs and thus more taxpayers, they lose the loafer vote.

And when Democrats are in the forefront of legalizing marijuana even for non-medical purposes they gain the loafer vote. As the liberal Washington Post columnist Ruth Marcus wrote:

"...persistent cannabis use was associated with neuropsychological decline broadly across domains of functioning, even after controlling for years of education." Long-term users saw an average decline of eight IQ points.

Once again, teenage toking was the problem. The decrease in IQ was linked only to those with adolescent marijuana use, not those who started in adulthood

Barack Obama was a member of the Choom Gang in his fancy Hawaii high-school. One wonders if those effects can persist?

Didn't Obama make clear he was all out for the loafer vote -- and that his goal was to create another class in America, the loafer class?

After all, wasn't his animated campaign pitch "The Life of Julia" celebrating cradle to grave dependency on big government (the role of taxpayers was left on the cutting room floor)? 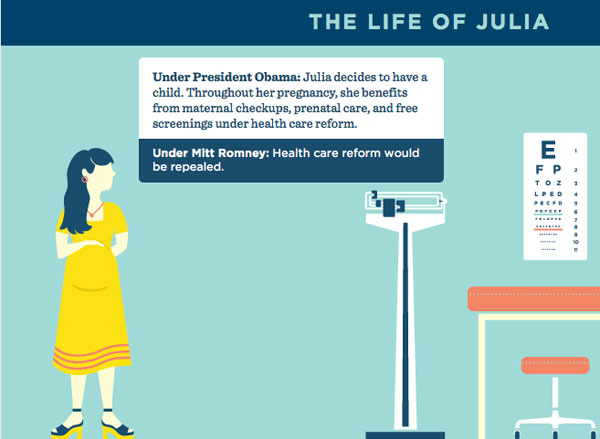 Isn't Julia's perfect match, Pajama Boy, a poster child for the loafer life: lolling about in PJs, sipping hot chocolate, advocating Obamacare at Thanksgiving instead of, say, talking about his job? 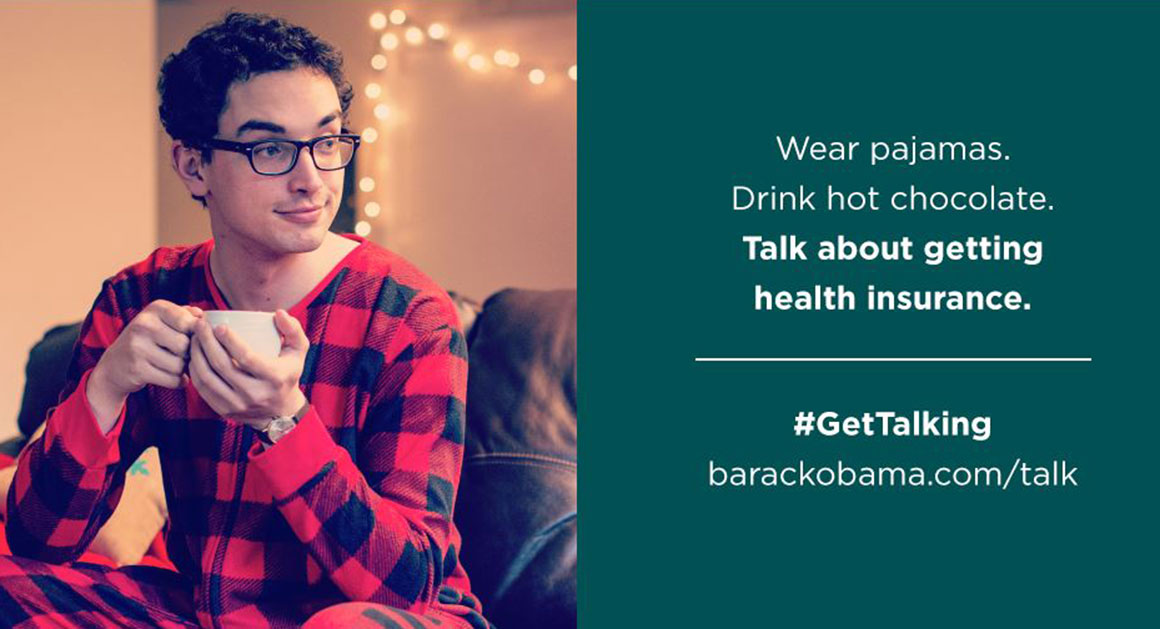 But it's hard not to see Pajama Boy as an expression of the Obama vision, just like his forbear Julia, the Internet cartoon from the 2012 campaign. Pajama Boy is Julia's little brother. She progressed through life without any significant family or community connections. He is the picture of perpetual adolescence. Neither is a symbol of self-reliant, responsible adulthood.

And so both are ideal consumers of government. Julia needed the help of Obama-supported programs at every juncture of her life, and Pajama Boy is going to get his health insurance through Obamacare (another image shows him looking very pleased in a Christmas sweater, together with the words "And a happy New Year with health insurance").

The breakdown of marriage and its drift into the 30s mean there are more Julias and Pajama Boys than ever. The growth of government feeds off this trend, and at the margins, augments it.

In other words, they are loafers.

But wouldn't Pajama Boy, though androgynous in a metrosexual way, be more suited as Julia's mate? Barbie had Ken; Eve had Adam. Addicted to Other People's Money, mainlined by Democrats, hooked at an early age they could have the politically correct two children and raise them as True Believers in Big Brother.