Warning: mysqli_free_result() expects parameter 1 to be mysqli_result, bool given in /var/www/html/americanthinker/admin/common/functions/func.general.php on line 126
 Leading British Conservative: Immigration Makes Us 'Give Up Our Culture and Identity' - American Thinker
|

Leading British Conservative: Immigration Makes Us 'Give Up Our Culture and Identity'

America is not the only nation roiled by immigration debates.  England, like many Western nations, is also in the midst of a heated one.

Douglas Murray, one of England's leading conservative intellectuals, has just made a major contribution to the discussion in his country.

In a thought-provoking speech, Murray argued that the people of England are "giving up our culture" and "giving up our identity" due to high levels of immigration.  He warned that soon, we may unfortunately say that "the peoples of Britain and Europe have lost their place in the world."

The forum for Murray's speech was a debate in Oxford University in January.  "It's going to require quite a lot of fairly clear, tough, frank thinking" for Britain to confront questions about immigration, Murray began.  He pointed out that he is "not against immigration," but that the speed and rate of immigration have been far too high for far too long.

Past waves of immigrants came in the thousands, while the foreign-born population in England and Wales today numbers in the millions. Murray's point is illustrated by the chart below, showing that the foreign-born share of the U.K. population has doubled over the past few decades. 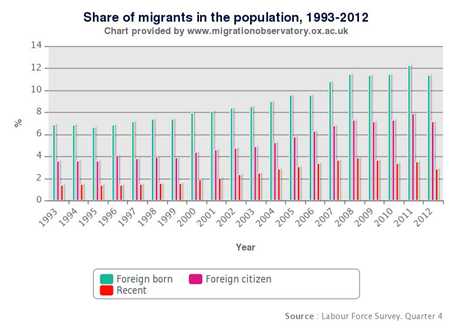 The point Murray makes is overlooked by pro-amnesty conservatives here in the states.  As the graph below shows, in the American context, the foreign-born percentage of our population is approaching an unprecedented level. 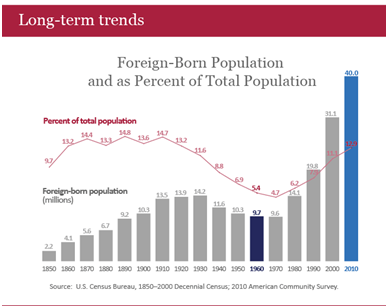 Taking aim at what has become a dogma among Western elites, Murray went on to reject the notion that England is "a nation of immigrants."

There is a motif that this country has always been a nation of immigrants. That is not true. It is not true. For most of this country's history, there was a very homogenous group of people on these islands. The idea that what is happening now is what has always happened is simply a fib.

While some of the U.K.'s immigration myths are similar to our own, unlike in the U.S., the major British parties have both spoken out against mass immigration.

"There is complete political unanimity" that levels of immigration are too high, observed Murray.  To prove his point, Murray quoted the two highest-ranking members of the U.K.'s opposing political parties, along with another major liberal figure.

Current Prime Minister David Cameron last year said, "[U]nder the previous government immigration was far too high and badly out of control."  "Net migration needs to come down radically...from hundreds of thousands a year to just tens of thousands," according to Britain's PM.

"One spectacular mistake in which I participated (not alone) was in lifting the transitional restrictions on the Eastern European states like Poland and Hungary which joined the EU in mid-2004," Straw admits.

Murray concluded with thought-provoking comments on what immigration has done to England's national identity and the very premise of "our values."

"When you have migration at the rate this country has had it in recent years, you have to expand and water down your definition of what you are because you have people coming in so fast that what would have been your definitions of yourself stop holding," he said.

If you asked them 50 years ago, most British people could have given a strong definition of Britain's national identity, Murray said.  The Church of England, Parliament, trial by jury and the high courts, and the monarchy would have been at the top of the list.

Why is it now that we have this big endless debate, "Who are we, what are we"? It's because we want to welcome people but it's happened so fast we have to end up doing things like saying Britishness is about "fair play" or "being nice to people."

He warned that high levels of immigration undermine a sense of shared national identity, saying, "We water [national identity] down because it's what we think we have to do... it has become very difficult to say what Britishness is or can be or should be for people when immigration happens at this kind of rate."

Many Britons, "including first and second generation immigrants now say there is a problem with the speed of immigration because it changes the country."

It makes little sense to talk about "our values," Murray said, in a nation where people are not assimilating.  In fact, Murray suggests that economic arguments in favor of immigration have become so common precisely because the broader impact of immigration has been unfavorable:

It is all very well to say that we are open to people who share our values. But if our values are watered down and the people who come here come at the rate they have, it is not surprising that we will end up arguing for immigration as an economic thing because we will be giving up our culture, we will be giving up our identity, and we will be saying what some people now do say, which is that the peoples of Britain and Europe have lost their place in the world.

"I think it is right for people to have a place they call home, an identity that they are proud of. I think it for all people around the world, and I think it for the people of this country," Murray concluded, to rousing applause.

John Bennett (MA, University of Chicago, Master of Arts Program in the Social Sciences '07) is a writer whose work has appeared in The Daily Caller, Townhall.com, World Net Daily, Human Events, Accuracy in Media, and FrontPage Magazine, among others.  He has been a featured guest on the Laura Ingraham, Jerry Doyle, and Lars Larson programs.