Gender Madness Taking Over the Military and Schools

There are those in this country who view any separation of the genders along any lines at all to be discriminatory. They literally view the words, "MEN" and "WOMEN" above bathroom entrances in the same vein as signs in the 1940′s that read "WHITES" and "COLOREDS" above those same doors. Our founding documents and most of our core personal beliefs reinforce the understanding that all men (and women) are created equal. But is equal, equivalent? According to Merriam-Webster:

EQUIVALENT
1 : equal in force, amount, or value; also : equal in area or volume but not superposable
2 : like in signification or import
3 : corresponding or virtually identical especially in effect or function
4:  equal in might or authority
5 : having the same chemical combining capacity

By this definition women and men are anything but equivalent. However, the unrelenting drive by the politically-correct left to somehow make us, to force us into equivalency knows no brakes. In fact it's an ideology and movement that has its foot firmly on the gas pedal.

In the recent past this faction of political thinkers were known as the "lunatic left" and other such terms. They existed on the fringe of the federal and state legislative conscience and as such could largely be ignored. No longer. They're finding avenues to move the notion of gender equivalency not only into mainstream thought and legislative agendas but into our national security and even into the lives and education of our children.

The move, prompted by a lawsuit brought by the ACLU (imagine that!) overturns a Pentagon policy restricting women from serving in combat, specifying they may not be assigned below the brigade level -- a unit of about 3,500 troops -- to fight on the ground. Effectively, that has barred women from infantry, artillery, armor, combat engineers and special operations units of battalion size -- about 700 troops -- or lower. Our armed services now have until January 2016 to implement the changes. Each service will be charged with developing policies to integrate women into every military job.

This opens an entire new galaxy of questions and concerns. The most obvious was posed by an officer in the U.S. Army who simply stated, "The question you've got to ask yourself every single time you make a change like this is; Does it increase the combat effectiveness of the military?"

Despite the drive to try and make it so, the fact remains that men and women are not equivalent. Especially not physically equivalent. On average men are bigger, stronger, have a greater amount of muscle mass and therefore greater capacity for physically taxing tasks. Men have about 9 pints of blood in our bodies, women only about 6. Meaning the male cardio-respiratory system is more capable of delivering oxygen to working tissue, thereby resulting in greater stamina/less fatigue and an overall superior ability to perform in the sorts of difficult environments that infantry and other such operational units often find themselves.

Of course our armed services know this and have made necessary adjustments to accommodate this basic anatomical fact. For instance, consider physical fitness testing requirements for men and women. All soldiers in the U.S. Army must attend Basic Training and pass a fitness test in order to graduate out. The Minimum Army Basic Training PFT requirements for a male aged 17 to 21 years are: able to perform 35 pushups, 47 sit ups, complete the 2-mile run in no more than 16 minutes and 36 seconds. For a female of the same age the minimum requirements are: 13 pushups, 47 sit ups, and complete the 2-mile run in no more than 19:42.

The United States Marine Corps (pronounced "core") has slight variations. To complete Marine Basic Training PFT a 17 to 26 year old man must be able to: perform at least 3 pull ups, perform 50 crunches and complete a 3-mile run in 28:00 minutes. Females are not required to perform any pull ups at all but rather be able to: maintain a "flexed-arm hang" for 15 seconds. They have 31 minutes in which to complete the 3-mile run.

Why the differences in standards? Of course the answer is obvious.  So does introducing women to front-line combat positions strengthen our military capabilities? Debatable, to be sure. That the law of unintended consequences is destined to rear its ugly head one day is not.

Envision a male soldier fails his fitness test. He's required to complete the 2-mile run in 16:36 and come test time is able to muster only a 16:45. He gets washed out of his unit for failure to meet minimum requirements. But at 16:45 he is easily within the minimum requirements for his female counterparts. Why should he lose his job for running a 16:45, but a woman in his unit be able to keep hers while running a 19:40? It's only a matter of time until a soldier in such a predicament lawyers up and sues the U.S. Army for discriminatory practices.

Field applications of this decision are unimaginable. Commanders of combat units now have to worry -- at least at some basic level -- about providing an adequate level of privacy for issues relating to personal hygiene that he's never had to think about before. Consider a unit in retreat (or pursuit) moving in intense heat, over rough terrain, wearing full Kevlar, each carrying a 55 lb. pack and an M-16. Such a unit can only maintain the pace able to be kept by its slowest member. As previously mentioned, the reality is women's bodies are not capable of moving the same volume of oxygen as men's, meaning the commander of such a unit has to make choices; either slow the pace, thereby placing everyone in the unit at risk of being overtaken or press on and leave the female(s) to fend for themselves and potentially be captured.

Of course in such a situation there is no choice. The United States Military does not leave a comrade behind. These are very real issues that the boots-on-the-ground command will now have to deal with as a result of the ACLU's drive toward gender equivalency. The question to be asked still looms, does making women equivalent to men increase the combat effectiveness of the military?

Closer to home we have California Assembly Bill 1266. Legislative lunacy coming from the Golden State is certainly nothing new, but this law, which took effect last month affecting California's schools and school-aged children, is a doozy even by Cali's lofty lunatic standards.

Penned the "School Success and Opportunity Act", according to SFWeekly, AB1266 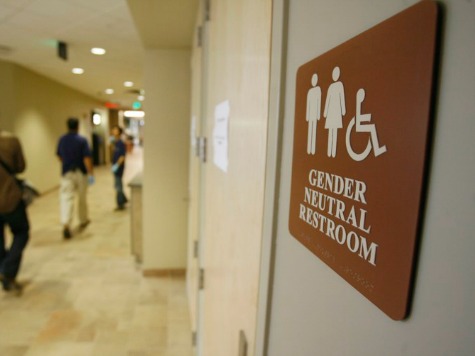 "...ensures California's transgender youth can fully participate in school activities and use facilities that match their gender identity regardless of what their gender is listed as on school records. In other words, a female student who identifies as a male can now use the boy's bathroom at California public schools."

The notion that gender is decided at conception is gone. No longer does your plumbing matter; all that really matters is the plumbing you "identify" with. A boy who claims he "feels like he should have female reproductive parts" is now free to use the girls' bathroom and locker room in California public schools. And vice versa for females.

Just like the military's decision and as is the case with all bad policies, it's just a matter of time until backfires ignite. The specter of hormone-fueled 17 year-old boys walking into locker rooms with 13 year old girls in various states of undress is a pending disaster all can see coming. It's going to happen.  Children are going to get harmed -- if not physically, then most certainly psychologically.

Women and men are equal but not the same. Equal but not equivalent. A man and a woman are wholly, completely and totally different creatures. Physically, emotionally, chemically and no small variety of other ways. But the leftist forces are undaunted. All of these obvious truths have no effect on the drive to enact this "gender-equality" dogma.  It's a shame that adults bent on asserting a progressive agenda are willing to do so at the expense of our nation's security and our children's right to innocence and safety in their places of learning.