Republicans won California in every presidential election of the '50s, '60s, '70s, and '80s, except for the '64 Goldwater loss.  Now California has a third-world economy with one-party dominance.

The pro-amnesty Republicans should think clearly about what happened to the Golden State.

Today, California's GOP has withered to a small fraction of the state's registered voters.  Since the state began tracking party affiliation in 1922, Republicans have never had such a low share.  Republicans are now 29 percent of voters; Democrats are 44 percent.

But California did not go quietly.  In 1994, California voters, and governor Pete Wilson, tried to eliminate the incentives for illegal immigration with Proposition 187.  Prop 187 sought to prevent people from receiving social services or public education until they were verified as U.S. citizens.  Law enforcement agencies were to report illegals to state and federal authorities.

The proposition passed by a stunning 59%-to-41% margin in 1994.  However, by 1999, Prop 187 was invalidated by court rulings pushed by liberal organizations.  California is now known as Mexifornia.

How could the state that passed Prop 187 and had been a stalwart for Republican presidents have fallen so far? 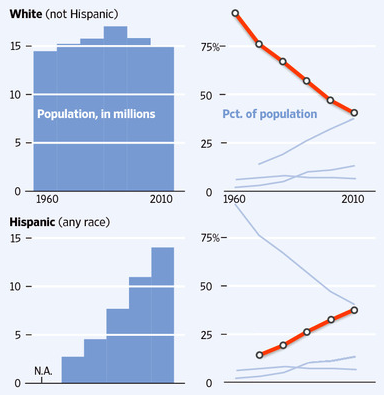 California was a red state, but as the Hispanic population increased, it became a blue state, and it has remained so since.  There is no sign of going back; the mainstream press gloats that California is "a one-party state."

The state Republicans died out not because of inevitable demographic changes; the outcome could have been different.  Nor did they die out because they were not "sensitive" enough to Hispanics, as former national GOP Chairman Marc Racicot said with reference to Prop 187.

California was faced with a choice: stop the influx of welfare-state constituents, or be washed away by the growing welfare state.  The problems stemming from illegal immigration were so great that even the liberal Urban Institute acknowledged, in a 1994 report, that one in five inmates in California state prisons were deportable aliens [1].  Bill Clinton, in a 1994 speech in California, told his audience, "[I]t is not wrong for you to want to reduce illegal immigration."

Prop 187 was an attempt to address a set of challenges tied to illegal immigration.  By 2002, the state was "struggling to balance a budget saddled with costs for illegal immigrants' education and health care," as the Wall Street Journal reported.  Wilson and the 59% of voters who supported Prop 187 were vindicated on the merits.  However, given the gradually changing population, the statists sidestepped the merits and won through superior numbers.

Now, a decade later, there is no struggle to balance the state's budget.  There is only a Democratic supermajority, more spending, more debt, and what the Associated Press calls a Hispanic population that increasingly lives in "racial isolation."  All the while, this population is "[a]ssimilating into the welfare system," according to Harvard economist George Borjas.

California's Shift to a Third-World Economy

The state has even witnessed the indignity of ostensible Americans booing our national anthem in the 2011 USA-Mexico soccer game, played in Pasadena.  The L.A. Times reported that U.S.A. "fans were vastly outnumbered" by Mexico's fans, "many of them being U.S. residents whose lives are here but whose sporting souls remain elsewhere."

The U.S. "national anthem was filled with the blowing of air horns and bouncing of beach balls," reported the L.A. Times.  The U.S. coach said that the game was "a home game for" Mexico.

One California resident, a Mexico fan, said, "I love this country, it has given me everything that I have, and I'm proud to be part of it," but added, "I was born in Mexico, and that is where my heart will always be."  As ever, the revealed preference is the one that counts.

Along with their hearts, many of the immigrants have brought with them low education levels, low skill levels, and overwhelming support for big government, which cannot be a coincidence, given the massive levels of leftist state control found in Latin America.

State control has swept over California, together with sustained high levels of immigration from Latin America.  The resulting crisis is summed up by Stanford professors Michael Boskin and John Cogan:

From the mid-1980s to 2005, California's population grew by 10 million, while Medicaid recipients soared by seven million; tax filers paying income taxes rose by just 150,000; and the prison population swelled by 115,000.

The Golden State has 12% of the country's population and one third of its welfare recipients.  California's middle class is decimated.  The growth of government services and regulation, together with downward pressure on wages, had the predictable outcome.

As the chart above shows, there was not a sudden population shift in California.  The number of whites, who provided the bulk of the GOP vote, didn't drop enough to explain the political outcome.  Instead, there was a steady and significant increase in the legal and illegal immigrant population over several decades, a population which no amount of GOP outreach or sensitivity was going to turn into Burkeans.

That is how the Republican Party was destroyed in California, how the state plunged towards a third-world economic model, and why overall immigration needs to be reconsidered.

John Bennett (MA, University of Chicago, Master of Arts Program in the Social Sciences '07) is a writer whose work has appeared in The Daily Caller, Townhall.com, World Net Daily, Human Events, Accuracy in Media, and FrontPage Magazine, among others.  He has been a featured guest on the Laura Ingraham, Jerry Doyle, and Lars Larson programs.