According to Breitbart.com, dozens of posters of President Obama with a golf club and a caption "Sub Par" have been spotted outside the PGA's golf tournament near the Riviera Country Club in Los Angeles, as well as near Pacific Palisades and Santa Monica, California, all of them upscale and liberal enclaves.

A quick web search discovered a number of other locations in LA with "Sub Par" posters pasted over signal boxes, hanging from the wires and lampposts on busy intersections, glued to park benches, and even attached as small stickers to the walls of public bathrooms. This bears all the marks of an anonymous guerilla street art action by local artists. 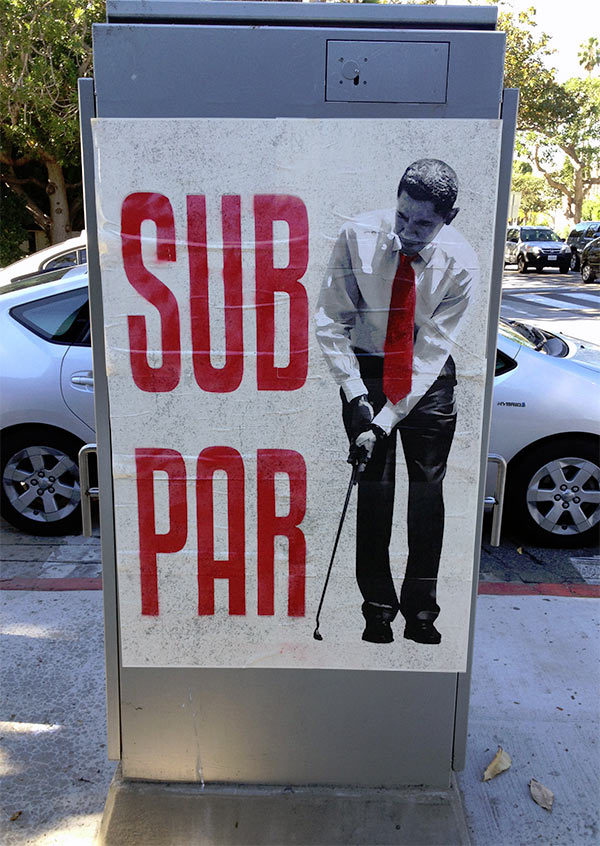 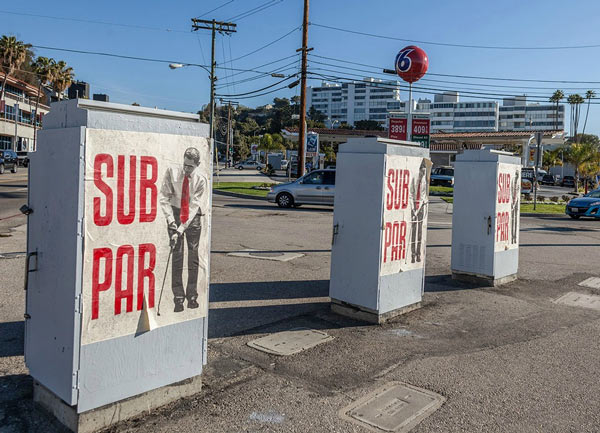 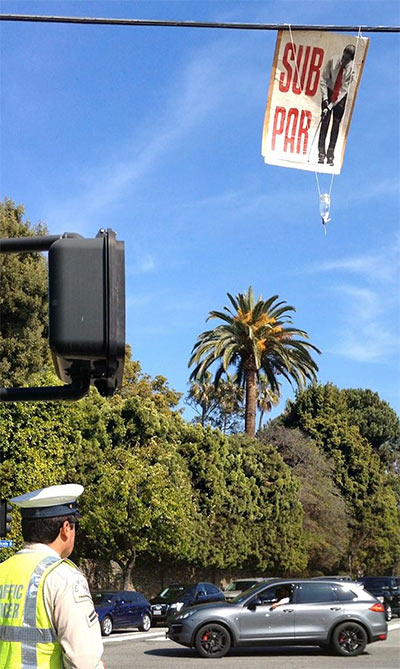 Photos of these posters, hangers, and stickers are beginning to appear on several websites, but this one is by far the most complete collection we could find. There is also a short YouTube video of a street cop making a comment about one of the hanging posters.

No one is claiming responsibility for this gutsy guerilla art project, and with a very good reason: in the heart of a Democrat-run city financed by Hollywood studios, any artist engaging in such "counter-progressive" activities would do well to remain anonymous.

In spite of the self-righteous promotion of tolerance and diversity by the "progressive" elites, they themselves tend to rule with a humorless iron fist of religious zealots, intolerant of any deviation from the dogma (unless the Party dogma transmogrifies; then you're expected to transmogrify with it). And there's hardly a deadlier sin in their bible than mocking a "progressive" deity, one of whom unquestionably is Barack Obama.

A Stalin-like intolerance of all dissent and religious worship of "progressive" icons is most rampant in such strongholds of progressivism as news media, academia, and especially the arts. An artist who refuses to conform and rebels against the "progressive" establishment gets immediately blacklisted, subjected to a witch hunt, shunned by his colleagues, and ultimately loses any chance of further employment in the industry.

Some of my artist friends among conservative bloggers are forced to withhold their real names so they can continue to feed their families. Losing anonymity for them would mean never to be able to find work in the arts again. The latest first-hand testimony of "progressive" Hollywood blacklisting can be found in a recent excellent essay by Andrew Klavan, a conservative filmmaker who urges conservatives to invest in alternative conservative arts because, as Breitbart liked to say, politics is downstream of culture.

While Klavan's emphasis is on the eternal nature of the art telling us the truth about our human nature, some utilitarian subsets of the arts, such as the political poster, are not to be dismissed either. The left has gained great mileage with visual agitation and propaganda, which communist countries like the USSR had developed into a standalone art genre.

In the United States, political poster artists such as Shepherd Fairey, Robbie Conal, or Banksy absurdly made careers while promoting the leftist ideology through the arts -- absurdly because their allegedly "counter-culture" and "anti-establishment" message was cheered on and often sponsored by the cultural establishment itself, which today is almost entirely made of formerly rebellious "anti-establishment" leftists.

The palpable irony of today's historical moment is that the formerly cool, underground iconoclasts of the Left are now the oppressive, stodgy establishment. The tables have been turned by the invisible hand of historical necessity, but not in a revolution that Marxists had planned.

Today's truly rebellious, free-thinking, edgy and cool, counter-culture anti-establishment movement is entirely on the right of the political spectrum. The Left may try to obfuscate this reality, attempting to paint the Right as agents of the oppressive state, but in the end the truth always wins. It happened everywhere the Left held the power, and it will happen in America, too.

But the truth needs our help. We need to spread this notion, especially among the young people: Right is cool. Liberty is cool. Independence is cool. If your young heart desires idealism and adventure, sabotage the oppressive leftist establishment! If you want to hang out with free thinkers and non-conformists, join the Tea Party!

Contrary to the old man Marx, not everything happens by historical necessity; there's also the matter of free will. This is where the anti-Obama activist artists come in and seize the moment.

The prospect of the art world rebelling against the leftist establishment frightens the Left more than the Republican Party campaigning ever will. A bunch of hip, younger artists amusing themselves by blasting leftist icons may start a trend that will turn out to be more consequential than all the costly election strategies devised by well-paid GOP consultants in Washington. Because, as Andrew Breitbart frequently said, politics is downstream of culture.

If my instincts are correct, we will be seeing more provocative street art like this. Conservatives will do well to support it.

Oleg Atbashian, a writer and graphic artist from the former USSR, is the author of Shakedown Socialism, of which David Horowitz said, "I hope everyone reads this book." In 1994 he moved to the U.S. with the hope of living in a country ruled by reason and common sense, appreciative of its freedoms and prosperity. To his dismay, he discovered a nation deeply infected by the leftist disease of "progressivism" that was arresting true societal progress. American movies, TV, and news media reminded him of his former occupation as a visual propaganda artist for the Communist Party. Oleg is the creator of a satirical website ThePeoplesCube.com, which Rush Limbaugh described on his show as "a Stalinist version of The Onion." His graphic work frequently appears in the American Thinker.