Warning: mysqli_free_result() expects parameter 1 to be mysqli_result, bool given in /var/www/html/americanthinker/admin/common/functions/func.general.php on line 126
 Barack Hussein Soebarkah: In Two Places at the Same Time? - American Thinker
|

Barack Hussein Soebarkah: In Two Places at the Same Time?

The 44th President of the United States is, of course, Barack Hussein Obama II.

To be sure, only supposed madmen note that the name "Soebarkah" originated in very tight spatiotemporal proximity to the operations of a cult called "Subud" that was founded by a Muslim named Mohammad Subuh -- a cult wherein personal name changes were the order of the day.

That Soebarkah's mother associated with members of the cult, and that, some 45 years later, a leader of the cult (Deliana Loretta Fuddy) would be the first non-medical doctor in the state of Hawaii to run the State's Department of Health (and therefore have custody over Soebarkah's long form birth certificate) is, shall we say, rather odd -- but nothing more than that, except to the most determined and deluded of conspiracy theorists.

Conspiracy theorists might add that cult leader Fuddy, relatively soon after her certification of Soebarkah's origins, apparently perished in a plane crash survived by everyone on board including the cult leader herself -- until the cult leader, post-collision, poetically disengaged a hand and was swallowed by the ocean.

But, this is truly sheer madness -- all of it; there's simply no denying it.

And yet, the depths of the madness inspired by the most transformative of presidents remain unfathomed -- even by the most ardent of conspiracy theorists.

You see, there are certain very queer facts about the nameshifter that not even the most ardent conspiracy theorist will want to deny.

Astoundingly, it would appear that Soebarkah could be in two places at the same time.

Re-acquaint yourselves, if you will, with the Soebarkah version stamped May 3, 1990.  On that date, as reflected by the Illinois Daily Herald, we have Soebarkah in his typical, comfortable, "Barack Obama" uniform.

He's talking, of course, about stopping "racism" at its core and how bored he is with the suburbs, but we also hear:

Obama moved to Southeast Asia at age 2 when his parents divorced and his mother married an Indonesian.  Until the fifth grade, Obama attended Indonesian schools, where most of his friends were the sons of servants, street peddlers, and farmers (emphasis added)

Got that "until the fifth grade" part?

Born in Hawaii, where his parents met in college, Obama was named Barack (blessed in Arabic) after his father. The elder Obama was among a generation of young Africans who came to the United States to study engineering, finance and medicine, skills that could be taken back home to build a new, strong Africa. In Hawaii, he married Obama's mother, a white American from Wichita, Kan.

Two years later, Obama's parents separated and he moved to a small village outside Jakarta, Indonesia, with his mother, an anthropologist. There, he spent his boyhood playing with the sons and daughters of rice farmers and rickshaw drivers, attending an Indonesian-speaking school, where he had little contact with Americans.

Every morning at 5, his mother would wake him to take correspondence classes for fear he would forget his English.

It was in Indonesia, Obama said, where he first became aware of abject poverty and despair...

After six years in Indonesia, Obama was sent back to the United States to live with his maternal grandparents in Hawaii in preparation for college. It was then that he began to correspond with his father, a senior economist for the Kenyan finance ministry who recounted intriguing tales of an African heritage that Obama knew little about (emphases added.)

So, after six years in Indonesia preceded by two Hawaiian years before the separation of BHO I and Stanley Ann Dunham divorce (but click here for an interesting perspective on the BHO I//Dunham "marriage"),  Soebarkah returns to the states to "prepare for college."

OK, let's just leave aside the "prepare for college" at what must have been a very early age nonsense -- or, was it such an early age?

Instead, direct your attention to this October, 2008 text from Hawaii Business:

Now, kids from Hawaii's public schools can also claim ties to the Democratic presidential nominee. I acquired the picture below from Winifred (Wakai) Otaguro, who was in Ms. Sakai's kindergarten class at Noelani Elementary School in 1967. Otaguro's mother, Betty Wakai, had written the names of most of the kids in the class on the back of the picture. Her writing identifies the first little boy in the third row as "Barry Obama." Obama's sister Maya Soetoro-Ng confirms that the boy is Obama, however, the Department of Education has been unable to find his records.

You will note that the Hawaii Business link features a 1967 Noelani Elementary School photo of the kindergartener "Barry Obama" (Soebarkah??) in the third row. 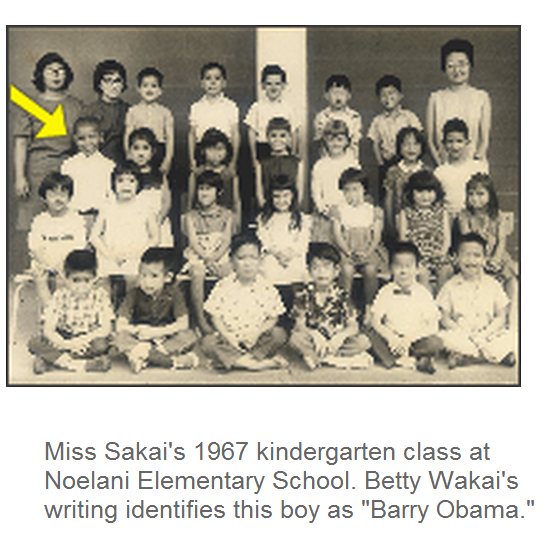 I thought we were told that Soebarkah was in Indonesia at kindergartener age?

Upon reflection, though, there is obviously no problem here.  Soebarkah, by way of a highly classified Subud incantation, perhaps simply folded time and space and was in both locales at once.

Or, was he a kindergartener preparing for college -- genius supreme that he incontrovertibly is?

Of course Soebarkah himself did not fold time and space; of course he is not a genius supreme.

The genuine, non-conspiratorial explanation is much more mundane.

Soebarkah lived in Indonesia, then appeared in Hawaii for a very brief spell, then moved right back to Indonesia, and then back to Hawaii again.

We can confirm this by consulting Department of Education records.

Except we can't, of course, because by mere happenstance the Department of Education "has been unable to find his records."

Perhaps instead we could simply examine the 1965 passport of Stanley Ann Dunham?  Nope; the State Department informs us that Dunham's passport materials were destroyed as a matter of routine.

Just as it frequently happens that the National Student Clearinghouse -- responsible for collegiate education verification -- goes back and forth on a whether a person was enrolled at an institution for one year or two years -- as it did with Soebarkah.

And, literary agents often, out of nowhere, suppose that their US born clients were in fact born in Kenya.

In addition, and just as unquestionably, the passports of presidential candidates with rock solid identities are breached every election cycle.

In view of the foregoing, it should be obvious that everything is cool with Soebarkah's Social Security Number, his Selective Service card, and so on; only racists and those who oppose amnesty think otherwise.

Any conclusions to the contrary obviously amount to nothing more than conspiracy theories -- racist aspersions cast upon a president whose identity is as constant and known as Ronald Reagan's was.

Dr. Jason Kissner is associate professor of criminology at California State University, Fresno.  You can reach him at crimprof2010@hotmail.com.