What is Going On With Jobs?

Everyone agrees that the employment report last Friday was very bad. Unemployment went down to 6.7 percent, but that was because the Household Survey showed that 347,000 people left the labor force in December while only 144,000 found jobs. In a healthy growing economy you are supposed to get the work force increasing faster than the actual employment, as people join the labor force confidently looking for work.

If you look at the data for the five years since President Obama was inaugurated, you can see that we are not just talking about a bad month. It's all bad, from the giddy inauguration to the latest vacation in Hawaii. 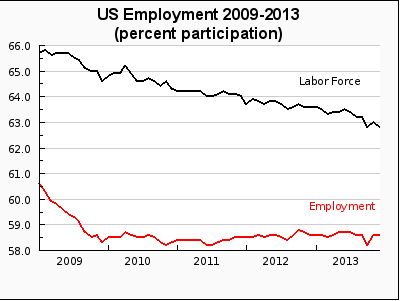 Now we know why people have always worried about witches: the president cast a spell to tell the oceans to stop rising and instead he got the labor force to retreat.

This is surprising to anyone paying attention to the mainstream media. After all, the president has pivoted again and again to jobs. You would think that all those speeches would have made a difference.

Why, if I were a Clinton running for president I'd say it was the "worst economy in the last 50 years."

We all know that the president came into office when everything was Bush's fault. So let's look back a bit, all the way to 1993 and see what's been going on in the medium term since the day that Bill Clinton was inaugurated president. 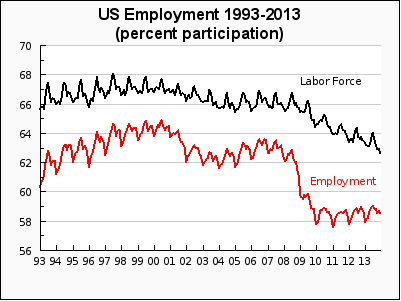 These numbers are not seasonally adjusted, so you get a seasonal sawtooth. But you can see that the labor force and employment were gung-ho in the 1990s, and dipped a bit in the 2000s.

Then came the Crash of 2008 and employment crashed with it. Today we have the Obama economy, with the employment to population ratio stuck at 58.5 percent and a labor force slowly losing heart dipping below 63 percent, down from a high of 68 percent in the late 1990s.

Of course it may be that Americans are doing fine, and the decline in the labor force merely reflects increased scamming as more Americans work off the books while collecting government benefits.

But if you are like me, you want to know more. What is going on with the labor force? Are young people giving up? Older people? What is going on? So I dug a bit deeper into the Bureau of Labor Statistics data (you need Java) and came up with this chart, which divides up the labor force into six age categories. 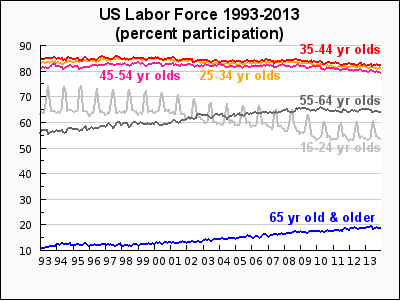 Now this chart is really fascinating. It shows that people in the peak working years are backing off their labor force participation a little and the young 'uns have backed off a lot.

But the really interesting part is the old 'uns, people like me. Work force participation has been going up for older people in the work force, going back to the early 1990s. For people over 65 the participation has nearly doubled, from a little over 10 percent to nearly 20 percent, and it kept right on going through the first four years of Obama's Hope and Change. Imagine!

What is going on with older people? Are we working because we like it? Is it because low interest rates have forced us to work? What is it?

I tell you what I think. I think it is "time for a change."

Christopher Chantrill (mailto:chrischantrill@gmail.com) is a frequent contributor to American Thinker. See his usgovernmentspending.com and also usgovernmentdebt.us. At americanmanifesto.org he is blogging and writing An American Manifesto: Life After Liberalism. Get his Road to the Middle Class.