Warning: mysqli_free_result() expects parameter 1 to be mysqli_result, bool given in /var/www/html/americanthinker/admin/common/functions/func.general.php on line 126
 Warmists Pivot to Climate Adaptation - American Thinker
|

Climate change activists utilize two strategies in their war against global warming: mitigation and adaptation. Despite ongoing efforts, mitigation efforts to cut CO2 emissions are failing. There is little political will in developing countries like China and India to make sacrifices to avert a distant threat that might turn out to be nonexistent. In response, environmentalists are increasingly focusing on adaptation strategies.

Skeptics like Bjorn Lomborg argue that adaptation is significantly more cost-effective than mitigation. Mitigation is governed by the precautionary principle: act now, just in case something in the future might be harmful. With adaptation -- adapting to climate as we go along -- there is no imperative for immediate action. If it turns out that the Earth not warming catastrophically, we will save a lot of money, and if it seems clear that, for example, sea levels are rising, then we spend money in 2030 or 2040 to increase the height of seawalls and take other measures to protect our coastal cities, at a time when our descendants will be wealthier and their technology far superior to ours.

Climate alarmists, however, are outraged by the idea of postponing action, which they portray as burdening our children and grandchildren with our unsolved problems. Money spent now! is evidence of superior moral character. (The "policy initiative" most characteristic of Barack Obama's presidency is labeled "We Can't Wait!") Alarmists therefore apply the precautionary principle to adaptation, undermining its cost advantage.

A typical example from my home state: the September 2011 report of the Massachusetts Climate Change Adaptation Committee concludes, "The time to address climate change is now." The Boston Globe reported last week:

Governor Deval Patrick will commit more than $50 million on Tuesday to help Massachusetts communities and utilities prepare for and protect themselves from the increasing number of destructive storms and rising sea levels blamed on climate change.

Most of the money, about $40 million, will be distributed as grants to help cities and towns install backup power systems using clean technologies, such as advanced batteries that store energy from solar panels.An additional $10 million will pay for seawalls and similar improvements along the coast, where storm surges and rising sea levels have flooded communities, severely eroded beaches, and caused extensive property damage.

...these funds... are partially financed by payments that retail electricity suppliers must make if they fail to procure enough power from renewable sources such as wind and solar.

Climate change has gained increasing urgency in recent years following a series of destructive storms. Patrick administration officials noted in particular Hurricane Sandy in 2012, Tropical Storm Irene, the October snowstorm in 2011, and powerful winter storms, such as the nor'easter this month.

Despite the drumbeat of news stories claiming that every storm is evidence of global warming, demanding immediate action, global storm activity is at historic lows, and sea level rises are miniscule. And it's not like Boston has never experienced a nor'easter.

That $40 million for solar batteries (the price of 40,000 gasoline generators) smells like a payoff to the solar lobby.

As for the $10 million for seawall improvement, it might be money well spent -- an actual shovel-ready job. Climate adaptation is complicated because commonsense measures to protect ourselves from weather-related disasters do exist. My parents tell stories of Weybosset Street, Providence, under ten feet of water during the 1938 hurricane. In the 1960s, the 3,000-foot long, 25-foot high Fox Point Hurricane Barrier was constructed at a cost of $16 million. It is estimated that over the years the project has prevented several hundred millions of dollars of damage to Providence.

After Hurricane Sandy, the New York Times reports, "several engineers said they were shocked that New York City had not done far more to safeguard its tunnels." This is an existing problem that should have been addressed already, regardless of climate change.

In addition to the state adaptation study, the city of Cambridge has commissioned its own $490,000 study to produce "a climate change vulnerability assessment, which will run until mid-2014 and serve as the foundation for a climate change preparedness plan." 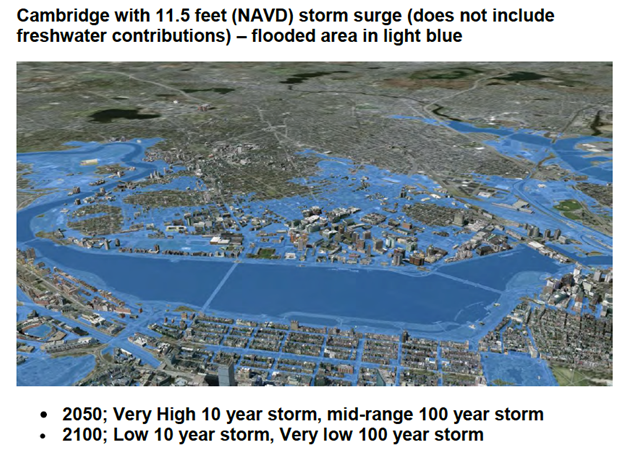 Cambridge is protected from storm surges by the Charles River Dam, first constructed in the early 1900s and rebuilt in 1978. Engineers predict that at present the dam will protect Cambridge and Back Bay from a 100-year event. According to hydrologist Paul Kirshen:

[T]oday the maximum height of the sea would reach within 8 inches of the top of the [Charles River] dam.

Any increase in sea level increases the likelihood that a surge will overtop the dam. Rises in sea level between 1 to 1.6 feet by 2050 and 1.6 to 4.5 feet by 2100 fall in the middle of the range of the recent projections. Therefore, even estimates of sea-level change in the lower range of today's models predict a rise sufficient to make the surge from a 100-year event overtop the dam.

Mr. Kirshen's numbers are higher than the IPCC's figures, which reported in 2007: "Global average sea level rose at an average rate of 1.8 mm per year over 1961 to 2003. The rate was faster over 1993 to 2003: about 3.1 mm per year." Steve Goreham writes in the Washington Times: "This translates to a 100-year rise of only 7 inches and 12 inches, far below the dire predictions of the climate alarmists."

Mr. Kirshen believes that the rate of sea level rise will increase and so he doesn't accept a linear extension of past data (100 years times 3 mm = 12 inches).To his credit, his predictions, although high, are in the right order of magnitude, unlike the wild claims made by Al Gore and his acolytes. A recent National Geographic cover, for example, pictured water halfway up the Statue of Liberty. 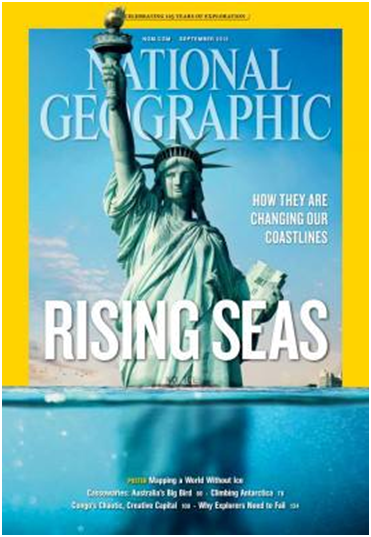 According to calculations made by Anthony Watts, this represents a rise of 214 feet above mean sea level.

One can argue that global sea levels cannot be measured to a precision of millimeters, or that the predictions about catastrophic sea level rise are fallacious. Nevertheless, let's concede that a 1 to 1.6 foot rise by 2050 is possible. At that rate, the water will be lapping at the top of the Charles River Dam in 2029 (in a 100-year storm). Do you think we can manage to weld a foot or two to the dam gates sometime in the next 15 years?

It's not that hard, assuming we're not dealing with 214 feet of water. Humans have been building seawalls for millennia.

Adapting to climate change, if we need to and when we need to, is a sensible approach, and a moral one. Despite the self-righteousness of climate zealots, it's not especially noble to borrow millions of dollars topay climate cronies for solar batteries, climate change preparation plans, fear-mongering disease vector studies and municipal-level climate models.When future generations have to pay off the debts for this antiquated and wasteful climate "action," they won't thank us.