The Wolf of Wall Street

I went to see Wolf with a friend who has zero investments. As we watched the film, which for all its 3-hour length flew by in a compulsively sickening but sustained high-wire act of what's next?, he commented that he owns no securities. Now, watching this debauchery, he would never invest with this species of human infection.

When I spoke with my account manager after the film, I admit that even I -- much more sophisticated than my friend, if far less knowledgeable than almost anyone in finance -- also spoke with some shaded caution, as the film reminded me of the storied excesses that were tamped down in the 80s, 90s and aughts.

The initial article in Forbes that depicted Jordan Belfort as an ethics-challenged trader-wolf, Scorsese or the Belfort biographer would have us believe, initiated a tsunami of voracious young moneylusters who washed up in waves, excited by what they had read. But our reaction through the 3 hours, never less than interested, was yet never more than soured observation. Monitoring my reactions as the film unspooled, I was troubled, often found myself grimacing, disbelieving and disgusted. The man gave nothing back, and treated those who behaved less avariciously than he with oblivious cruelty. The single person who benefited from his early largesse, we are told in the film, is a female stockbroker who was given $25,000 at the start of her company tenure. We don't know if that is even true. What is true, but got not one second of screen-time, were the pigeons, the wealthy and mostly not-so-wealthy who lost their savings, their IRAs, or their families in the wholesale losses engendered by the unscrupulous stocktraders of Stratton Oakmont. 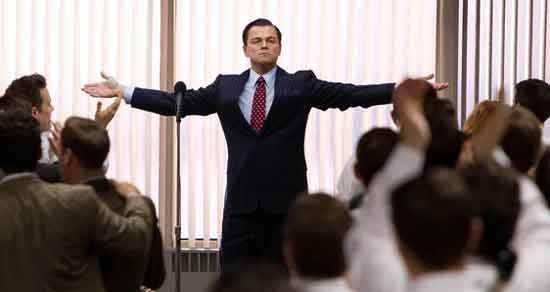 Earlier films in the same genre -- Wall Street and sequel, Boiler Room, Glengarry Glen Ross, even the current American Hustle -- spare a reel or two for the sorry shards of those impacted by all the coked-out fleecing. Though Belfort has by now served several years for his fraud and illegalities, he makes five-figures for motivational talks. Few of his numerous victims have yet gotten a dollar-for-dollar restitution. We see the Whee! rollercoaster, never the people vomiting outside the ticket booth. Belfort's sleazy partner, played by Jonah Hill, almost chokes to death from a failure of coordination brought on by heedless blow inebriation -- but in real life, there must have been more casualties, directly, from that rampaging copulative and pharmacopic careening.

The core group of clueless doofuses who began the company with DiCaprio/Belfort discuss what they can and cannot do when they debate hiring dwarves to toss at a Velcro money wheel. The thought that such a subcivil act is abhorrent on the face of it never enters their mind. They are concerned only with the lawyers' codicils on what is actionable insofar as law and crossing the line goes.

The drug-taking is endless, such that one doubts they would not have suffered cardiac arrests after even a few months of such pharmaceutical free-basing. Similarly, the women, prostitutes and for-hire, blur into a montage of backsides and breasts. The coarseness of everyone in major focus, and their vulgarity, is worse than that seen in the more resonant film, American Hustle, where a few people could claim righteousness or the movie poked fun equally at all societal tiers, frauds and famed, lawyers and lawmen, layers and layettes. In Wolf, only the FBI seems above greed and compromise for lucre, and even that's dicey for most of the film. Though Belfort clearly adores his second wife, he sees no problem whatsoever in orgies on planes, the office loo, and anywhere else with anyone handy, even grading their whores in three levels for the audience's benefit. Oh, yes, he breaks the fourth wall frequently, in the manner of another Scorsese exemplar, Casino, to speak directly to us.

Scorsese's protagonists' motto, seen in this character as well as his other top-ten draws in Goodfellas, according to most of his oeuvre, is Want. Take. Simple. They snort enough nose-candy to mantle the Matterhorn an inch deep.

This was not prehistory: Didn't the female associates in pump-and-dump Stratton Oakmont feel devalued and denigrated by the disrespect and freak-show testosteronic hedony of their male colleagues? Didn't anyone get socially transmitted diseases? Sexual harassment was well-known at the time: Did no one ever sue in this rank tank? Even Belfort's father, played by Rob Reiner as a shreier [screamer] against obscenely high T-and-E ("T-and-A" in the story) receipts, comes across as wistful that he came along a generation too soon to enjoy the same... avocations his son is enjoying. More amorality.

There was no electric effervescence in the theatre, as you get from many movies that goose the public sensibility. Everyone sat in his or her private funk, watching the limitless crashing of our tradition-taught ethics. There was no laughter, not even any humor. There was silence and glumness at the spectacle of such dishonor. Worse to tell, this occurred in the late 80s and early 90s. But we are scarcely shed of this back-room bacchanalia even today. Much of what Scorsese shows could easily be updated with Madoff and his collective successors.

Do the corrupt goings-on and relentless abuse of women and bodily functions entertain, or do they instruct the young and impressionable that, say what you will, such unregulated frat-party-room excess pays off in the end. Babes. Pills. Candling backsides. Casual betrayals. Incestuous aunts. Exotic homes, cars, yachts. But also: Broken homes. Divorces. Swindled masses. Ruined lives. Children traumatized.

Does such a shocking glam-flam-stank-you,-ma'am make viewers less inclined to try to pull off such a litany of larcenous trespass, or does it instead encourage hot-breathed replication at any cost? Is Wolf a howl of indictment, or an ode to the overdone olfactory?