Obama Has Made it Impossible for Israel to Strike Iran

I called a hardheaded realist, a Harvard trained PhD who has been watching the Middle East professionally for decades, to ask him about Obama's Iran deal.  This is what he told me.

They want a bomb and they will not be denied unless somebody stops them.  Obama does not want to stop them.  He does not want a friendly regime in Iran.  He wants Iran as a counterforce to America and Israel.  Obama is not a Muslim, but he is a radical.  He sees the U.S. and Israel as imperialistic and oppressive.  He doesn't like the U.S. military.  He'd cut it to nothing if he could get away with it.

We'll have to pull our troops and our aircraft carriers out of the Persian Gulf.  We'll lose our ability to protect Middle Eastern oil.  The Gulf Arabs will have to cooperate with Iran.  So will Europe; they depend on that oil.

The Iranians want the ascendance of Shia Islam.  People don't remember, but when Ayatollah Khomeini took over, he sent Revolutionary Guards to Saudi Arabia and they seized Mecca.  French paratroopers had to go in secretly and get them out.  The Saudis couldn't do it themselves.

The Iranians want to take over Mecca and Medina.  They want to take over the Arab world.  With their nuclear weapons they will pressure Israel.  They don't need to bomb them.  They will test a nuclear bomb, they will send in missiles, they will issue threats, they will strangle them economically.  Israel's high tech people will leave.  They can do start-ups in Silicon Valley just as easily as in Israel; the weather is just as nice.  Investments in Israel will dry up.

The deal is indeed terrible. Obama has been changing the rules of the game -- he went from Iran not having the ability to make a bomb, which had been our policy, to Iran not actually making a complete bomb.

Once you've mastered enrichment, and Iran has, creating enough highly enriched uranium is just a choice; there are no technical hurdles left.  They have thousands of centrifuges that can enrich uranium in a few months, starting from zero.  Whether they have stocks on hand enriched to 5% or 20% is totally irrelevant.

Iran will have an unarmed bomb on the shelf ready to go. Loading the bomb takes a short time -- who will know when they do that?  Bombs are not that big, especially ones meant to be loaded on missiles. So who will even know where it is?

The Threat to America 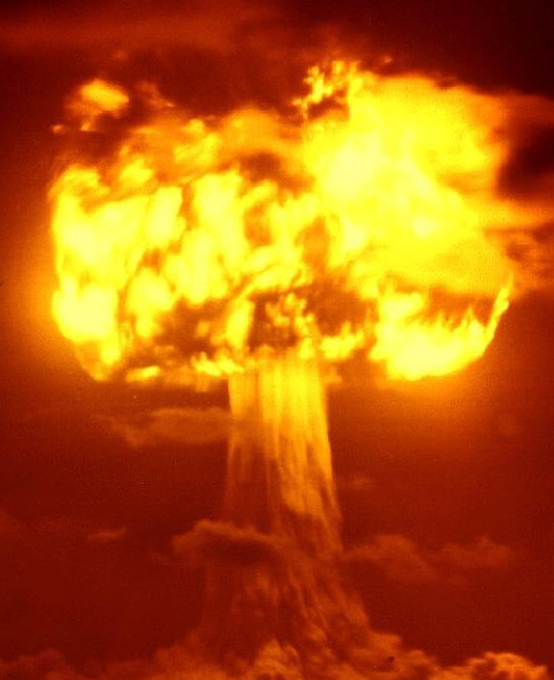 Forget a dirty bomb against America.  What about a real bomb?  A ten thousand pound bomb could be on a cargo ship or a barge heading into an American port.  There are many points of failure in trying to stop them.  We do radiation testing on cargo ships, as much as we can.  Iranians are smart, they have good engineers and scientists, they will take counter-measures.  We can succeed 9 out of ten times.  What about the tenth time?  And how do we know it's from Iran?  It has no signature.  It could be from Pakistan.  Iran absolutely is a threat to the U.S.

The idea that the mullahs have not made the decision to make a bomb, and if they do so we will know, is absurd. Consider all the other instances in which our intelligence was caught flat footed -- 9/11, the second Indian bomb, Pakistan, North Korea, the fall of the Soviet Union.

They could well have a bomb ready to go right now -- it's not that hard. They probably don't have the highly enriched uranium -- probably, but not definitely.

This deal makes it essentially impossible for Israel to strike -- not least because the U.S. has Israel under a microscope, by satellite and other technical means, and also with spies in the government and the IDF (Israeli Defense Force). At the first hint that a mission is imminent, the White House will leak it to the Washington Post, the New York Times, destroying operational security.  Just as the U.S. leaked about Israel's strikes into Syria.

If despite this Israel tries to strike, they are the ones who will be viewed as pariahs and warmongers.  They could face economic sanctions.  Obviously Bibi didn't trust Obama, but Obama managed to betray him and Israel anyhow.

It's the U.S. that has the bunker buster bombs capable of taking out Iran's hardened nuclear sites, not Israel.  Iran learned from Israel bombing Osirak.  They distributed their nuclear program and put it in hardened sites.  Israel doesn't have heavy bombers.  They can't afford them; they don't have the men or the money.  They rely on air superiority, which is what they've needed - F-15 and F-16s, multi-purpose aircraft.

Israeli military cooperation with the Saudis could be a game changer, because it's closer to the target and doesn't require refueling.  But the Saudis don't have the necessary integrated air defenses.  Is Israel going to bring in Iron Dome to protect the Saudi airfields?  Iron Dome is designed for lighter, Hezb'allah missiles, and as soon as you start installing it, your secrecy is gone.  Bombing Iran is not a one shot deal.  Without the bunker busters, Israel is going to have to hit the same spot over and over.  That is not easy.  It will take 3-4 days.  You bomb, evaluate the hits, bomb again in the same spot.

Bombing will only delay Iran a couple of years.  Is it worth it?

The bottom line is that diplomacy absolutely can't stop the Iranian nuclear project, including nuclear weapons.  Diplomacy can delay the program, especially if combined with the threat of force. After we invaded Iraq, the Iranians were very scared, so they halted the project for a year. When they became convinced that we would not attack them they restarted the project and accelerated it.

The only real answer is regime change. Obama doesn't want regime change. Remember, when the protesters were in the streets of Cairo, we forced our ally Mubarak to resign, with brutal public and private pressure. But when the protesters were in the streets of Tehran, and the regime's thugs were attacking and murdering them, Obama did nothing. He could have used the occasion to tighten sanctions even more, and using the pretext of human rights he could have had European public opinion on his side.

Obama wants the Iranian regime to survive, he wants to negotiate with it, and he wants to ally with it. What a coup that would be for Mr. Obama -- he would get a second Nobel.

He is like the community organizer who goes into a rough neighborhood and wants to reach an agreement with the strongest street gang, so they will let him organize in peace. That's what Obama is doing, by bending to the Iranian demands and negotiating with Hezb'allah.  Of course, this is idiotic - Hezb'allah is just a puppet of the Iranians, and only a fool would negotiate with a puppet.

Is regime change possible?  The CIA could do it.  We've done it before.  You pay people to create labor unrest, strikes.  The Iranian regime is tottering.  It could be brought down.  The mullahs do not trust the army.  They're afraid their conscript soldiers won't fire on crowds, so they rely on Revolutionary Guards, highly paid, and on organized street thugs called the Basiji.  But, you get one general to revolt and kill the political officers, make a public statement that "we must not harm the people."  The Iranian people are not violent, they are not prone to riot, but a funeral leads to a demonstration, to more funerals and the protest grows.  Only 55% of Iran is Persian, the rest are minorities, Arabs, Azerbaijanis -- you create problems.  A truck of Iranian soldiers is blown up in the Azerbaijani region.  It's not hard to do.

Iran could have a regime friendly to us.  The people have experienced the mullahs; they are friendly to America, and even Israel.  Under the Shah, Iran was friendly with Israel.

Obama doesn't want Iran to become an ally, or he would have acted during the Arab spring to topple the regime.  They were vulnerable.  The people were chanting, O ba ma, O ba ma, which means, "you are with us," in Farsi.  But Obama wasn't with them.

Obama doesn't want America to have allies.  He undermines them.  Look what he did to Poland, our best ally in Eastern Europe.  Poland went out on a limb for us on NATO missiles and Obama cut it off.  He undermined Israel and the Saudis.

Anyhow, that's how I see it. If Israel had a realistic military option, they should have pulled the trigger before Obama's second term (of course, he ordered them to maintain quiet until the election was over). Don't know for sure what they were thinking. Maybe they didn't have a real option but used the threat to try to tighten sanctions and get the US to act.

It's a very bad situation -- another great mess created by our glorious leader.  We're going to have a nuclear Iran.