My article "Failing to Build Keystone Pipeline is Criminal Negligence" appeared in the American Thinker on October 22nd in an effort to bring public pressure on the U.S. National Transportation Safety Board and the Obama Administration to "formally declare" moving huge amounts of crude oil to distant refineries by mile long "oil trains" a safety hazard and approve building pipelines, including the Keystone XL. The report detailed a rising rate of horrific train car derailments that caused many deaths, property damage and environmental degradation. Despite another oil train derailment and fire the following month in Alabama, the NTSB and the administration continued to remain silent on the issue. But now that a witness caught on video multiple explosions and fireballs from a December 30th oil train disaster near Fargo, North Dakota, Congress is going to come under increasing public pressure to approve the Keystone XL Pipeline.

The fracking boom in North Dakota's Bakken Field has driven crude oil production from 400 wells generating about 160,000 barrels a day (bpd) in 2007 to the current 6,447 wells producing a million bpd. To move 830,000 bpd of that production from a new terminal in Baker, Montana to refineries in Texas, TransCanada Corporation proposed a $7 billion "XL" extension to their Keystone Pipeline system. The annual economic benefit from the Keystone XL Pipeline extension was estimated at $9.1 billion.

Railroads have been making fortunes carrying 75% of Bakken oil and charging $17 a barrel to move crude oil to Texas refineries, versus the estimated $10 a barrel to ship by the Keystone XL Pipeline. Most analysts were baffled in 2009 when Warren Buffet's Berkshire 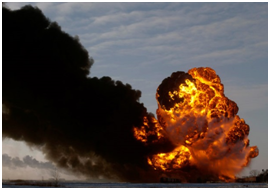 Hathaway Corporation made its biggest ever acquisition of the Burlington Northern Railway (BNI). The railroad was making good profits carrying the majority of Bakken oil, but that business was expected to shrink by 2012 when the Keystone XL Pipeline was scheduled to come on line. But since the Buffet purchase, the volume of Bakken oil shipped by train has increased by 2,000%. BNI's profits have grown by 30% a year to a record $2.37 billion in 2013. Goldman Sachs recently estimated the continuing delays in building the XL pipeline could raise from 10 oil trains of up to 100 tankers that left the Bakken everyday in 2013 could vault to 15 a day in 2014.

Railroads are designed to transport general freight to where people are, whereas pipelines carry toxic products to refineries that are specifically located at safe distances away from populated areas. Some media stories have repeated public relations statements from the oil industry that they prefer a mix of pipeline and rail transport of crude oil.But only good fortune prevented the Fargo's "pipeline on wheels" accident from killing hundreds in a metropolitan area and costing tens of millions in damages.

Railroads continue to claim an average of only thirteen spills per year over the last ten years, but 65% of oil shipments by rail were in the last two years. An average of one oil train a month derailed in 2013. The worst accident was the July 6th derailment and explosion of an oil train carrying Bakken crude oil through the center of the town of Lac-Megantic, Quebec, where 47 people were incinerated and 30 buildings were destroyed. But there were also numerous environmental disasters this year from derailments that spilled hundreds of thousands of gallons of crude oil.

Although some railroads, like BNI, appear to have deep pockets to pay claims from accidents, the Montreal, Maine & Atlantic Railway (MM&A) the operator of the oil train that exploded in Lac-Megantic, has already filed for bankruptcy. The cleanup costs alone for property damage will run over $100 million, but the potential costs for the Lac-Megantic personal injury lawsuits are estimated to run up to $1 billion.

MM&A carried a multi-million dollar liability insurance policy with XL Group PLC before the crash. But the insurer is seeking to deny all liability based on demonstrable negligence by the railroad operator. Without insurance, MM&A's assets according to documents filed in Maine U.S. District Bankruptcy Court, are less than $100 million. Given the number of overloaded oil train derailments this year, it doesn't seem far-fetched that XL Group will be able to prove that shipping oil trains is clearly negligent.

America in 1970 had 315 refineries sprinkled across the nation, and the U.S. imported just 72 million gallons of crude oil per day. But by 2006, environmental restrictions had shrunk America's number of refineries to 105 and the nation was importing 587 million gallons per day. In percentage terms of U.S. supply, imports grew from 20% to 65%. Hydraulic fracking in the U.S. has increased domestic production so much that by the end of 2014 imports will have been cut back to just 35% of demand. The fracking boom is also estimated to have created 2 million high-paying jobs.

I continue to believe that the Obama Administration and Congress knew that risks from shipping crude oil by mile-long trains was morally just as negligent as the train operators involved in the horrific accidents, because it is indisputable that pipelines are the safest and most cost-effective transport for crude oil. Warren Buffett and self-interested railroads continue to benefit financially from legislative and regulatory delays in building of the Keystone XL Pipeline.

But the video of the Fargo oil train explosions and fireballs may represent a tipping point. As the 2014 Congressional campaigns get under way, many senators and congressmen are going to have a hard time defending the safety of oil trains. The Keystone XL Pipeline has always been a great project for generating American jobs and cutting our dependence on foreign oil, but it now is a safety priority.