James Clapper and The Lies of Intelligence

If you met James Clapper, you would probably like him.  In spite of his post-military beard and perennial scowl, he is actually a congenial chap.  When he speaks to you, he has that rare ability to make you feel that you might be the most important person in the room.  Alas, every administration needs a scapegoat or two and it appears that Jim Clapper will do for the Obama crew.

Remember the infamous Benghazi fiasco where Hillary and Susan Rice tried to stuff that dirty laundry in the Intelligence hamper.   After all, it's not like Clapper will be running for high office any time soon.  He's dispensable and he knows it. 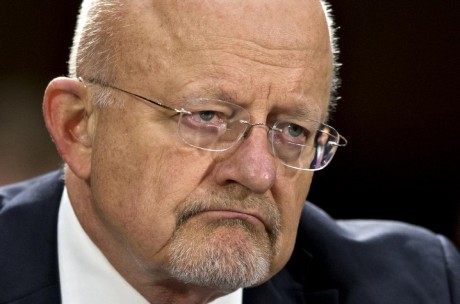 Still, General Clapper is not the usual beltway courtier.  He began his career as a Marine grunt, left the service to get a degree, and came back to the military as an Air Force officer.  He graduated from that service as a three star.  And unlike Henry Kissinger or John Brennan, he didn't make his political bones as a revolving-door academic or a politically correct confidant.  Clapper's contributions to Intelligence collection and real-time military targeting are significant by any measure.

PRISM may be a bridge too far, but technicians are hardly the folks to answer the "should we" question.  Intelligence is more about answers, not necessarily ethics.  National security policy is not made at church suppers.

Prevarication is not an exception either.   It's the way the game is played in the nation's capital.  And the name of the game is winning; win on the issues and then silence critics any way you can.

The question isn't dishonesty per se.  The real challenge is to spin the truth like a mirror ball.  A 'wilderness of mirrors,' indeed!

Maybe there's a moral problem there, but as Hillary tells us: "What difference, at this point, does it make?" Mrs. Clinton got a win out of the Benghazi fiction, and she may eventually get that Oval Office brass ring too.  American voters love an artful dodger.  Bill Clinton's rehabilitation speaks to the ephemeral nature of political reputation in politics.

With intelligence operatives, deception is part of your bag of tricks.  Nearly all intelligence operations are illegal or immoral somewhere, at some level.  Stuxnet and PRISM are examples The real coup of Wikileaks is that Julian Assange now has a better public image than James Clapper.

All political lying is predicated on passive voters and inert taxpayers; constituents who might prefer to hear a pretty lie than see an ugly truth.

And on the the analytical side of the Intelligence megamall, memos, reports, and estimates are baked like raspberry tarts too.

Susan Rice's Benghazi "talking points" take a bow here.  Or we could recall CIA's estimate on those "weapons of mass destruction" in Iraq.  Even the phrase "WMD" was cribbed from the Russians.

Or better still, how about the George Tenant/ Colin Powell burlesque at the UN in the run-up to the second Iraq adventure? And now the Jane Fonda wing of the Democratic Party, chaired by John Kerry, is negotiating with Islamic mullahs over nuclear weapons proliferation.  Who thinks the Israelis and the Saudis are getting the truth from Foggy Bottom about secret talks with the ayatollahs?   To the American Left, Joseph P.  Kennedy Sr.  is still an inspiration.

The truths about Islamic imperialism, religious fascism, or the prospects for peace today are not lost on civilian analysts like Caroline Glick or politicians like Bibi Netanyahu.  Sober Jews cannot afford the luxury of national security illusions.  And recall that even Christopher Hitchens, before he died, concluded that "Islamofascism" was an epithet that Muslim adherents had earned.  Such candor is unlikely to be featured in any official US Intelligence report in the near future.

The disingenuous cater to the culture that they represent.  Recall the fate of Pat Moynihan when he tried to be candid about the dangers of cultural and generational dependency? The average plodder doesn't necessarily want truth so much as comfort.  Spies and politicians temporize because the truth doesn't care whose feelings get hurt.  And sailors who rock the boat don't get to be admirals.  Most of us would rather feel good than deal with the pain of truth.

Democracy itself is more than a bit of a fib nowadays too.  Say what you will about government "of the people, by the people, and for the people."  Civic truth is something quite different.  Affairs of state are managed by an elite group of professional politicians, most of whom flaunt tenure.  And American population centers are dominated by a single party.  That's where the votes are, according to another general, Colin Powell.  Those who worry about dishonesty might want to remember that, in modern democracy, fabulists are elected -- and then more are appointed.

All rungs on the government career ladder have different mendacity micro-climates.  And there is some evidence that James Clapper was once a truth seeker.  While at Air Force HQ he cashiered the Soviet Awareness Program while the Cold War was still warm.  While at the Defense Intelligence Agency, he attempted to reform the analytical side of the house too, which was a little like mucking out a mushroom cellar.  Civilian push-back ended the DIA project.  Clapper knows who goes under the bus when reform threatens unionized apparatchiks.

He also knows that threat analysis is still the kink in the Intelligence chain.  Alas, the general's forte is collection and technology.  Clapper is the eminence grise behind modern geo-spatial warfare.  Still, as Director of National Intelligence (DNI) there is no evidence that Clapper tried to fix Intelligence analysis or replace the Soviet Awareness Program with a comparable Islamism awareness project.

Withal, somewhere between DIA and DNI, Jim Clapper misplaced his priorities.   The Intelligence Community doesn't necessarily have to lie about the threat: ignoring the threat has the same effect.

Indeed, say "Islam" in any negative context inside the Beltway, and kiss your azimuth goodbye.  Within US Intelligence, the Pentagon, and subordinate contractors, a mendacity mandate constrains analysis or instruction on all things Islamic.  Thomas Aquinas couldn't get a job at CIA or RAND Corporation today.  Intelligence doesn't speak truth to power; so much as it powders analysis just enough to look like truth.

A right lie at the right moment is grounds for advancement.  Take Susan Rice's promotion for the Benghazi spin.  As National Security Advisor,  Ms.  Rice takes the art of political rhetoric to another level.  In a 60 Minutes puff piece, she claimed the lack of a terrorist attack since 9/11 is evidence that Obama national security policy is working.  In effect, claiming that victory is that which doesn't happen.   Conveniently, she forgot to mention those Boston bombs.

Is the "least untruthful statement" a lie? Perhaps! Is characterizing terrorists and Islamists as "nefarious characters" a half truth? Maybe! General Clapper's phrasing, like Ms.  Rice's, is a study in disingenuous caution.

Back in the day when the bad guys were Nazis or Communists, a threat was called by its given name.  Not so much with Islam fascism - and not so much with John Brennan and Hilary Clinton looking over your shoulder.  Check six, Jim!

National security policy today is a little like public broadcasting, often pandering; but, just enough creativity to keep poseurs afloat.  A recent biopic produced by PBS illustrates the phenomenon.  When they got to the part of Mohammed's life where he slaughters the Jews of Medina, the narrator claims that the prophet was a "man of his times." Was Osama bin Laden a man of his times too? Maybe we could do worse than think of Obama, Brennan, and Clapper as we do Mohammed - men of their times.

G.  Murphy Donovan writes about the politics of national security.  The author was General Clapper's Director of Research and Russian (nee Soviet) Studies when Clapper was the chief of USAF Intelligence.