When Fargo is 25 below zero, Baton Rouge 24 above, and nearly the entire nation is in the grip of a record-breaking frigid spell, one's thoughts naturally turn to global warming -- or, rather, make that climate change.

The former term -- "global warming" -- as it turned out, was too specific; to believe that global warming was a real threat required...well, that global warming actually occur.  That did not happen, as the data have proven, and for once Al Gore was right: truth can be so inconvenient, because the fact that the globe failed to heat up as advertised not only swelled the ranks of doubters, but also tarnished the global warming brand.  A new label was needed.

Some people claim that the phrase "climate change" better expresses the complexity of what is happening weather-wise.

But others among us believe that the purpose of replacing the old, discredited label was to keep the climate crisis pot boiling and bubbling, in order to maintain the flow of funds pouring into the coffers of environmental groups, politicians, academics, and businesses dependent on a zeitgeist of climate crisis.

And some of us believe that even more nefarious actors are at work, perpetuating the empowerment of that perfect storm of interests on the left that seek to overturn the traditional order and impose their visions of utopian conformity, via regulatory salvation from certain death by CO2.  Any propagandist worth his salt will tell you: if the old narrative fails, create a new one. 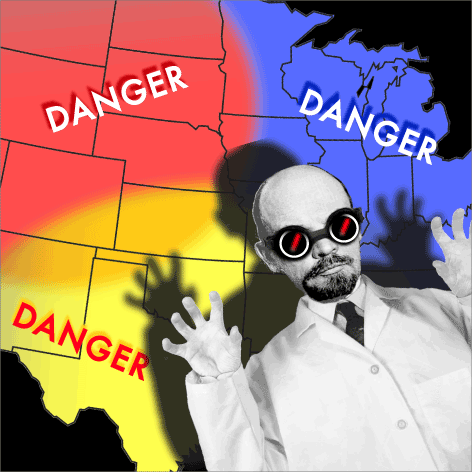 So, as embarrassing as it must have been to recognize the need to do it, for true believers, dependents, and power-brokers alike, it made sense to ditch global warming and adopt climate change as the new mantra of apocalypse.  For us skeptics, this lifting of the schoolmarm's skirt merely revealed what we'd always known to be true, and the reason for the switch was obvious.

Do you remember, back when the IPCC experts all called it global warming, how a withering heat wave in July would set the talking heads on TV to jabbering?  The claim may have been bogus, but the label made sense: global warming = hot.  Then frost would bite us in January, and that, too, was hailed as evidence of global warming.

But even the uninformed and gullible could sense the mismatch: global warming = cold?  Of course, the experts would conveniently forget they'd ever said anything about July's weather and, instead, would now tut-tut, "Well, global warming is a long-term trend" -- with the long-term result that ever more hoots and howls began rising from the herd.

When you're trying to Save the Planet, an increase in the public mockery quotient is bad for business.  Add to that a growing coterie of heretical scientists -- global warming deniers all -- stirring things up.  And as if that weren't bad enough, the data simply wasn't cooperating, either, as it became increasingly evident that the global temperature, rather than accelerating in high gear toward the boiling point, had really just been stuck in neutral for years.  Something had to be done.  Hence, like Kansas weather changing in a minute from cloudy to sunny, global warming suddenly became climate change.

What a brilliant stroke that was!  If there's one constant in the history of Earth, it is climate fluctuation.  A similar propensity for fluctuation exists within the politically active climate crowd in regard to terminology, as surely as Orwell invented Newspeak.  So now, with climate fluctuation -- I mean, climate change -- as a red flag, anything the climate does this decade that it didn't do ten years ago can set the alarm bells ringing.

Is it colder than it was?  That's climate change.  Is it hotter than it was?  That's climate change, too.  (Duh.)  And you can bet your hockey stick that when our climate continues to consistently behave inconsistently, it is mankind's fault.  Or, to be more specific, it's the fault of greedy corporations, but also it's our fault in general for being addicted to fossil fuels, just as we were previously addicted to firewood.

So the science is settled -- at least insofar as nomenclature is concerned: it's called climate change, even though the threat is still acknowledged by the cognoscenti to be global warming -- specifically,  man-made global warming, brought to your world, and that of your children's children's children, courtesy of modern, capitalist, fossil-fuel-powered civilization.

Ask Al Gore, whose company made over $200 million in profit with a carbon-trading scheme.

Just ask any academic who receives grant money to study the dangers of climate change, any CEO whose company's revenue depends on creating solutions to avert climate catastrophe, any environmentalist whose organization gets more donations with each doomsday headline, or any politician who counts any of the above as constituents.

They'll all tell you that climate change is a real threat, we're the culprits, and they've got the solutions, as surely as the wind blows and the switchgrass grows.  You can trust them.  After all, they're just good people with good hearts whose only goal is to Save the Planet.

Robert Babcock writes from Lawrence, Kansas, where he ventures now and then to wrestle a few words into pleasant coherence.  He recently began blogging as Michelle's Pithy Tipper, and his e-mail address is 9megaton@gmail.com.   Illustration by the author.