Headlines that blame a "gun culture" for the high rate of firearm- related homicides in the United States are not too difficult to locate (e.g., here, here, and here). The need to eliminate this "gun culture" is then used as justification for restriction of 2nd Amendment rights. What goes unmentioned about the so-called "gun culture" is its pervasiveness, or lack thereof, throughout our society as a whole. Even a casual reader of local news headlines should not be shocked to learn that firearm-related homicides are more prevalent in some neighborhoods than others. However, what may be shocking is the near exclusivity of firearm-related homicides to a small subset of neighborhoods; neighborhoods that vote predominately for Democrat candidates.

Slate.com has published a compilation of firearm-related deaths since the Newtown mass shooting. This list is provided with the disclaimer that it is unofficial and incomplete. However, the firearm related homicide rates derived from this list were found to be close enough to more officially reported (and less detailed) data to provide sufficient confidence in the resulting findings. The location of each firearm-related homicide (police shootings, suicides, self-defense shootings, and accidents that did not result in criminal charges were omitted) was mapped to a voter precinct and that precinct's 2012 presidential election results were used to ascertain the political leanings of the homicide location.

The United States has an estimated firearm-related homicide rate of about 3.6 per 100,000 people. This rate is in the top quarter of all countries; below third-world countries like Honduras (68 per 100,000), El Salvador (40), and Mexico (10); and above most developed countries like Switzerland (0.8), Canada (0.5), and Finland (0.2).Three states with diverse voting characteristics and firearm homicide rates (Virginia, Minnesota, and Louisiana) were investigated as a representative subset of the United States. The characteristics of these three states are summarized in Table 1.

Previous results have shown that precinct-by-precinct comparisons provide the ability to reveal correlations that are masked when using larger state-by-state comparisons. Thus, the results from the 2012 presidential election were extracted for each precinct in the three states studied herein. The percentage of the vote President Obama received in each precinct was plotted as a function of the percentage of the population in precincts with a higher percentage of votes for President Obama, as shown in Figure 1. This figure indicates that 31% of the Louisiana population lived in precincts that gave President Obama more than 50% of the vote. The percentage for Virginia and Minnesota was 47% and 52%, respectively. 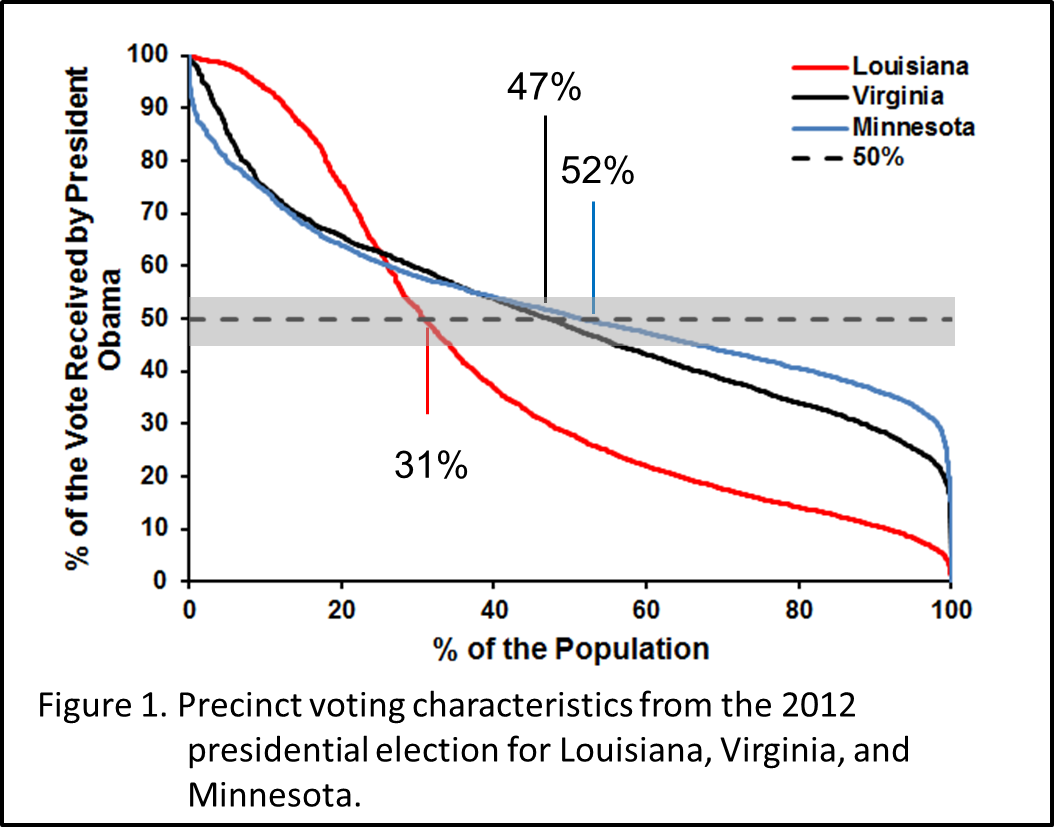 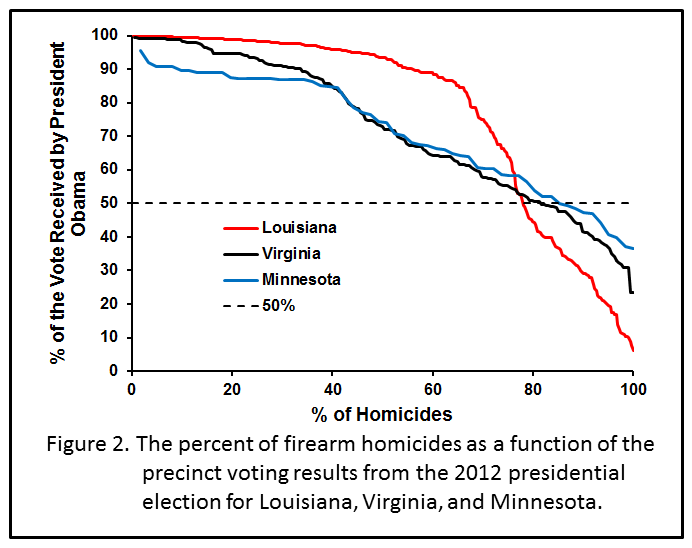 The mapping of firearm homicide to voting precinct provides strong evidence that the United States does not have a systemic "gun culture" problem. The majority of firearm homicides in Louisiana, Virginia, and Minnesota occurred in the small fraction of precincts that contains concentrated Democrat voters. If one's goal is to reduce firearm homicides, then does it make more sense to spend time, money, and political capital to restrict everyone's Constitutional rights when the majority of the problem is restricted to a small subset of the population? A more effective approach would address the root causes of the culture of violence that appears to exist in these localized areas. Politicians that propose sweeping restrictions to Constitutional rights as a solution to the localized firearm violence problem are either ignorant of the facts, want to be seen as doing something, are callous about restricting Constitutional rights, or have other nefarious motives.

A future article will correlate the precinct homicide data with social-economic Census data to provide a more detailed understanding of the characteristics of the neighborhoods where firearm homicide is most prevalent.

David Waciski is a "Big Data" engineer and writer. He can be contacted on Twitter @DWaciski.