Fast Track to a Bad Deal

On January 9, the Democrat and Republican establishments jointly introduced a bill designed to give Congress's constitutional authority over trade to President Obama. It is officially called TPA (Trade Priorities Act) and is usually referred to as "Fast Track," because it puts any trade bill that Obama negotiates on a "fast track" to passage without the possibility of congressional amendments.

When Fast Track was first invented by Secretary of State Cordell Hull during President Franklin D. Roosevelt's administration, it was a great idea. In those days, Congress would normally place protective tariffs into any trade bill in order to give import-competing industries that were located in their districts special advantages. When trade is balanced, exporters lose out whenever tariffs are applied to imports.

Roosevelt used Fast Track to negotiate a free trade agreement with Canada which greatly reduced tariffs on both sides of the border, boosting both U.S. exports to Canada and Canadian exports to the United States. Both parties benefited. Trade increased, but stayed balanced. Jobs lost competing with imports were replaced by even better jobs producing exports.

This year's version is designed to help President Obama negotiate a multination trade agreement called the "Trans-Pacific Partnership" (TPP) with countries of the Pacific Rim including Vietnam, Malaysia and Japan, three countries that run big trade surpluses with the world and with the United States.

In their press release, the sponsors all claimed that TPA would increase jobs by boosting exports:

• Democratic Senator Max Baucus: "TPA legislation is critical to a successful trade agenda. It is critical to boosting U.S. exports and creating jobs. And it's critical to fueling America's growing economy."

• Republican Representative Dave Camp: "The Bipartisan Congressional Trade Priorities Act will give us the tools we need to move more job-creating trade agreements..."

The following graph illustrates their fallacy. It shows that even though U.S. exports, as a percentage of GDP, have been increasing in recent decades, economic growth (per capita real GDP) has been slowing, a decline paralleled by declining net exports (exports minus imports) as a percentage of GDP. 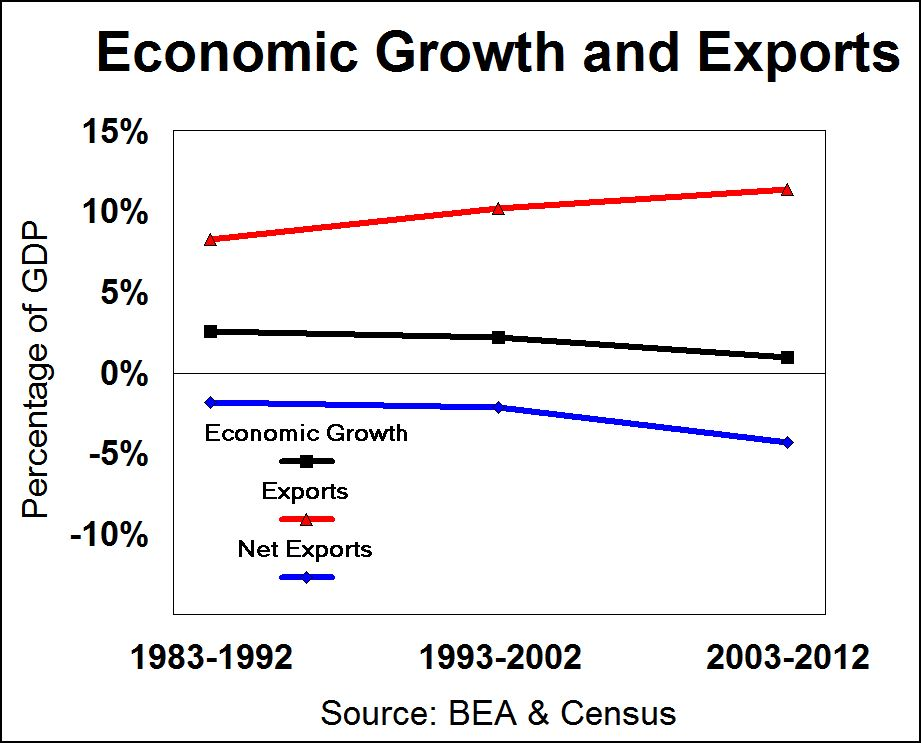 If trade is balanced (i.e., when net exports are close to zero), then growing trade helps both countries. But if trade is unbalanced, the key trade statistic for judging a trade agreement is the change it produces in net exports (exports minus imports). When net exports deteriorate, jobs lost to imports are not replaced by jobs producing exports. Instead they are simply lost. Economic growth is slowed while manufacturing workers are forced into unemployment or into lower-paying jobs in the service sector.

How have recent trade agreements performed? Let's start with President Clinton's NAFTA, which went into effect on January 1, 1994. As shown in the graph below, American net exports with Mexico soon began to deteriorate. In 1993, U.S. net exports to Mexico were a positive $4 billion. By 2012, that statistic had fallen to a negative $54 billion. 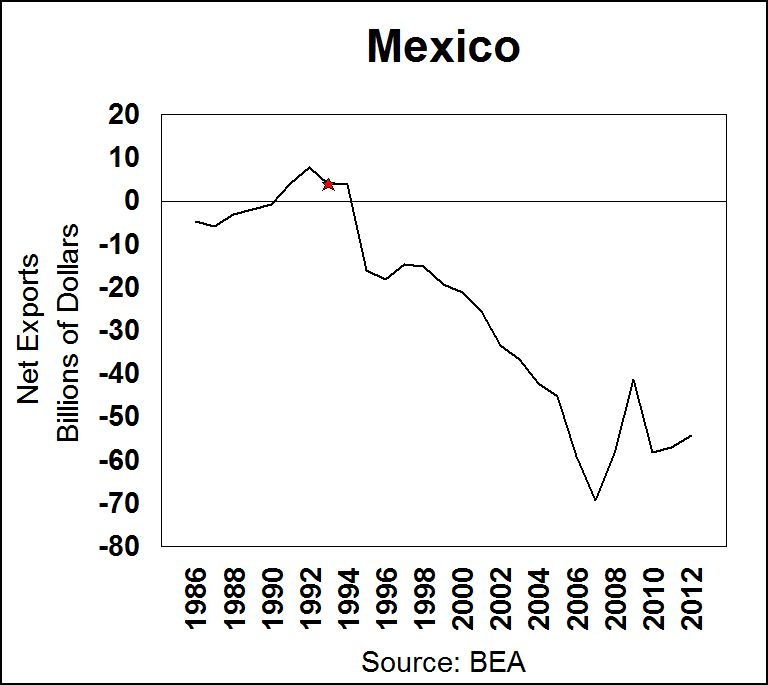 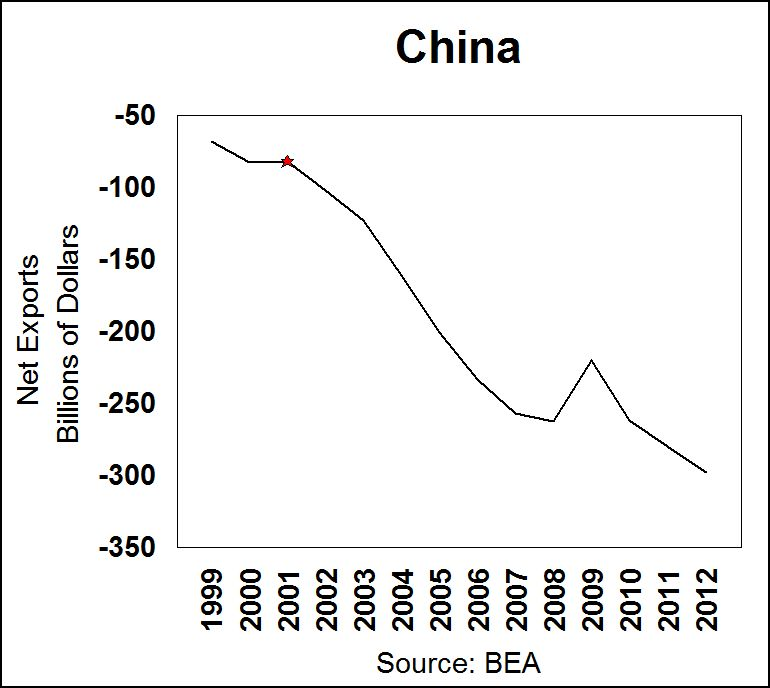 Or take the U.S./South Korea "free trade" agreement that President Obama and President Bush negotiated. Over the year ending in March 2012, the month it went into effect, U.S. net exports to South Korea were a negative $6.4 billion. By the year ending in September 2013, net exports had fallen to a negative $12.6 billion as shown in the graph below: 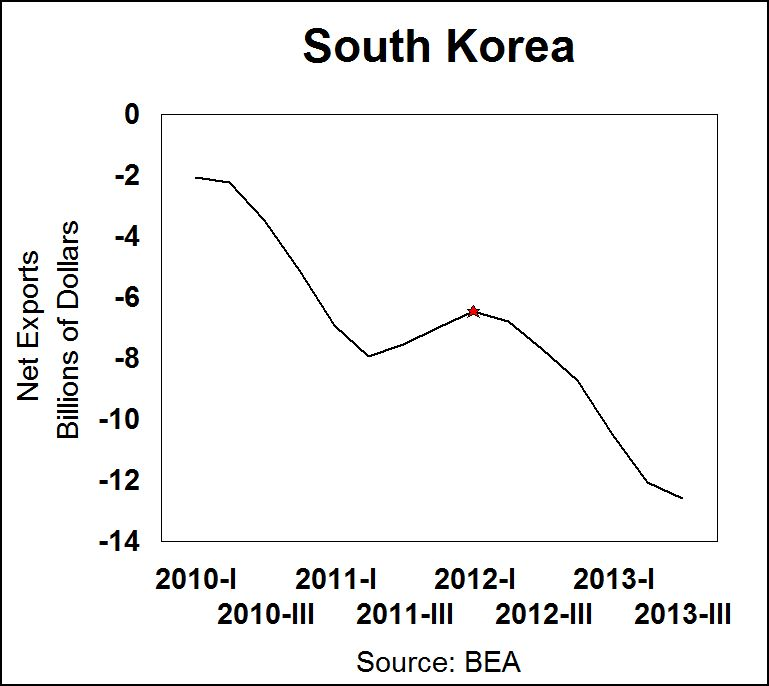 Unlike Canada, all of the above countries cheat, as evidenced by the huge quantities of dollar reserves each of them has put together as byproducts of their currency manipulations. There are myriad ways that countries cheat these days, not just currency manipulations and tariffs. Some subsidize exports. Some place hidden or not so hidden barriers on imports. Some extract billions of dollars through trumped-up lawsuits against U.S. companies. Some steal intellectual property. Some impose discriminatory regulations.

There is at least one politician who has figured most of this out. Rep. Alan West, who was redistricted out of his Florida Congressional district by the Republican establishment, is fighting Fast Track. In a commentary that he wrote for Breitbart, he said:

All trade agreements come with predictions of new jobs for Americans, but those promises are always empty. Obama said our free-trade deal with Korea would be a major job creator, but after it went into effect, sales of U.S. goods fell and imports from Korea rose. When you hear someone say TPP will create jobs, hold on to your wallet.

Chinese companies are already investing heavily in Vietnam to gain duty-free access to the American market under TPP and destroy the textile, shrimp, and catfish industries in the Southeast, a region that voted against Obama.

West is probably correct. Trade negotiations with Vietnam, Malaysia, and Japan, countries that already run massive trade surpluses with the United States and the world, are unlikely to yield anything like balanced trade. Such an outcome would require that they sacrifice the short term (e.g., economic stimulus) and long term (e.g., investment and innovation) gains they derive from imbalanced trade with the United States. Trade negotiators for the U.S. are likely to continue striking poor deals that are harmful for U.S. workers and diminish U.S. economic growth.

Fast Track makes the odds of a bad deal approach certainty. Absent Fast Track, other countries must at least be concerned that Congress might object to ill-conceived and imbalanced deals. Under Fast Track, the president can set the agenda for Congress, which allows his negotiators to pass a deal much farther from what Congress would prefer than they otherwise could. The president's weak negotiating position becomes America's.

There is one way that Congress could turn around this fast track to a bad deal. The Trade Priorities Act should specifically require that any trade agreement include automatic tariffs that will be imposed upon the products of any agreement country that is running a trade surplus with both the U.S. and the world.

This could be done through inclusion of the Scaled Tariff, a tariff which balances trade without protecting particular industries. It is a specific country variable tariff that increases as the trade deficit with that country increases and disappears as trade approaches balance. It is only applied by trade deficit countries and only at a rate proportional to the bilateral trade deficit.

The revenue from the hopefully short-lived tariff would help compensate for the unemployment that the trade deficits cause. It has the additional virtue of sometimes taxing the products of American corporations that outsource production of their products and then import them duty-free.

If trade is balanced, the odds of both countries winning dramatically increase. Unless its authors rewrite to require balanced trade, Congress should give the Trade Priorities Act no priority at all.

The authors maintain a blog at www.idealtaxes.com, and co-authored the 2008 book, Trading Away Our Future: How to Fix Our Government-Driven Trade Deficits and Faulty Tax System Before it's Too Late, published by Ideal Taxes Association. They are authors of a forthcoming book Balanced Trade: Ending the Unbearable Costs of America's Trade Deficits, published by Lexington Books.