Dude, where are my sunspots?

Welcome to Solar Maximum!  Sorry, it turns out to not be much of a solar maximum.  Not only is it a weak solar maximum, but it's late.  It was supposed to be here back in 2011.  But what can we say about natural events?  Just when you think you have them figured out, along comes reality and we're back to the drawing board.

We have been following the solar cycle, off and on, since March of 2010 here, with a follow up in February of 2013 here.  To summarize, we proposed a hypothesis that (1) as sunspot activity increased global temperatures would increase, and (2) that AGW proponents would hail the increase in temperatures as proof positive that the Earth is warming and that it's our fault because CO2 levels would continue to increase.

However, lackluster solar activity ensued, and the Earth stayed pretty much the same temperature.  The one may or may not have been related to the other, but since no significant warming resulted the AGW camp has not, as noted back in February, been making any extraordinary claims outside certain circles.  Those circles mainly being people who want to believe that the Earth is warming and that it is the fault of humans.

But then something happened.  A theory emerged in 2013 that the Earth actually is getting warmer, just not in the atmosphere as expected.  Rather, the increase is in the deep ocean.  The amount of increase is, according to the Discovery.com article cited, "alarming."  How alarming?  A chart is provided in the cited reference.

The chart shows, across total depth the oceans have warmed from about 8 to about 20 from 1959 to about 2009.  Astute observers and students of AGW material will ask the obvious question: "From 8 to 20...what exactly?"  From the chart we can see that we are not talking about degrees, which is the unit of measure most people associate with measuring heat. 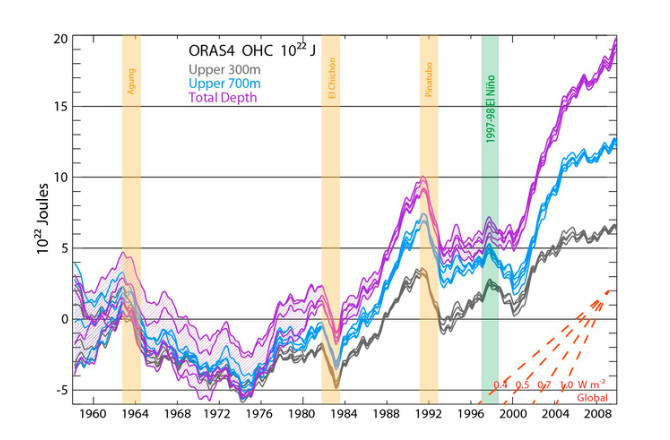 Rather, the increase is in 1022 joules.  Joules are a measure of energy.  The relationship of the joule to other units of measure is straightforward, but probably of little interest here.  For the sake of everyday usage, 4.184 joules is the amount of energy required to raise the temperature of 1 gram of water by 1 degree Celsius (see Engineeringtoolbox.com).

Of course 1022 is a very big number.  1021 joules are consumed by the entire human race every 2 years, and 1022 is an order of magnitude greater than that.  So this must mean that the oceans are on the very brink of boiling away, right?  Actually it requires 1024 joules to raise the temperature of all of the Earth's water by 1 degree Celsius.  Feel free to have fun with the math that this information opens up, but it would appear that the scale of the chart may be considered deceptive and the oceans are safe from boiling away any time soon.  Furthermore, the chart goes back only 50 years.  This is, as is so often the case, an insignificant amount of time and without data we cannot say with certainty that the change noted is unusual, let alone unprecedented.

Also, as with much work in this field, there is little or no attempt to draw a causal link between human activity and the observation.  It appears to assume that there must be a link since CO2 levels rise, and the amount of energy locked up in the oceans also rise.  Post hoc ergo propter hoc (after this therefore because of this) seems to be the model offered.

Many years ago it was believed that for waves to travel there must be a medium.  Therefore, there must be a medium in which light waves travel from the sun to the Earth.  No one could ever sample the substance, but the best understanding of how light travelled required there to be a medium.  So it was declared that there was a medium, and it was called the luminiferous ether. So certain were scientists of its existence that calculations of physical properties, like density and refractive properties were published.  Experiments were devised and, when the results were diametrically opposed to the prediction, new experiments were devised.

The existence of the luminiferous ether was never disproven.  But no proof ever emerged, either, and at the same time wave theories emerged that provided consistent results even in the absence of a medium.  The concept of luminiferous ether has been abandoned, which is the normal fate of flawed theories.

But AGW "science" has not been abandoned, at least not yet, despite certain parallels with luminiferous ether theory and other dead-end paths.  Perhaps there is something of value to be learned through the study, but until they can at least define a proper experiment and predict a result accurately, is there any reason to believe that the value of what is to be learned is worth the cost imposed by programs suggested by AGW proponents?

We have been treated recently to the spectacle of scientists and eco-tourists stranded in ice on a mission to prove that there is no ice, chronicled here and elsewhere.  There is certainly no animosity, and as long as they are paying their own way then there is no harm in the expedition.  And, as one who patrolled beneath the arctic ice on a submarine in an earlier career, I can understand unusual cravings when isolated from civilization and rise to the defense of U.K. Guardian reporter Laurence Topham (though not necessarily for peanut butter and banana milkshakes). Still, it is amusing at some level. Perhaps we should adopt a unit of measure when dealing with these attempts at relevancy, something like (WARNING! Link is to a clip from South Park and so may not be suitable for all audiences) this.

Tom Bruner is not a scientist.