In a desperate attempt to slow the rise of the Chinese currency, known as the yuan, the Treasury Department website reported on January 15th that Chinese holdings of U.S. Treasuries securities increased $12.2 billion for the month of November to an all-time record of $1.317 trillion. Many Americans are misled into thinking that China holding 7.5% of U.S. debt is a sign of the country's economic strength. It is rather the Communist Party's attempt to devalue the exchange rate of the "yuan" currency, whose 21.5% rise since 2010 has hammered the competitiveness of Chinese manufacturers. As jobs are relocating back to America to gain access to cheap energy, China is threatened with mass unemployment and a spectacular banking crisis. With the nation in turmoil, China's new President Xi Jinping is now wielding the communist hammer on China.

When the Soviet Union collapsed in the early 1990s, China's communist economy imploded as inflation skyrocketed from 10% to 25%. The United States, Europe, and Japan saved the Chinese by allowing the nation to devalue its currency by 68% and gain tariff-free export rights to the world's largest markets. China's radically undervalued yuan currency allowed the nation to import manufacturing jobs and export low-priced products under a form of state-sponsored capitalism called "Socialism with Chinese Characteristics". From 1993 to 2008, China's economy quadrupled, raising 500 million people out of abject poverty. But the U.S. economy only doubled, Europe's rose by just half and Japan stagnated.

Last October 19th, I published "Why China Wants to Dump the Dollar" to explain that how combination of inflation in China and cheap oil from America's fracking boom had undermined China's export competitiveness. Over 240 million Chinese are employed in "contract manufacturing", a business with avery low average profit margin of 3.5%. When China devalued its currency by 68%, corporations in developed nations could outsource their manufacturing to China and more than double profits.

But manufacturer's input costs for energy average 150% of the cost of labor. With America's new fracking boom since 2008 driving natural gas prices down to 1/3 of comparable international prices, China could offer free labor and sometimes still not be competitive with the U.S. based manufacturers. 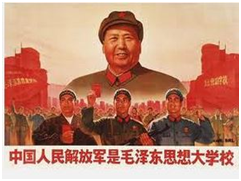 Since 2008, the Obama Administration pursued a policy of deficit spending stimulus that caused "internal devaluation" of American wages by driving the value of the U.S. dollar downand inflation up. Normally in a recession wages do fall, but commodity costs for oil, food, and housing tend to fall faster. This decline lessens the pain on worker's disposable income. But $5.3 trillion of deficit spending "stimulus" since 2009 drove the cost of oil up by 150%, cost of food up by almost 21%, and residential rents up by over 15%. Worker wages over the last 5 years failed to keep up with 9% of inflation and saw no benefit from a 9% gain in worker productivity. This explains why corporate profits margins are 70% higher than their historic averages and stock market has been roaring higher.

Unlike other developing nations that experienced rapid growth of exports, China has issued very little sovereign debt. This is often reported as a sign of stability versus the United States' $17 trillion of sovereign debt. But with China's four "state-owned-banks" controlling 75% of the nation's loans issued to their massive "state-owned-enterprises" that dominate manufacturing, China paid for its "economic miracle" by leveraging bank lending to astronomical heights. Compared to the U.S. banking system's 7% collateral to loans, Chinese banks only have a 2% collateral cushion.

This also assumes that Chinese statistics can be trusted. On October 6th, Zheng Yuesheng, a spokesman for China's customs administration said "It is very likely that China has overtaken the U.S. to become the world's largest trading country" after he reported China's total trade grew at an annual rate of 7.6% to $4.16 trillion last year. What he forgot to mention is that Chinese manufacturers export about $400 billion of products tax-free across the border to Hong Kong and then reimport the products tax free into China to avoid paying corporate and value added taxes. The real trade number is probably less than $3 trillion, substantially below the U.S. $3.9 trillion of trade.

According to a November report by international accounting giant Price Waterhouse Coopers, China's ten largest banks reported that delinquent loans increased by 333%, yet the banks reduced loan loss reserves by 33%.

China is also notorious for "shadow banking," high interest loans on the black market. JP Morgan Chase bank estimated that from 2010 to 2012 the size of China's shadow lending market doubled, reaching around $5.95 trillion, about the size of the entire Chinese economy. The Financial Times reported about 6% of all shadow borrowers went bankrupt between October first and December 31, 2013. According to Online Lending House, an advisor that tracks the industry, "the liquidity squeeze at the end of the year and a loss of faith by investors" could result in "80 or 90 per cent" of the borrowers going bankrupt.

On Jan. 6th, China's National Audit Office also reported that local governments across the country owed more than $2.96 trillion in outstanding municipal debt as of June 2013, an increase of nearly 70 percent from 2010, when a similar audit was conducted. Local government in China has always been associated with guanxi. This refers to the ancient Chinese tradition of currying relationships through exchanges of favors. In America we usually refer to this exchange as bribery and crony capitalism.

In June and December, the Chinese almost suffered the equivalent of the September 15, 2008 collapse of Lehman Brothers in the United States that started an electronic bank run on many American banks. As depositors pulled money out of local banks, the loan rate between Chinese banks went up by 500% in a matter of days. The Peoples' Bank of China, equivalent to the U.S. Federal Reserve, was forced to flood the Chinese banks with liquidity, but this could only be accomplished by printing gobs of new yuan. As this new yuan continues to circulate, the inflation rate will move up.

The United States has been the biggest single export target for China, but the Obama Administration's deficit spending has exported massive amounts of inflation to China's highly leveraged economy. Food and housing costs have more than tripled since 2008 and the wages of workers in contract manufacturing have gone up by 400%. It has been estimated that every 10% rise in the exchange rate of the yuan currency should have result in 40 million Chinese losing contract manufacturing jobs. After the 21.5% rise in the exchange rate of the yuan, about 86 million Chinese should have been expected to lose their jobs.

China is still a communist country and the Party completely dominates the banking system. Although Chinese banks desperately need to cut lending and build capital reserves, the Communist Party has directed the banks to keep funding insolvent state-owned-enterprises with newer and bigger loans that can never be paid back.

Ever since Mao Zedong killed 400,000 people during China's Cultural Revolution, there had been an understanding that no Chinese "Standing Committee" member could be held publically accountable for misdeeds. But President Xi Jinping has purged the Chinese Communist Politburo of Jiang Jiemin as head of the State-Owned Assets Supervision and Administration Commission, Zhou Yongkang as the former internal security czar, and Bo Xilai as the Secretary of the Communist Party's powerful Chongqing branch.

In this time of stress, Xi Jinping is reverting back to centralized authoritarian policies. As Chairman Mao Zedong made clear, "Communism is not love. Communism is a hammer which we use to crush the enemy."