Carl Rohl-Smith (1848-1900) was a Danish-American sculptor who was classically trained in Europe and came to practice his craft the New World. In 1893 he worked on a commission from George M. Pullman, one of the richest and most powerful men in Chicago. It would cost Pullman $30,000 (almost a million dollars today) just for the statue he commissioned Rohl-Smith to execute. That's not counting the marble base on which the monument stood and other expenses.

Pullman wanted Rohl-Smith to create a bronze memorial that would stand on his property at 18th St and Calumet Ave. in Chicago. It had to be a work that commemorated the Fort Dearborn Massacre, a massacre that took place in 1812, near Pullman's mansion, and close to the hulk of a dead cottonwood tree, the Massacre Tree, that also stood nearby. Because the Massacre Tree "could not speak," Pullman wanted something more to mark the spot. He had the money and power to get what he wanted.

Smith had just finished a statue of Benjamin Franklin that stood in the rotunda of the Electricity Building of the great 1893 Columbia Exposition. Now, he was called upon to do something even greater. The Pullman commission was a chance to do something Rohl-Smith had never done before, display in public the almost nude bodies in the Greek tradition of heroic action.

Rohl-Smith set to work. He would create his masterpiece, "Black Partridge Saving Mrs. Helm." In so doing, he also created a controversy that still continues today, no matter how much the progressive rulers of contemporary Chicago would like to avoid it.

Carl Rohl-Smith's work led to the creation of a monument that is both a cultural and site-specific work of art, two concerns some contemporary artists and art critics want to avoid. The monument was located at the place where the events it commemorates happened. 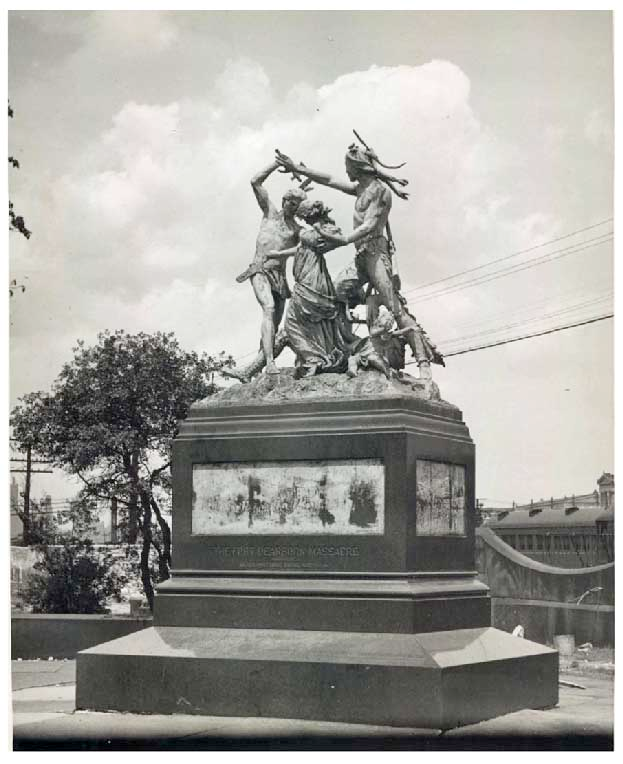 In 1812, Fort Dearborn, on the shore of Lake Michigan at the Chicago River, was a strategic location for the United States. The nation had doubled its size with the Louisiana Purchase in 1803, and the federal government needed a military presence on the western frontier. With the declaration of war against the British, the U.S. commander of the fort, Captain Nathan Heald, was order to evacuate.

On the morning of August 15, 1812, a party of men, women, children, and soldiers left the fort. When the column reached the spot where Pullman's mansion would stand, the party was attacked and massacred. During the attack, Mrs. Helm, the wife of an officer at the fort, was rescued by the Native American chief, Black Partridge.

Either Pullman or Rohl-Smith's wife must have given Carl a copy of Wau-bun, Juliette Kinzie's popular but sometimes unreliable history of early Chicago and the Fort Dearborn Massacre. In that book, Rohl-Smith read about the massacre. He was searching for a dramatic incident that could be frozen in a larger than life bronze sculpture. He found it in the story about Mrs. Helm. Her dramatic rescue became the focal point of Rohl-Smith monument.

A Notable Piece of Sculpture

When the drawings were done and the plaster casts approved, instructions were sent to the Henry-Bonnard Foundries at New York City to execute the statues. The New York Times for June 2, 1893 remarked that the sculptor "has chosen as incident of no small dramatic point." The Times then went on to add, "The monument will be the most notable piece of sculpture in Chicago outside Lincoln Park." After the bronze was finished, it was sent in a railroad car to Chicago.

The plaster casts for the monument remained in Chicago, where Rohl-Smith offered them to the Art Institute, who not so graciously declined to take them. Because Rohl-Smith had another commission in Des Moines, Iowa, the casts were sent there and displayed in the rotunda of the state capitol until 1904.

A Feb. 14, 1904 Des Moines Register story headlined "Indian Submits to Being Carved," claimed that the plaster cast was cut apart, put into boxes and stored, to be reassembled on a later date.

Although mistaken about the origin of the work, the article continues, "Custodian McCurdy first took the baby and, putting it in a box, shipped it over to Curator Aldrich as a first installment." Curator Aldrich supposedly stored the boxes at the Historical Building. The plaster casts, an important source for restoration purposes, have not since then been mentioned or found.

At the Chicago dedication of the monument in 1893, Pullman wrote a letter to be read. In it Pullman states he desired to erect "an enduring monument, which should serve not only to perpetuate and honor the memory of the brave man and women and innocent children -- the pioneer settlers who suffered here -- but should also stimulate a desire among us and those who are to come after us to know more of the struggles and sacrifices of those who laid the foundation of the greatness of this city."

Ex-President Benjamin Harrison was present at the dedication, too. He tried in his speech to refresh the memory of Chicago's beginning, saying, "We shall, after this lesson, be more willing to preserve by blood, if need be, that which was bought by blood."

After the dedication, Chicagoans and visitors from near and far came to visit the site of the Fort Dearborn Massacre Monument. Many sent postcards home with images of Carl Rohl-Smith's sculpture. 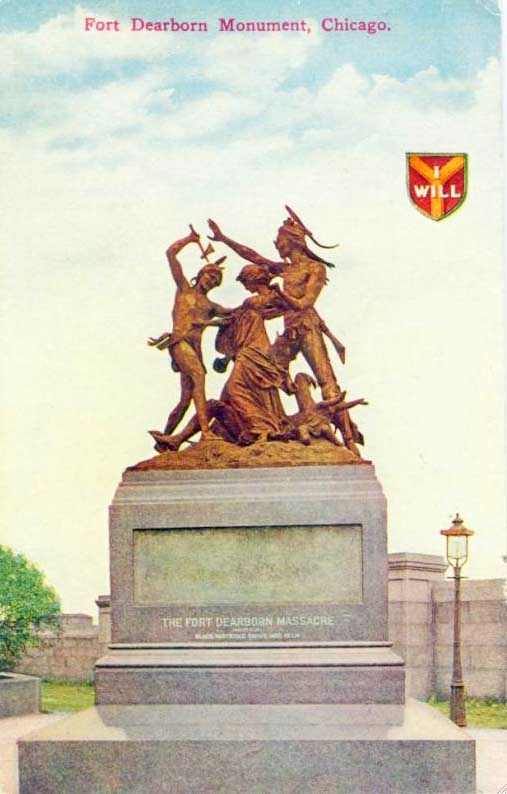 The Fort Dearborn Massacre was to become something of a creation myth. Referring to the massacre, the investigative journalist William T. Stead began chapter four of his famous 1893 book, If Christ Came to Chicago, by stating that "Chicago, though one of the youngest of cities, has still a history, which begins, like that of more ancient communities, in blood."

Chicago, however, was not destined to be forever young. Twenty-five years after Stead's book, the city and its population changed. Pullman's Prairie Avenue neighborhood declined. Wealthy Chicagoans moved elsewhere. By 1970, a new generation of Chicagoans turned to forgetting and rewriting history. The American settlers and soldiers who died at the Fort Dearborn Massacre in 1812 were transformed into "white invaders." Carl Rohl-Smith's masterpiece was removed from the Chicago History Museum and hidden from view.

In the revised story of the massacre, done the Chicago way, we are expected now to be above nationalism and beyond values in our art and history. John N. Low, a member of the Pokagon Band of Potawatomi and Executive Director of the Mitchell Museum of the American Indian takes that position. He has stubbornly opposes restoring the statue to its original site.

Low called the Rohl-Smith statue, "maudlin and over the top, a stereotypical depiction of American Indians." Following up that remark, Joe Podlasek, from the Art Institute of Chicago, said, "The statue didn't reflect the nuances of history." In fact, both critics are making parochial judgments. They seem to think a masterpiece can never be found at home.

It's been 202 years since the Fort Dearborn Massacre. For more than half that time the massacre was remembered by Chicagoans as one of the city's founding myths. Today, Carl Rohl-Smith's hidden monument stands as a symbol of our age, an age where history must be rewritten to conform to the ideals of globalism, multiculturalism, and a gray, uniform story that denies American exceptionalism. 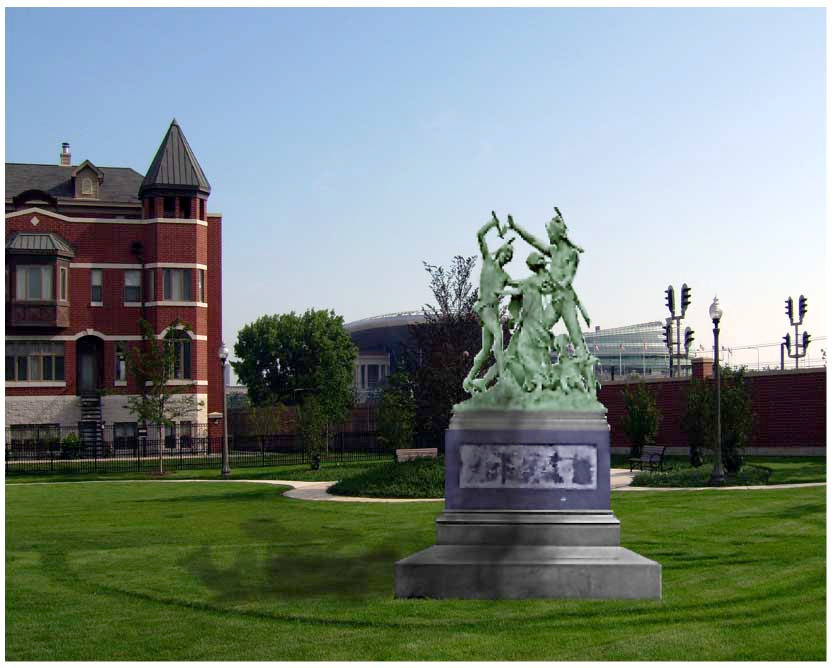 A few changes need to take place before Carl Rohl-Smith's masterpiece is restored to its proper place. Chicagoans will have to regain their sense that the city began as an American city, not a politically correct hodgepodge, ashamed of its past.

Then, there has to be a change in the thinking about public art. Public art must once again affirm both history and the representation of the human figure. In short, we must return to the Classicism of Carl-Rohl Smith. Given the present political climate in Chicago, these changes are unlikely to happen any time soon.

When last seen, Carl Rohl-Smith's masterpiece was cast aside in a damp City of Chicago garage below the overpass near Roosevelt Road and Wells Street. Half covered with a blue tarp, the sculpture collects dust, nuance and verdigris. 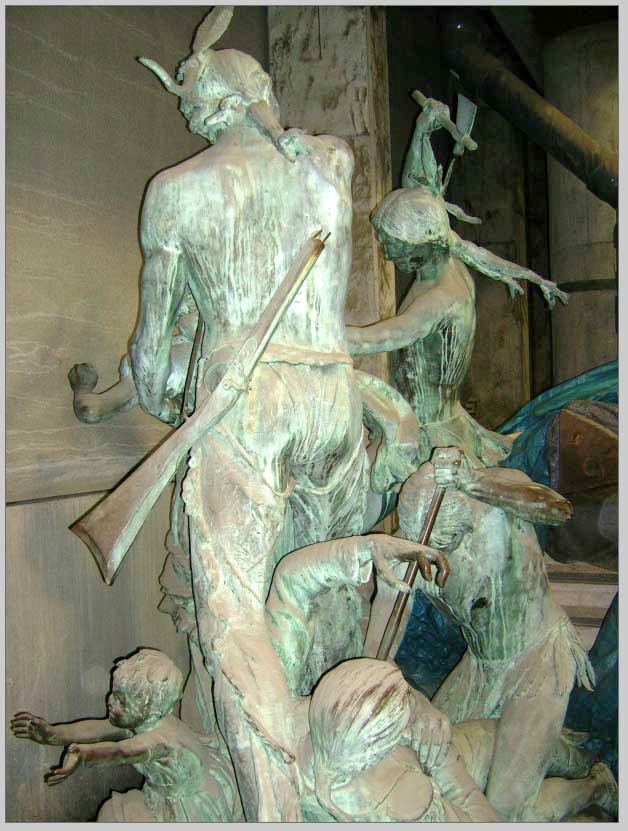