Are We Still a Good Country?

It is important to remember some guiding principles as we fight back against Barack Obama's crude and coarse behavior against our country.  Though the fight will be long and arduous, what Henry Gregor Felsen wrote in his 1961 book entitled Letters to a Teen-Age Son still applies.

The human need for and the essentials of goodness, decency and righteousness are as modern as they are ancient, and no future time will ever turn them into museum pieces.

Though Obama continues to malign, denigrate, and intimidate those who disagree with him, America is beginning to understand that Obama's moral compass is predicated on mean-spiritedness.  The attack on Dinesh D'Souza is the latest in Obama's "ongoing persecution of Republicans and conservatives" and "mirrors the attacks by the fascists of Europe on their opponents in the 1930s."  As Thomas Sowell has pointed out, "[w]hat does your right of freedom of speech mean if saying something that irritates the Obama administration" results in a double standard of treatment?

As Obama continues to pander to the lowest common denominator and lie about his opposition's alleged war on women, America needs to remind him that "to miss knowing the difference between sex and the awareness of mating is to miss one of life's most perfect, most meaningful moments."  The casual sex as depicted in ObamaCare advertisements and his flippancy about young people will never compete with the profound knowledge that there comes "a time when freedom, pleasure, opportunity, lack of responsibility, self-centeredness, and self-indulgence are not, somehow, enough" to fill a life.

But in Obama's blatant attempt to make serfs of young people, he indulges in the weaknesses of youth and makes it difficult for them to grow and evolve.  He denies them the rewards of hard work, hurts them by shortchanging their ability to make money and be successful, and then wallops them with having to pick up the tab for health care -- all the way telling him that he is their buddy, their go-to person.

It is all part of his plan to subdue young people and make them submit to his vision of government.

Our young people do not need a pal in their president.  Pals are "those friends of whom a young person most approve as they are[.]"  But a leader -- an adult -- understands that "parents are the only two people in the world upon whom [a child] can safely depend for disapproval.  Parents are the only ones a child can trust implicitly to advise, guide, criticize, and control a child whether it hurts ... whether [he/she] likes it or not, even if it means [the] temporary loss of [a child's] friendship and good will."

And what does Obama do?  He tells young people that "marijuana is no worse than cigarettes or alcohol." 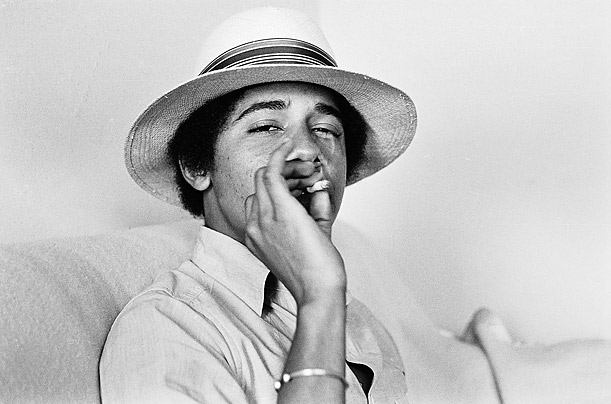 This despite the medical evidence that shows the harmful effects of marijuana use.

Young people yearn for adult guidance -- a steady gyroscope -- knowing that "while they rant and rave, ... the reliability of that instrument will help steer them in the right direction."  Obama is an irresponsible parent to America's children.

Americans are inherently a decent group.  And no matter how many times Obama threatens us, we will meet his "anger with calmness," his "punishment with dignity," his  "force with courage," his "accusations with rebuttals," and his "criticisms with explanations."  Though our positions are repeatedly attacked, our identity is intact.

We will continue to fight to maintain the integrity of the American Constitution even when this 44th President clearly shows his disdain for it.  We know that his shakedowns will continue; his lawlessness will reign as he continues to dissociate from the fundamentals of America.  Whether he is called a Marxist, a jihadist, a communist, a socialist -- the titles all bespeak a belief system that is contrary to American ideals and ideas.

And the people are beginning to see through that dazzling smile as they suffer the iniquities of his rule.  Imperial President Obama continues to waive the law to fit his whim.  He continues "to make a mockery of the rule of law."

Obama has foregone "understanding, affection, kindness, assistance, tolerance and good will," be it for fellow Americans or our allies.  Thus, the Canadians have patiently waited regarding the Keystone XL pipeline, and the Israelis realize they cannot rely on traditional presidential support for assistance.  Moreover, the gross negligence of ObamaCare is simply ignored by this White House.  Facts don't count; only the fiction that Obama has created remains.

Instead, he has become a harbinger of broken promises -- a charlatan who must disguise his true intentions under euphemistic jargon.

His constant race-baiting whining describe a petulant boy.  And as he revels "in resentment, ... our citizens are divided.  We are divided because we have a president who is angry and hostile, juvenile and racist, ideological, narcissistic, and power-hungry."

Obama truly has power to do good, but his "envy conceals its pinched green face behind  [a] sneer of contempt," and his "ignorance, muffled in the robes of [alleged] superior knowledge, closes the mind's door to new ideas."

We risk losing our republic if Barack Obama continues to refuse to "carry out sections of the immigration law" because he does not approve of them.  We will no longer be a self-governing people if Obama "succeeds in having international treaties under United Nations auspices govern the way Americans live their lives[.]"

[There is] nothing more common than to confound the terms of American Revolution with those of the late American War.  The American war is over, but this is far from being the case with the American revolution.  On the contrary, nothing but the first act of the great drama is closed.

We are in the midst of the second act of this great drama.  America is truly at a watershed moment.  What will we say when the next generation looks at us one day and, with accusing eyes, asks why we didn't stop Barack Obama's "contempt for American Constitutional democracy"?