Will the Mockingjay Catch Fire?

The more ripened I become, which is really just that self-delusionary way of saying I am "ontologically antique," the more I realize the fact that self-deception is a double edged feature that helps conserve our psychic equilibrium -- tentatively offering an illusory but necessary species of faux-hope for we bitter clingers to bitterly cling to. Such happy figments, arriving in the form of emotional "fail-safes," caress our ears in their myriad forms. I offer as evidence the following: "That knock under the car hood will eventually go away" or "Dear Mother will eventually pull through." As humans, so often we psychologically whitewash the world, even as the objective frigid blast of reality orients her harsh dials to the unyielding indicators of sorrow and ruin.

It is possible to know something, and yet not know it: to consent to a thing subliminally while simultaneously averting our inward eye so as not to perceive its true gravity. I suppose the vague idea of an impending American revolution has been rolling around in my head for some time now, although it has remained ensconced within its intellectual boundaries and was careful not to spill over into the sphere of my emotions -- the arena of visceral reactions where the gnashing of teeth and the trembling hand takes precedence over prudence. But I know it now to be inescapable. Civil and cultural war is at hand, lines have been drawn, and the center has not held. I do not know what form it will manifest itself in, but the sulfurous whiff of rebellion is in the wind, and I find such a destiny to be unyielding.

To some, such a crystal realization arrives through witnessing or suffering grave injustice, or perhaps comes in the ethereal revelation of a waking dream. For me, it arrived via the cinema -- having consented to accompany my wife to watch Catching Fire, the second installment of the Hunger Games trilogy. And while I freely admit that it had not been my burning desire to spend two and a half hours watching teens doing battle, gladiatorial style, in a jungle arena, throughout the course of the film I was stirred in my soul's marrow by the drama of a dystopic society held hostage to the despicable force wielded by its Capital City. Having been long degraded in their lives by a decadent Metropolis that is liberally composed with foppish narcissistic parasites, the film's put upon masses finally realize that they can abide civic injustice no longer, despite the heavy cost that such a rebellion will entail. 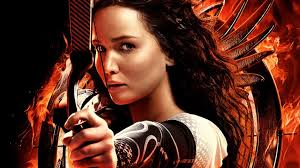 For those of you who do not know the film's back story, Panem is a post-apocalyptic society in crisis, located in the remnant of what was once America. Seventy-five years prior to the tale, as the result what occurred during the "Dark Days" (a failed rebellion), the outlying districts were brutally subjugated and forced to offer economic tribute to sustain the opulence of the vindictive Capital. In addition, two teen tributes (read Rome) from each of the remaining 12 districts are "reaped" by lottery and induced to provide blood sport for the Capital's "Reality TV" amusements -- with the sole survivor from the winning district meriting fame and increased food allotments for its residents. After a stunning series of events in the storyline, District 12's Katniss Everdeen, armed with deadly bow, finds herself the unlikely heroine of the 74th Games and the beautiful, but reluctant, face of the coming rebellion that is rising from the horizon like a storm cloud.

All revolutions require a focal point: a face or an image that serves as the ideological center to which the rallying cry of progress or return can be galvanized. Most frequently, these explosive triggers are as the result of sacrifice or great courage, and our political and cultural memories are ignited by the ingrained flashbacks of self-immolating monks or of a lone Chinese youth starring down the business end of a tank convoy. Such pictures, in our mind's eye, stir us at the gut level; and who knows exactly what that animating snapshot in time will be that finally moves men to deeds of brave and reckless abandon? When moral red lines are trampled, who can predict which fateful catalyst will compel us to fiercely stare into the maw of tyrants?

For Panem's salvation, it is Katniss the Mockingjay who seizes the imagination of not only those who toil in servitude in the hinterlands, but in the luxurious Capital itself. It is her stalwart character evidenced by friendship, mercy, selflessness, sacrifice, and love that changes not only individual hearts, but the fickle tide of the moral/political as her courageous deeds embolden and unite the resistance. When Katniss, "the girl on fire," twirls to the eyes of countless millions before the 75th Quarter Quell, all Panem watches on as her blazing white wedding gown is consumed, leaving her costumed in the guise of the explosively figurative Mockingjay. Without words, she is solidified as the veritable emblem of the revolution. And upon such theatre are liberation movements founded.

Driving home following the film, my mind raced to the similarities inherent within Panem's Capital (a Latin phrase evoking panem et circences -- bread and circuses) and our own metastasizing Stage Four Lymphoma: Washington D.C. And while I would not be so unmeasured as to liken our current straits with that of a quasi-Roman science-fiction dystopia, a thoughtful man cannot disengage himself from current events which reveal that America's Capital City is now garroting our own liberties from a hundred different directions, under the sinister and infantile aegis of a fool's security -- all fueled with bread and circuses.

While the banal curse of Reality Television holds its idiot sway over our credulous millions with competitive cuisine, the crowning of illiterate rap idols, and overage minxes in search of mercenary love between interminable face-lifts, a malevolent nest of scorpions in Brooks Brothers suits has engaged a domestic army of tax collectors to extract every dime that you owe them on a meandering pilgrimage to Communism. Faced with these obscene diversions, how is it possible for the mass of men to know that the nation's superstructure is melting and its support beams are giving way? When we are feted with a diet of titillation and the glittering word for today from our Ministry of Truth, who hearkens anymore to the Watcher on the Wall that the enemy is not only within the gates, but that he has driven his talons deep within our Capital City?

Indeed, even as I write, a South African Marxian "fellow traveler's" biography is being spun into apotheosis -- morphing him into a veritable George Washington of the planet for the intellectual consumption of drones with unblinking eyes. Similarly, the puerile antics of totalitolerant celebrities are stretched across the yawning abyss of our rapidly dwindling attention spans, as we conjecture with bated breath which heartthrob will escape the confines of Survivor's Redemption Island. While eyes are slumbering or calculatingly diverted, America's once hallowed Capital City is injecting poisonous feelers into its hinterlands nearly uncontested, and many of us can only absorb ourselves with a jejune preoccupation with the novel, the erotic, or the fashionable. Are we not the bottomless bellied children of mindless consumption: coveting our bread and circuses as we death spiral all the way down to an ignominious thud that cracks the West? Left to the Progressives, our future is Panem -- although perhaps without its rough edges and flair for the dramatic. America must be more than just a hollow way-station for centralized subjugation as our patrimony of limited government falls prey to the Collectivist version of the "Constitutional Knockout" game.

Like Panem, the Progressive political caste of America, with its supporting menagerie of true believers and sycophants, live their effeminate fantasy-driven existences well insulated in the posh caverns of our morally ruthless cities -- doling out bread, games, and diversion in their attempt to ride the tiger of popular dissatisfaction that is inexorably approaching an unstoppable chain reaction. When the inevitable occurs, and tyranny no longer bothers to drape itself in its guise of virtue, then we can be assured that the velveteen gloves will have come off, leaving the compassionate face of managerial oligarchy to unveil her true cynical countenance. Soon, far sooner than we may even comprehend, it will be time to sharpen those plowshares into more appropriate implements to get our points squarely across -- loud and clear.

If a significant enough number of patriots are willing that America should pull back to her constitutional first principles, what means shall we use in bringing about freedom's vindication? Revolutions can be velvet or blood-drenched, depending upon how hard the stakeholders want to bear down on passion's throttle. It may well be that in the end, those productive nodes of our society: doctors, businessmen, tradesmen, engineers, inventors -- all in the spirit of Rand's Atlas Shrugged, will merely cast down their calculators and tools and walk away from it all, or else cry out at the top of their lungs:

No More! We shall not be servants who are conscripted to prostrate ourselves in service to your wretched utopia. And having foregone pleasure and educated ourselves to virtue and excellence, we refuse to acquiesce to the covetous mob instincts of a broken republic. Spin your own lice into gold! To Hell with you -- it stops here!

I repeat friends: I have no idea whose face or upon what image our revolution will coalesce under, only that it will occur in the fullness of days. No regime is impermeable to truth forever, although I should have thought that the malignant treachery of Benghazi or a score of other beguilements were of sufficient enough gravity to topple the Wretched House of Obama. But even that wretch himself is only a two-bit player on an expansive battlefield where the winner will ultimately be either Constitution or Commune. We must know in the depth of our being that the grand stakes that compel us are both the way in which we morally perceive ourselves as men, as well as the character that our souls will retain in relation to the state. When the hour arrives we will surely know it -- it will be as unmistakable as a heart attack. Revolution, in the noble service of reclamation and rebirth, can be an act of exhilarating clarity. When it indeed catches fire, its flame will prove more than sufficient to illuminate our world.

Glenn Fairman writes from Highland, Ca. He can be contacted at arete5000@dslextreme.com.