Warning: mysqli_free_result() expects parameter 1 to be mysqli_result, bool given in /var/www/html/americanthinker/admin/common/functions/func.general.php on line 126
 What the Pope Really Said - American Thinker
|

What the Pope Really Said

Pope Francis issued his first apostolic exhortation this week, and it has created quite a firestorm. A Google news search on 'Pope' following the release of exhortation turned up all kinds of stories proclaiming that Pope Francis says Capitalism is 'evil' from major news sources raning from the Chicago Tribune to ABC News to the Washington Post.

Yahoo News ran AP writer Nicole Winfield's article about the exhortation, Evangelii Gaudium, (The Joy of the Gospel), with a headline that initially said something like 'Pope Blasts Capitalism, says rich should share the wealth.' After 12 hours the headline changed to "Pope issues mission statement for papacy," but the lead on the story stayed true to Winfield's intent:

Pope Francis denounced the global financial system that excludes the poor as he issued the mission statement for his papacy on Tuesday, saying he wants the Catholic Church to get its hands dirty as it seeks to bring solace and mercy to society's outcasts.

Reuters writer Naomi O'Leary is on the same page as Winfield:

Pope Francis attacked unfettered capitalism as "a new tyranny" and beseeched global leaders to fight poverty and growing inequality, in a document on Tuesday setting out a platform for his papacy and calling for a renewal of the Catholic Church.

It would appear that both -- along with the rest of the media pretty much ignored what the Vatican actually said about Evangelii Gaudium. In a lengthy summation of the exhortation, The Vatican News Service (the Holy See Press Office) devoted all of one-half of a paragraph to the Pope's message about economics.

In relation to the challenges of the contemporary world, the Pope denounces the current economic system as "unjust at its root". "Such an economy kills" because the law of "the survival of the fittest" prevails . . . "A new tyranny is thus born, invisible and often virtual", of an "autonomy of the market" in which "financial speculation" and "widespread corruption" and "self-serving tax-evasion reign."

CatholicOnline responded to the many stories with a rebuttal: "Is the Pope an enemy of Capitalism? Evangelii Gaudium explains his views."

The rebuttal did not mince words: 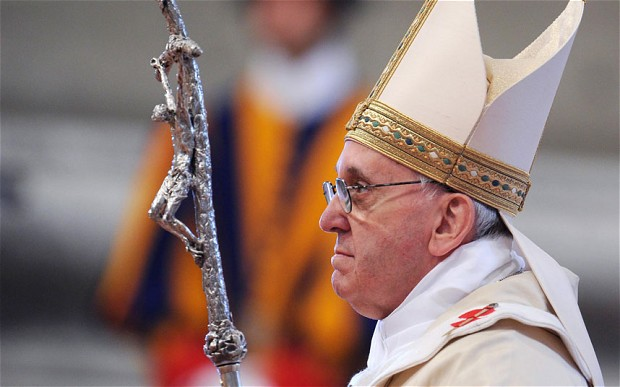 . . . Pope Francis explained some of his positions on key matters in a very official capacity. Among those positions was a warning that unfettered capitalism was a danger.

For Americans, especially conservatives, this may sound like an ominous sign, but it must be viewed in a Catholic light. Capitalism, if unchecked, enables the wealthy to become increasingly powerful without any substantial net benefit to the balance of society. It promotes a form of inequality in which only the wealthy profit by work and all others merely subsist.

So just what is the Pope saying in his exhortation?

Pope Francis' views on economics and capitalism have likely been influenced by a life spent in Argentina -- a country with an annual inflation rate of over 10%, where the poor live in slums and the rich live in gated communities, and where Liberation Theology came of age. But it's also evident that he is only saying our current economic system needs to be fixed, not tossed in the garbage. And it's not just our economic system that needs fixing.

Pope Francis also says in the exhortation that politicians should not pander to or prey on the poor for votes, that countries with high debt are doing a disservice to the poor, and that welfare programs are not the answer to the problem of poverty. He also calls for a greater emphasis on Catholic teaching on the principle of subsidiarity, which is absolutely opposed to all forms of "collectivism." So while Pope Francis is criticizing capitalism's negatives, he is certainly not endorsing socialism.

The exhortation needs to be taken as a whole, not cherry-picked apart depending on one's political viewpoint. In his exhortation, Pope Francis chides both liberals and conservatives, society in general, self-centeredness, secularism, totalitarianism, the Catholic Church, the division that exists among Christian Churches, the "silent complicity" that enables human trafficking, and even priests who deliver boring homilies.

Overall, Evangelii Gaudium might be best summed up as a call to the faithful to renew themselves in Christ. And, in general, Pope Francis is saying to the entire world, 'C'mon people, we can do better; we need to do better!' It's almost as if he is saying, 'with all the intelligence and brainpower in the world today, it's hard for me to understand why things are getting worse instead of better.'

What Pope Francis might be saying to all of us is that there is an awful lot that needs fixing in this world, and all it starts with each of us fixing ourselves first.