Warning: mysqli_free_result() expects parameter 1 to be mysqli_result, bool given in /var/www/html/americanthinker/admin/common/functions/func.general.php on line 126
 The Solar Swindle - American Thinker
|

Solar electricity is growing, promoted, and most importantly, heavily subsidized.  The promoters of solar electricity claim that it is close to being competitive with conventional sources of electricity.  That is a fantasy.

Solar electricity is expensive and impractical.  If it weren't for government subsidies, some explicit and some disguised, the solar industry would collapse.  The many claims of competitiveness are always based on ignoring subsidies provided to politically correct renewable power, ignoring the costs associated with unreliability, and ignoring the cost of backup fossil fuel plants.

An example of a hidden subsidy is the California Renewable Portfolio Standard that mandates utilities to obtain 33% of their energy from so-called renewable sources by 2020.  This mandate forces utilities to contract for expensive sources of energy, such as solar.  The cost is passed on to the utility customers with the connivance of the government.  Although the motivation behind the California scheme is to reduce carbon dioxide emissions, politically incorrect sources of CO2-free electricity, such as nuclear and large-scale hydroelectric, can't be counted as renewable.

Figuring out how much solar electricity costs is tricky.  Most of the cost is the capital cost of building the plant; in favorable situations, a solar plant costs 15 times more than a fossil fuel plant per KWH generated.  How one assigns this initial capital cost to the electricity generated over the life of the plant depends on economic assumptions involving interest rates.  The amount of sunshine can vary by as much as two to one, if you compare sunny Arizona locations with cloudy European ones.  Photovoltaic technology, using electricity-generating panels, is the currently favored technology.  An alternative technology is thermal solar or plants that use reflectors to concentrate sunlight to generate high-pressure steam, or other high-pressure gas, to operate turbines that drive generators.  The estimates in this article refer to recently constructed photovoltaic plants.

The cost of solar electricity at the plant gate is about 25 cents per KWH, or about 5 times more than conventional electricity.  It may be 50 cents per KWH in cloudy northern areas.

It is true that the cost of solar panels has greatly decreased in recent years.  This decrease has to do with technological improvements and overbuilding of capacity in the Chinese panel manufacturing industry.  However, even if the panels cost nothing, solar electricity would not be remotely competitive.  The panels are only part of the cost.  One also has to pay for the land, the mounting systems for the panels, and other infrastructure.

The cost of a solar electricity plant is usually quoted as so many dollars per watt.  For example, many large-scale plants cost about $4 per watt to build.  The watts in this case refer to the maximum amount of electricity the plant can produce when the sun shines squarely on the panels, or, more technically, the number of watts that can be generated when the panels are illuminated with sunlight with an energy content of 1,000 watts per square meter (approximately the energy flux of full sunlight).  In the best locations, a solar plant with fixed panels can generate the equivalent of full power 25% of the time.  That is called the utilization factor.

As an example, the Agua Caliente solar plant in Arizona, when completed in 2014, will be rated at 397 million watts and will cost $1.8 billion.  This works out to $4.53 per watt of capacity.  The cost of generating electricity from this plant has two components: the capital cost of building the plant spread out over the 25-year life of the plant and the annual maintenance cost for such things as periodically washing the solar panels that cover 4 square miles of land.  When a utility invests in a generating plant, it needs a rate of return on its investment great enough to stay in business.  It must pay dividends attract capital, maintain a good credit rating, and pay substantial taxes.  Roughly an 8% return on a generating plant investment is needed to maintain the business.  This means that if $1.8 billion is invested, the annual capital cost is similar to the payments on a 25-year mortgage at 8% interest.  This is a higher interest rate than one might pay on a home mortgage due to taxes and the need to attract risk capital.  The utility might finance half the cost at 4% or 5% and finance the other half with equity capital, for which a return of 10% or 12% is necessary.  The budget for the Agua Caliente plant would look roughly like this: 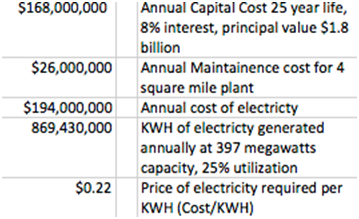 Believers in global warming alarmism will probably claim that it is worth paying 5 times more for electricity in order to reduce CO2 emissions.  But if they are really concerned about CO2, the obvious solution is CO2-free nuclear power, which is far cheaper and more practical than solar.

Wind power is the other renewable energy.  The capital cost of building wind farms is less than solar, and the utilization factor may be higher in favorable locations.  But, at best, wind energy costs 2-3 times more per KWH than conventional energy.  There are doubts about the useful life of wind turbines and many population centers have no suitable wind energy sites near enough to economically transport the power.

Solar energy and wind energy are nothing but a scam promoted by ideological fanatics in environmental organizations and allied special interests.  We all pay for the scam with our taxes and with our electric bills.

Norman Rogers is a senior policy advisor at the Heartland Institute, a Chicago-based think-tank.  His personal website is www.climateviews.com.