On Nov. 18, Democrat Senator Elizabeth Warren of Massachusetts delivered a floor speech with the ominous title "The Retirement Crisis":

There is a $6.6 trillion gap between what Americans under 65 are currently saving and what they will need to maintain their current standard of living when they hit retirement. $6.6 trillion -- and that assumes Social Security benefits aren't cut. Make no mistake: This is a crisis. [...]

I hold deep values, and I look at basic facts. Today, Social Security has a $2.7 trillion surplus. If we do nothing, Social Security will be safe for the next 20 years and even after that will continue to pay most benefits. With some modest adjustments, we can keep the system solvent for many more years -- and could even increase benefits.

And that's what our blue-eyed Native American wants to do -- to increase Social Security benefits. But if it is indeed a "basic fact" that "Social Security has a $2.7 trillion surplus," then it shouldn't be a problem to "increase benefits." We have the money; it's just sitting in some government account waiting to be drawn on, right, senator?

I'm relieved that Sen. Warren has "deep values," but other Americans can also "look at basic facts," and they don't see a surplus. That's because Social Security went cash-flow negative in 2010; before the payroll tax holiday of 2011-12. Since the end of that tax holiday, the system has continued to be cash-flow negative. Hence: no surplus.

In A SUMMARY OF THE 2013 ANNUAL REPORTS from the Social Security and Medicare Boards of Trustees, we read: "In 2012, Social Security's cost continued to exceed the program's tax income and also continued to exceed its non-interest income, a trend that the Trustees project to continue throughout the short-range period (2013-22) and beyond." That is borne out by Table IV. A1. For 2013, the table shows a shortfall between "Net payroll tax contributions" and "Scheduled benefits" of $57.2B. 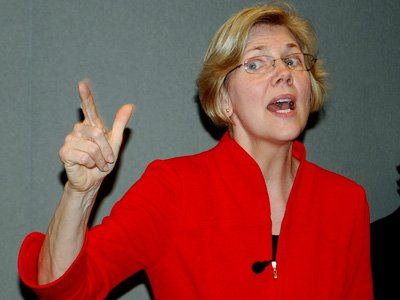 Again, there is no surplus. What Warren is referring to with her $2.7 trillion figure is not "a surplus" but the accumulated surpluses of the last three decades; what's erroneously called "the trust fund." And that also doesn't really exist. Congress spent those surpluses of yesteryear in the years that the monies rolled in. Talk about government "lock boxes" is for voters who have no idea how federal finance works.

The big problem with progressive programs that are funded by dedicated taxes, like Social Security, is that their dedicated tax revenues don't stay dedicated. Surpluses from dedicated taxes, like the payroll tax, get sent over to the general fund and are promptly spent. Such surpluses become "slush funds" that Congress spends on whatever it wants to spend them on. If such surpluses had not been spent and had indeed been locked up in some government "lock box," then the publicly held debt would be that much higher than it is. Democrat claims that Social Security doesn't impact the national debt are simply lies targeted at "low-information voters."

Former Gov. Sarah Palin got some flak recently for saying this about the national debt: "it's gonna be like slavery when that note is due." That hardly seems controversial. After all, the term "slavery" is often invoked to refer to situations where people lose some of their freedoms. For instance, people with compulsions and addictions are said to be slaves to their afflictions. So what's so monstrous and offensive about saying that the federal debt will be paid off by "tax slaves"? Nevertheless, Martin Bashir of MSNBC got in a big stink about Palin's comments, and called her a "world-class idiot."

I bring this incident up because Sen. Warren repeated a demonstrable falsehood in the Capitol but I can't find anyone who seems to care. Shouldn't Bashir be calling our Bay State paleface a "world-class idiot" or something?

Speaking of "world-class idiots," on March 14 Democrat Sen. Tom Harkin of Iowa introduced the Strengthening Social Security Act of 2013. Like Warren, Harkin wants to increase benefits. If you can't stomach wading through all the legalese, then read what the senator's website says about a feature of his bill:

• Improve the Long Term Financial Condition of the Trust Fund: Social Security is not in crisis, but does face a long-term deficit. To help extend the life of the trust fund the Act phases out the current taxable cap of $113,700 so that payroll taxes apply fairly to every dollar of wages.

There you have the Democrats' solution to everything: raise taxes. But taxing "every dollar of wages," "fairly" or not, would take Social Security even closer to being purely welfare. Harkin seems to think that Americans have been so beaten down lately that we finally at long last have lost all pride and are ready to go on the dole. 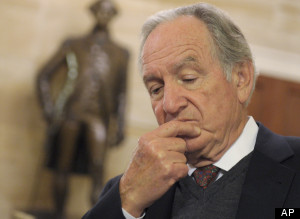 Harkin's bill repeats the mistakes of 1983, as he proposes no "lock box" mechanism to actually capture the increased revenues from removing the cap on taxable income. He wants to go back to the good old days of having an unaccountable slush fund. His bill is so transparently dishonest that no serious lawmaker should give it a moment's thought.

Now that Social Security is cash-flow negative, Congress should change the system so that it operates entirely off of revenue from its dedicated tax: the payroll tax. Such a requirement would put Social Security on a strict cash-flow, pay-as-you-go basis. That change would force Congress to adjust the system to balance benefits with revenue, which is what is supposed to happen when the fraudulent trust fund is "depleted" in 2033. But it should happen now. I'm suggesting making Social Security a separate, closed system. Payroll tax surpluses, if any, would stay with Social Security; they would not be sent to the general fund to be spent on whatever Congress wanted them for.

Congress has "borrowed" and spent the payroll tax surpluses that were put into the Social Security "trust fund." But that fund isn't the only fund that gets fleeced. Indeed, the standard operating procedure of politicians is to shift revenues from dedicated taxes to whatever they "need" the monies for. They do this with revenues from dedicated taxes on tobacco, gambling, gasoline, etc. Then, like Harkin, they come back and propose raising the dedicated taxes because they've somehow mysteriously become inadequate.

But such shenanigans not only occur when dedicated taxes are producing surpluses, they even happen when there's a shortfall. We see this with ObamaCare, which is raiding Medicare by $700 billion, even though Medicare, like Social Security, is cash-flow negative. If Liz Warren cared about retirees she'd be squawking about the raid on Medicare and demanding that it be stopped. But Liz doesn't really care about retirees, especially the retirees of the future. For them, "it's gonna be like slavery."