Valerie Jarrett, Obama's Rasputin, unwittingly provided us an answer to the question of why the Obama Presidency is such a man-caused disaster.

There are few people who are close to the notoriously insular Barack Obama (a former aide, Neera Tanden, said that "Obama doesn't call anyone, and he's not close to almost anyone.  It's stunning that he's in politics, because he really doesn't like people") but Valerie Jarrett is among the select few.   They have been friends for decades; she introduced Barack to Michelle; she is a constant presence in the White House, and highly unusual for a White House aide, enjoys her own Secret Service protective detail.   And when she described Barack Obama as having been "bored to death his whole life" she helped explained what lies behind a failed presidency.

People familiar with Barack Obama's history realize he has a very low threshold for boredom.  This is a trait shared by many millennials: they bore easily, and that character flaw is one reason employers refrain from hiring them.   Yet they feel entitled to promotions as a way for others to display gratitude towards them and to give them an ego booster shot.  They want to be stimulated and entertained all the time and find work tedious and...boring.

When interviewed upon becoming the first black Harvard Law Review President he told the Associated Press, "I'm not interested in the suburbs.  The suburbs bore me"; by inference, suburbanites bore him, as well -- and we know how he feels about small-town Americans).  Ah...to be jaded and judgmental so early in life and to feel free to spout stereotypes.

Upon graduating law school he went to work for a politically-connected Chicago law firm.  But instead of grueling hours spent working on cases or contracts, his colleagues remember him as engaging in less boring and mundane pursuits -- his feet up on his desk, doodling on his memoir on company time.  His fellow associates probably did not appreciate his attitude, but the name partners indulged him -- as one suspects he has been indulged throughout his life.

His boredom continued; he quickly grew bored with his state senate job (after all, voting present and relying on the work of others to make a name for oneself  can induce ennui).  This was a mere steppingstone on the way to greater electoral victory.

He parlayed the state senate job into becoming a United States Senator.  How long did it take for that role to bore him? Not long at all, according to Game Change authors John Heilemann and Mark Halperin who wrote of his attitude towards being a Senator just one year:

The glacial pace, the endless procedural wrangling, the witless posturing and petifoggery, the geriatric cast of characters doddering around the place: all of it drove him nuts.  To one friend in Chicago, Obama complained,

"It is basically the same as Springfield except the average age in Springfield is forty-two and in Washington it's sixty-two.  Other than that, it's the same bullshit".

After listening to Biden during a committee hearing, Obama passed a note to Gibbs that read "Shoot me now".

Time and again after debates on the floor, he would emerge through the chamber's double doors shaking his head, rolling his eyes, using both hands to give the universal symbol for the flapping of gums, sighing wearily, "Yak, yak, yak".

He was angling for a bigger role.

There was a pattern becoming visible: throughout his career, Barack Obama has found work too mundane, too boring to bother spending time on.  He was always looking for the excitement of the next campaign -- to be the star surrounded by adoring crowds and a press eager to sing his praises, a veritable choir.  The only time he seemed to be exerting energy was when he was in front of roaring crowds (his political ascent into the stratosphere began at the 2004 Democratic National Convention, where he delivered a keynote speech that sent the media swooning; he was in his element, boasting that "I'm Lebron, Baby.  I can play on this level.  I got some game".) 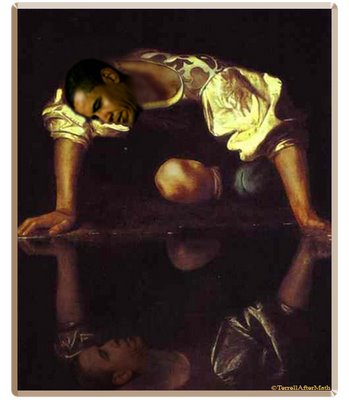 After that display, it was off to the races and what followed was a narcissist's dream (the Denver faux columns, the faux Presidential seal, the faux presidency).

There is a surfeit of examples of Obama's refusal to take his job with any degree of seriousness.

He has repeatedly refused to meet with economic experts, skipped more than half of his daily intelligence briefings, turned his Cabinet (trumpeted by an obedient media in 2009 as a Lincolnesque "Team of Rivals") into a Team of Idolizers that he almost completely ignores -- both as individuals and as a group; and , if one believes his protestations (a big "if") was out of the loop or, as Charles Krauthammer wrote, oblivious to the NSA, IRS, and AP scandals (as well as Benghazi, Fast and Furious, the vendetta against James Rosen at Fox News -- the list is endless).  Of course, the most recent revelation is most revealing: even as he staked his reputation and legacy on his signature "achievement" (he called it his most important initiative) ObamaCare, he reportedly met only once with the official he chose to head the program, Kathleen Sebelius.  Talk about being outside the beltway!  Actually, that is where he can often be found: on the golf courses, on vacations, in front of adoring crowds, or shaking the money tree at glitzy fundraisers in Hollywood -- a natural environment for a faux president.   A President has to set priorities after all.

When Americans were dying in Benghazi, he took the night off to rest for a trip to Las Vegas for a fundraiser to help his re-election efforts; when Americans were engaged in the mission to kill Bin Laden, he went to play cards with his body man.  Those events were boring because they were not about him.

So when he has no clue about the real world (there were no "shovel-ready" jobs despite what he said when he pushed for a stimulus bill; "buying insurance" is  actually complex -- one suspects he has never had to do it) or about the size of the national debt ( a topic of mirth not concern on the Letterman show ; or how taxes work; or how the economy works -- well, math is boring ;  when Paul Ryan revealed how little, if anything, Obama knew about health care reform, entitlements, and the budget, Obama could not even fake a semblance of comprehension (now we know why he does not like news conferences and only appears on fluff shows where he knows he is in a Gotcha Question Free Zone); when he declared that the "private sector is doing fine"; when his advisers discuss the Syrian massacres in front of our Nobel Peace prize-winning President while he blithely ignores them as he spins through his BlackBerry (checking sports scores?) we should no longer be surprised.  All those topics are so boring.

Americans should not be surprised that his decision-making has been reduced to a multiple choice sheet handed to him by his ring of advisers or that he is so slow in making decisions ("leading from behind" -- is there any American President who has proclaimed such a doctrine as a guiding principle?) ; or that he outsources decision-making to Vladimir Putin and the mad mullahs of Iran.  Learning geopolitics --all those funny sounding names, all those groups, all those national security issues, maps, facts-boring.  He outsources the work behind his goal of "fundamentally transforming America" to radicals he appoints and who now have an easy path to confirmation in the wake of Harry Reid's abolishing the venerable filibuster.

Contra to the sycophants who declared him the "smartest president" ever,  or a "sort of  god," he is not omniscient nor is he particularly bright.  However, the flattery and obsequiousness has inflated an already outsized ego.  Why would a god find mere mortals of interest? Obama admitted as much when he declared at a high-powered fundraiser that:

"It is very rare I come to an event where I'm like the fifth or sixth most interesting person.

No wonder he finds no time for experts and advisers but has plenty of time for pickup basketball games with NBA pros, glittering Hollywood celebrities, private concerts in the East Room of the White House.  Everyone and everything else is so...boring.  And he has no tolerance...or is actually rude...to people he finds boring .  When Republicans and others, even donors hoping for a photo op, try to meet with him he considers it an act of lèse-majesté.

If he were interested in becoming a better president he would be forced to actually work, and he has a severe problem with the concept of work when it involves him and (perhaps) welfare recipients, as well He does not understand why businessmen and professionals would find his declaration that they did not "build that" offensive.

But to him work is boring.

He may be good enough for government work.  No wonder he likes Big Government -- where else can someone with his attitude and work ethic rise so high? The administration operates with the efficiency of the DMV, writ large.

After five years of watching a President just going through the motions, Americans have seemingly had their fill.  This is what excessive adulation can do to any celebrity -- especially when Americans realize they have been conned (to add to his election victories, selfies, magazine covers, Grammy, Nobel medal can be added his most recent "win"-the Lie of the year for his "you can keep your doctor" lie), The young have abandoned the man they elected.  There are few things youth can tolerate and one of them is "inauthenticity."  And Obama has that in abundance.  He is, after all, in the words of Jeremiah Wright, Jr., just "a politician."

His poll numbers in five key categories are plummeting.   Young people, so crucial to the success of ObamaCare, are ignoring his pitches to sign up and are tuning him out, as have America's adversaries.

Even Democratic politicians are wary of being connected to him as they face challenging reelection prospects.

He will continue bringing onto his team journalists (and their relatives)  and spinners  to peddle stories, travel through the country to attack Republicans and straw men, and pose false choices before ever-diminishing groups (see the end of Spinal Tap for a preview), have more pivots and fewer divots, but it all amounts to "noise" akin to Peanut's parents, repeating endlessly the same hackneyed phrases streamed to him from teleprompters.

Tens of millions of Americans have muted him -- as Nancy Pelosi so presciently did early in his presidency.  Faux political leaders know one when they see one.

When Obama speaks they are "just words"  and don't matter once they have served their purpose in fooling people -- they can be buried in the "memory hole" as was his faux "red line" regarding use of chemical weapons  or explained away as the fault of Americans failure to understand "nuance" as apologists have been doing regarding his "doc promise".  All clichés, all the time.

They are "empty words" from an empty man.

Obama is bored and so are we.