Warning: mysqli_free_result() expects parameter 1 to be mysqli_result, bool given in /var/www/html/americanthinker/admin/common/functions/func.general.php on line 126
 Finding My Way to the Incarnation - American Thinker
|

Finding My Way to the Incarnation

Ah, it is Christmastime once more in the vast wasteland of the Inland Empire. The bell-ringer at our local Wal-Mart is wearing a t-shirt and shorts as he sings of warm fires and snow-covered rhapsodies in a beautiful baritone -- hoping to persuade the rushed and harried passing by to cough up a bit of Christmas cheer for the less fortunate. But in a rough town teeming with so many who exist on the edge of solvency, his words and presence only seem to stir their guilt, and they steer a wide berth around that large African-American Santa. Oh well, such is Christmas in San Bernardino: a bankrupt city composed of threadbare dreams on an 81 degree afternoon -- A hard luck paradise; the bitter fruit of Progressivism's strong delusion.

At home, the mail lady delivers her bevy of packages and Christmas cards with the world-weariness of one who views Christmas as more work for the same pay. As I open those cards and mull over the same stock generic phrases and the insufferable annual brag letters, how tempted I am to go rogue and drop off the Christmas grid -- to announce that no more will I allow myself to be taken in by the commercial mendacity that has taken something once beautiful and pure and turned it into a squalid abomination. How can one understand Christmas when the very name of Christ has been both de facto and de jure scrubbed clean from this holy day like vile graffiti on our subdivision wall?

But seriously, who am I fooling? I am the classic schizophrenic when it comes to Christmas, although I will probably be the first to deny this in a roomful of friends and relatives. Secretly, I love the season, mostly because of the precious place that my memories take me back to: when Mom and Dad were still in their youthful vigor and my brothers and sisters were at one in both our adoration of them and the glorious Christmas mysteries. What working-class child, growing up in the early 1960s and who was not overly predisposed to a cornucopia of material largesse, could withstand the sheer anticipation of family, gifts, bright lights, and of people who were seemingly happier and just a little bit nicer to one another? Christmas was first bikes and socks, grandfathers, turkey dinners and Charlie Brown. But moreover, its celebration subtly steered our youthful consciousness towards something infinitely more wonderful -- the dawning wisdom that the materiality of Christmas only existed as a way station pointing in the direction of the inexpressible love of God.

It should be no secret why the classic "Superman" story resonates mightily throughout the world's imagination. Is he not the "god" whose wise and loving father sent as an infant to earth, in the guise of a human, to defeat evil on humanity's behalf? But despite its power, even this tale is a pale derivative that leads us to a truth infinitely more profound. Indeed, within the Christian Cosmology, we are told that the triune council of God, existing in the immutable personages of Father, Son, and Spirit, shared within their Beings the reciprocity of love while dwelling in the limitless halls of eternity, long before they set upon their task of creating time, space, matter, and the very universe. And through no necessity other than this overflowing perfect love did they contemplate and bring about the creation of all life, with the jewel of Man as the apex of God's labors. 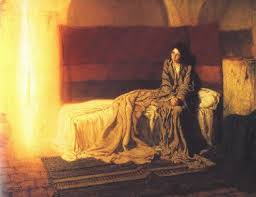 Although we are not privy to the knowledge of other races that might inhabit the vast stretches of space and time, we are informed by revelation that Man was formed from the dust of the ground and blessed with that ineffable spark of God's divine spirit. We are told that Adam spoke face to face with God -- walking with Him in the coolness of the Garden, until his disobedience allowed iniquity to enter in and severed the precious link between Creator and created that arose from the tainted well of his freedom. Man was born to rule, but in striking out on his own with a formidable intellectual reason uncoupled from his irreplaceable source of Wisdom and Light, he tasted bitterly the fruits of his folly. Soon, humanity learned the indignities of servitude and death that arrived by grim necessity through the course of their desire for an ill-considered emancipation. The quality of Libertarian freedom is inseparable from true love; and in order for Men to truly love and thrive in concordance with their design, they require both the free moral capacity for choice and the Divine Wisdom that allows them to distinguish between the sour and the sweet. Having turned away from the latter, man went his own way and found that such a cruel and sterile autonomy meant an inexorable descent into the soul's own terminal sickness unto death.

Left to his own vain intellect, Man, divorced from his only true purpose and joy, stews in a cauldron of inordinate pride and self-worship. In becoming a distorted object of his own wretched obsession, he spins hopelessly into a relentless existential Will to Power, resulting in annihilating despair. But God, having foreseen (not foreordained) the Fall, put into motion that plan of redemption that had been in contemplation even before the foundations of creation. To prove His eternal and abiding love, God the Son would then take the form of his stiff-necked and errant children. Indeed, by relinquishing authority and accepting the indignity of being reduced to the embodiment of a helpless infant, He volunteered to bear in His immaculate Personage the penalty of mankind's rebellion at the terminus of a short, valiant, and afflicted life. 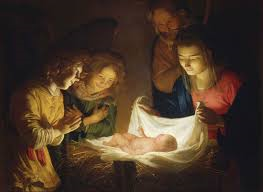 Who amongst us can fathom the greatness of such a sacrifice for the sake of His wayward creation? In becoming the sorrow-laden babe who was born to die, Jesus of Nazareth lived a meager yet noble existence. He was rewarded for His virtues, copious miracles and unparalleled mercy with a brutal scourging and executed with a slow and grisly murderer's death -- taking our place in the cold and silent grave. Which of us truly comprehends the gravity of God's Incarnation on Earth? By the compelling force of boundless love, the magnanimous Lord of All willingly stepped down from His Seat of Power and readily assented to being enclosed in the body of a poor young woman. Through obedient submission to the perfect will of the Father, The Word of God, in the fullness of days, was cradled inside a humble animal's feed box within a stable on the cold and starry night of his birth. Who, amongst all those who would gaze upon this baby's unremarkable earthly countenance, could have known that they were beholding the very Author of Creation -- sent on a divine rescue mission behind enemy lines to counter and vanquish by proxy the horror that men were utterly silent and helpless before?

In conquering death and reconciling the Great Breach, Man was ushered into a new and more wonderful character of being: far surpassing that which had existed even prior to the Fall. By virtue of His sacrificial commission, God sealed Man's undying devotion by winning over those hearts who could now perhaps partially comprehend what lengths He had travelled in order to rescue and redeem. Finally, for those hearing the call who would now assent to the transformation of Spiritual R-birth, they would now as sons and daughters encounter the genuine Heart of God: not as some distant monarch of terror, but as a longsuffering Father welcoming home His prodigal children with a golden ring and a holy kiss.

It is in bringing to mind these wonders and unspeakable joys that Christmas acquires its hallowed position in the Believer's life. In the course of each of our pilgrimages we will be buffeted from every vector by the white noise of sin and suffering, contracting empires, the cares of this world, and wars or the rumors thereof. Nevertheless we are bidden, yea commanded, to foreswear all that is passing before us into rust and to take the Good News of Life, via the medium of our treasured hope, to the outer reaches of the world.

As an oftentimes weak and foolish man, I have been turned away from the carnal waters of Babylon more times than I would care to admit; but finding my way back to the Incarnation of Love itself never ceases to bring tears to my aged and dimming eyes. The sage lecturer S.D. Gordon tells us that: "Jesus is God spelling himself out in language that man can understand." Since I cannot improve upon such crisp eloquence, I will have you know that as I finish writing, the temperature is dipping in Highland to a brisk 62 degrees and our "Santa" has finally donned his long pants and windbreaker as he now croons the mellifluous tones of "O Holy Night." If you take the words of that carol to heart, then you will understand that although men may continue to fail and disappoint and their fragile empires wax and wane, that Great King, who was once such a little child, has changed everything for us. Shall we not sing in unison:

O Holy Night! The stars are brightly shining,
It is the night of the dear Saviour's birth.
Long lay the world in sin and error pining.
Till He appeared and the Spirit felt His worth.
A thrill of hope the weary world rejoices,
For yonder breaks a new and glorious morn.
Fall on your knees! Oh, hear the angel voices!
O night divine, the night when Christ was born.

Glenn Fairman writes from Highland, Ca. He can be reached at arete5000@dslextreme.com. He currently blogs on FB and at www.stubbornthings.org