Warning: mysqli_free_result() expects parameter 1 to be mysqli_result, bool given in /var/www/html/americanthinker/admin/common/functions/func.general.php on line 126
 Does Obama Think He Is Lying? - American Thinker
|

Does Obama Think He Is Lying?

In Michael Agar's book entitled Language Shock: Understanding the Culture of Conversation, he asks "[h]ow do you speak and act a lie at the same time?" Agar maintains that there

are three characteristics of an act that tell ... whether a lie occurred or not: I. The sentence is false; 2. The person knows it's false; 3. The person intends to deceive. A lie isn't just what's in the discourse; it's also what's in the circumstances of the act of speaking, like the knowledge and intentions of the speaker.

Furthermore, "the thing that most people would say makes a lie -- the sentence is false --turns out to be less important than the speaker's knowledge and intentions. The thing that's most important in figuring out whether something's a lie is what the speakers were trying to do, not the literal truth or falsity of the words and sentences that they said."

While Americans are shocked by the apparent misleading misrepresentations in Obamacare, were they actually lied to or did they merely engage in profound self-deception?

Didn't Obama tell us who he was from the beginning? Is he really lying, from his vantage point? He is clearly a product of a socialist/Marxist background. He has vilified capitalism from the outset. He publicly stated that he favors a single-payer health-care system. Is he not fulfilling the total transformation of America as he promised from the outset? Who is lying to whom? Is Obama a palterer who talks deceitfully or is he merely engaging in Barry-speak? After all, if he never intended ObamaCare to be concerned with health care, he is being truthful all along since his end game is the destruction of the American health care system. Does the old adage that a person "can believe anything he puts his mind to," have some truth in it after all? Is Obama, in fact, engaging in a true lie or a truthful lie?

Dodging, evading, hedging the data, and sidestepping questions have been evident in Obama's linguistic assertions from the very beginning. But whose responsibility was it to mine the truth from his mincing of the truth?

Did Obama speak falsely or did too many Americans listen poorly? After all, "the liar is trying to lie successfully and we want to believe [him] so we do. There are no obstacles."

In the natural world, deception is a life-saving exercise. For example, "[t]he Tawny Frogmouth is camouflaged to look like the tree upon which it is perched to deceive its predators and hide itself during the day."

Given Obama's fragmented childhood, has the boy in him who had to protect himself from a loss of his father, a distant mother, and a confused identity, merely evolved into the man who uses protective language coloration to shield himself? Studies show that by five or six years of age, children become quite adept at lying. Could it be that in Obama's universe "not telling the truth is much more complex than just lying, because [one may ask] is there an absolute truth?" After all, this article at Salon manages to avoid the details of ObamaCare when it claims that "No, Obama didn't lie to you about your health care plan."

However, the distinction between deception and lying is an important one. If Obama could be monitored, would he reflect some of the physical changes often associated with lying such as changes in facial expression, slower speech, higher pitch, and/or increased heart rate and respiration?

Then again, the New York Times maintains that Obama merely "misspoke." Commenting on this linguistic waffling, readers have stated that

There are lies, there are damned lies, and there are 'incorrect promises.'

What the hell is an 'incorrect promise'?

My favorite is Michael Graham who writes "George Washington Meets the NY Times." 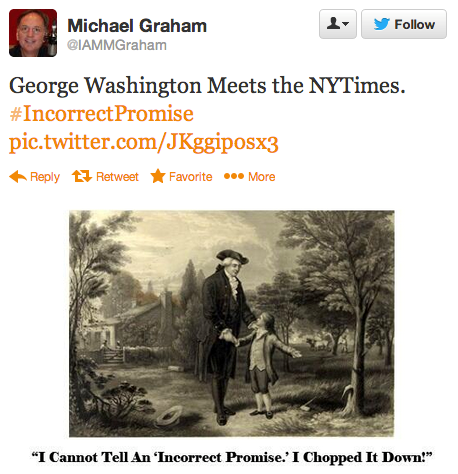 But, of course, "a promise, in and of itself, cannot be considered correct or incorrect, and can only be judged with words like 'false' or 'broken.'" And so the paper of record allows its readers to wander down the rabbit hole of euphemistic pretense.

Another definition of lying is "the conscious alteration of information a person believes to be true in order to significantly change another's perceptions from what the deceiver thought they would be without the alteration." Thus, there are "lies of commission, lies of omission, half-truths, diversionary responses, and collaborative lies." Moreover, "a related kind of "lie"... is to emphasize the positive and avoid mentioning the problems" (Agar 156).

To lie "is the ability to understand another's mind." And here Obama excels. He clearly knows that the reality of his deeds would never have been accepted if the American people clearly understood what the ultimate goals would be. Thus, fibbing, misinforming, distortions, and victimizing, have become the rule of the day.

According to Aldert Jrij, a professor of psychology from the University of Portsmouth, UK, "people are better at detecting the truth than detecting lies." Americans, by nature, are not a suspicious people because that would "destroy the cooperation essential to success as a society." And we have never confronted a Manchurian President before. There is also a historical naiveté that precludes this generation of millennials from understanding that distortions of language are the first manifestation of the obscuring of truth. Consequently, the "Liar's Advantage" is a psychological principle and tactic made possible partly by the difficulty of lie detection and partly by [humans'] own inherent gullibility."

If Obama has managed to "reinforce his version of the truth to himself enough times," he truly believes it. Thus, "there are people who want to believe their lies so much that it does actually become a truth in their reality." Consequently, "this truth -- in [Obama's] own mind and physical brain -- is indiscernible from any other truth or so-called truth in [his] mind and brain." Edward Feser has written that

...one can lie when one knows no one will be deceived. And one can deceive without telling a lie, for example, by speaking evasively or ambiguously.

a 'broad mental reservation' is not a lie. It involves restricting one's meaning in such a way that the average language user could figure out one's true meaning, given the conventions of usage and the circumstances, even if he is not likely to do so.

While Obama claimed that Americans "could keep their health insurance" many chose to ignore the parenthetical "until I, President Obama, decide to change that promise." Instead of recognizing the inherent danger in governmental takeover of the health industry, too many people put their faith in a man they fervently wanted to project all their hopes and desires upon.

But "liars have an advantage only for a while. Truth always wins, in the end." No matter how much Obama and his minions "beat around the bush," prevaricate or warp the information, truth has a way of finally revealing itself -- if only we pay very close attention.

As more light is shed on the massive damage and "unimaginable suffering" of ObamaCare, the American people must speak out. The fabrications are there for all to see and the lying has been exposed. November 2014 will reveal much.