Warning: mysqli_free_result() expects parameter 1 to be mysqli_result, bool given in /var/www/html/americanthinker/admin/common/functions/func.general.php on line 126
 Conservatism and Social Justice - American Thinker
|

Charles Dickens' message to the world is heard loud and clear by many around Christmastime each year, when Scrooge says to Marley's ghost, 'you were a good businessman,' and Marley replies, 'Mankind should have been my business.'

For maybe a week or so, many people take this message to heart. All too soon, however, it's back to the daily grind and the message begins to diminish in importance. By the end of January, for far too many, the message has usually been neatly archived away in the deep recesses of their memory banks.

Dickens wrote A Christmas Carol in 1843, and, as with most of Dickens' works, the novella was a commentary both on human nature and on the times. By 1840 the Industrial Revolution had brought about sweeping cultural and economic changes in England, the U.S., and much of Europe. Life was getting better for the new and growing middle class, but for the working class and the poor, conditions were pretty pathetic, especially in large cities.

It was also right around this time that a conservative Catholic Jesuit priest and scholar named Fr. Luigi Taparelli d'Azeglio was hard at work in Palermo, Italy, writing Saggio teoretico di dritto naturaleappoggiato sul fatto (A Theoretical Treatise on Natural Law Resting on Fact). It's in this massive five-volume work that Taparelli coined the term 'social justice.'

Conservatives/Republicans looking for a counter to the social-justice message of the left might want to consider adopting Taparelli's idea of social justice in 2014.

Like Dickens' story, Taparelli's treatise was a response to the socio-economic changes taking place. Like so many scholars and philosophers before and after him, Taparelli was trying to come up with a solution to the problem of how to create a just society. 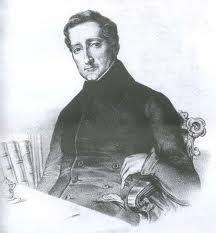 Taparelli's new term was subsequently picked up by more renowned philosophers, economists, and legal scholars, and applied to their own ideas of how best to achieve a just society. According to Thomas Patrick Burke, three different versions of social justice eventually emerged: a conservative version, a classical liberal version, and a socialist version. Unfortunately for conservatives, the socialist version won out over the other two. This is the version -- the redistributive version -- of social justice that forms the basis of Liberation Theology and which is being pushed today by the Left and the current administration.

But Taparelli's version of social justice did not just die an ignoble death. As Burke wrote in an article in the Spring 2010 issue of Modern Age:

Taparelli has a good claim to being the father of Catholic social teaching. One of his students was the Jesuit Matteo Liberatore, who wrote the first draft of Pope Leo XIII's 1891 encyclical, Rerum Novarum (On the Condition of the Working Classes), the first papal statement on "the social question." Leo himself, as we have noted, had been a student of Taparelli's, his collaborator at the Civiltà Cattolica, and seems to have been influenced by him. Pius XI used to recommend the study of Taparelli's works in conversations with his friends and colleagues. One of Liberatore's students was Oswald von Nell-Breuning, S.J., who wrote Pius XI's 1931 encyclical, Quadragesimo Anno, which officially adopted "social justice" as part of Catholic doctrine . . .

What differentiates Taparelli's concept of social justice from the socialist version is that Taparelli says, in effect, in order to achieve a just society we must first accept the idea that all men are not equal in terms of skills, intelligence, physical traits, motivation, character, etc. In other words, in every society both equality, as in equal rights, and inequality, as in abilities, will always exist side by side. The trick is in figuring out how to deal with this truth.

This thinking is clearly in evidence in Catholic social teaching. The Catechism of the Catholic Church states in Part Three, Chapter 2, Article III:

1928 Society ensures social justice when it provides the conditions that allow associations or individuals to obtain what is their due, according to their nature and their vocation. Social justice is linked to the common good and the exercise of authority. (Emphasis added.)

Since, however, the Catholic Church does not see its role as a technical one, it leaves it up to society to put in place the socioeconomic systems that best fit its needs. The Church's primary concern is that whatever system is adapted should serve the common good.

As The Compendium of the Social Doctrine of the Church, says:

164. The principle of the common good, to which every aspect of social life must be related if it is to attain its fullest meaning, stems from the dignity, unity and equality of all people. According to its primary and broadly accepted sense, the common good indicates "the sum total of social conditions which allow people, either as groups or as individuals, to reach their fulfilment more fully and more easily". [346]

Luckily for conservatives, the Luigi Taparelli story did not end once he coined the new term. While the Catholic Church does not see its role as a technical one, Taparelli nonetheless took a shot at describing what he felt was an economic system that would help bring about a more just society.

Taparelli's ideal economic system injected morality into economics. He posited that a wide open, laissez-fare type of economy would inevitably result in unbridled competition, which would end up being more harmful than helpful to society. On the other hand, an economy governed by honor, honesty, virtue, and sound moral principles would be more likely to benefit the common good.

The principle of subsidiarity says that social programs should be undertaken at the lowest possible level of society. In effect, this means social welfare and charity need to take place at a community level -- where local businesses, associations, and organizations would know best how to help the community -- people helping people, not the state (i.e., the federal government) helping people.

By intervening directly and depriving society of its responsibility, the social assistance state leads to a loss of human energies and an inordinate increase of public agencies, which are dominated more by bureaucratic ways of thinking than by concern for serving their clients, and which are accompanied by an enormous increase in spending. In fact, it would appear that needs are best understood and satisfied by people who are closest to them and who act as neighbors to those in need.

There is one caution in regard to jumping on the Taparelli bandwagon. Luigi had a problem with the constitutional form of government. But since no one is perfect, perhaps this one peccadillo can be forgiven.

Pope Francis, also a Jesuit, is undoubtedly familiar with the writings of fellow Jesuits Taparelli and Breuning, just as he is no doubt very familiar past Papal Encyclicals and Catholic Social Doctrine. It's possible that his Joy of the Gospel message was a gift to Republicans for 2014. One can only hope that those misguided conservatives who were so quick to criticize Francis due to their lack of knowledge about Catholic Social Doctrine, didn't offend a potentially valuable ally. But then again, Francis has probably already forgiven them.