China's December 15th soft-landing of an unmanned spacecraft on the moon was celebrated by the Xinhua news agency as, "The dream for lunar exploration once again lights up the China Dream." China's neighbors saw the action as a nightmare demonstration of China's ability to launch a Multiple Reentry Vehicle ballistic missile, whose payload can deploy multiple nuclear warheads aimed to hit a group of targets. China's provocative moves are creating a muscular arms race in Asia.

The Carnegie Endowment for International Peace published a major report last May arguing China would be a "coercive power" in enforcement of its way with Japan, but emphasized that economic interdependence with the United States and the rest of Asia would prevent a major Cold-War style confrontation with China in the region. Carnegie claimed that despite hawkish rhetoric from Japan's new Prime Minister Shinzo Abe, Japan's economic troubles and political paralysis would prevent it from countering China's increasing military capabilities. Carnegie obviously failed to consider Japan's last two decades of increasing militarization. When it comes to intimidation, Japan and an increasing number of Asian nations will aggressively confront China. 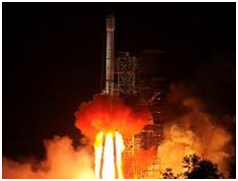 As I reported on December 3rd in "Energy Drives Asian Military Confrontation," China and other Asian export economies are at risk of losing tens of millions of manufacturing jobs due to America's huge advantage in energy cost from fracking more than offsetting Asia's traditional labor cost advantage. China announced last month that it would begin enforcing an expanded offshore Air Defense Identification Zone (ADIZ) as sovereign territory that would capture the disputed oil-rich Diaoyu/Senkaku Islands in the East China Sea and overlap Japan's, South Korea, Taiwan's, the Philippines, and Vietnam's current ADIZs. Since November 29th, the Japanese have sent daily flights of F-15s, E-767s, and P-3s to provocatively challenge the People's Liberation Army Air Force Su-30 and J-11 warplanes in a high-tech game of chicken.

Japan is a country with almost a complete lack of natural resources which must have secure regional sea-lanes to feed its export industry. Japan imports 82% percent of its energy supply, even when the nation was operated fifty domestic nuclear power plants. Japan depends on the Middle East and Southeast Asia for more than 90% of its oil and natural gas imports, leaving it vulnerable to political instability in both regions. Japan's dependency on imports also extends to raw materials, such as copper and zinc.

The two nations have historically been bitter rivals and China's rise as a great power was bound to ignite military competition with Japan. Imperial China forced Japan to pay tribute for a thousand years beginning in the 5th century. But as part of Japan's rise in the 19th Century, they invaded the Korean Peninsula several times and committed gruesome atrocities during their World War II invasion of China. In the postwar period from 1946 to 1973, Japan grew by an incredible 8% compounded while communist China could not even feed its people. But since 1987, it has been China growing at 8% and Japan with no virtually growth.

The Japanese Constitution forbids maintain a military except for self-defense. But the Abe Administration is seeking to amend the constitution to allow offensive operations and military planners in Tokyo have been ignoring the prohibitive language for decades. The quasi-pacifism is long gone, and the "active pacifism" proclaimed by the ruling Abe's Liberal Democrats amounts to a global declaration of full military normalization.

Japan already has approximately four times as many major warships as the British Navy and more tanks than Germany. Despite being an island nation that emphasizes sea and air power, Japan has trained special forces, a fleet of sophisticated diesel-electric submarines, and is working with the U.S. Marines on amphibious capabilities.

To supposedly counter North Korea's nuclear weapons and missile programs, Tokyo deployed a $12 billion missile defense system that includes land-based Patriot Advanced Capability-3 interceptors and SM-3 equipped-Aegis destroyers on mainland Japan, Okinawa, and island bases in the Sea of Japan and the East China Sea. Japan's real military focus is being capable of effectively confronting China over the sovereignty of the Senkaku Islands (called Diaoyu in China) and its huge offshore oil reserves.

Because Asian countries have little common ethnicity, nations in the region have independently ploughed money into weapons. The United States provided the stabilizing force in the region for the past sixty years, but these nations are acutely aware that America military power may not be a reliable force in the future.

Recognizing that China's rapid development of ballistic missiles, warships, submarines, and advanced fighter jets concentrated along its Pacific coastline is intended to overwhelm America's regional naval dominance, the U.S. agreed to a $4.7 billion contract to sell Tokyo its Lockheed-Martin's F-35 Lightning II next-generation jet fighter. Japanese firms will participate in building the jets and gain access to some of America's top-secret stealth technologies. The goal is to strengthen the Japanese air force as a buffer against China's territorial expansion.

Most nations in Asia have opposed a renewal of Japanese nationalism and a military buildup as an existential threat. But the moon landing and threats to free passage through international waters is being seen as intentional demonstrations of "coercive power" by China. South Korea, the Philippines, Taiwan, and Vietnam are rapidly militarizing to defend their economic interests and considering aligning with the Japanese to form a united force to confront China's ambitions.