Warning: mysqli_free_result() expects parameter 1 to be mysqli_result, bool given in /var/www/html/americanthinker/admin/common/functions/func.general.php on line 126
 After Obamacare, ObamaHaus Insurance? - American Thinker
|

With the mounting successes of ObamaCare, it's time to anticipate the next federal frontier of statist intervention. The home insurance market - ObamaHaus Insurance. 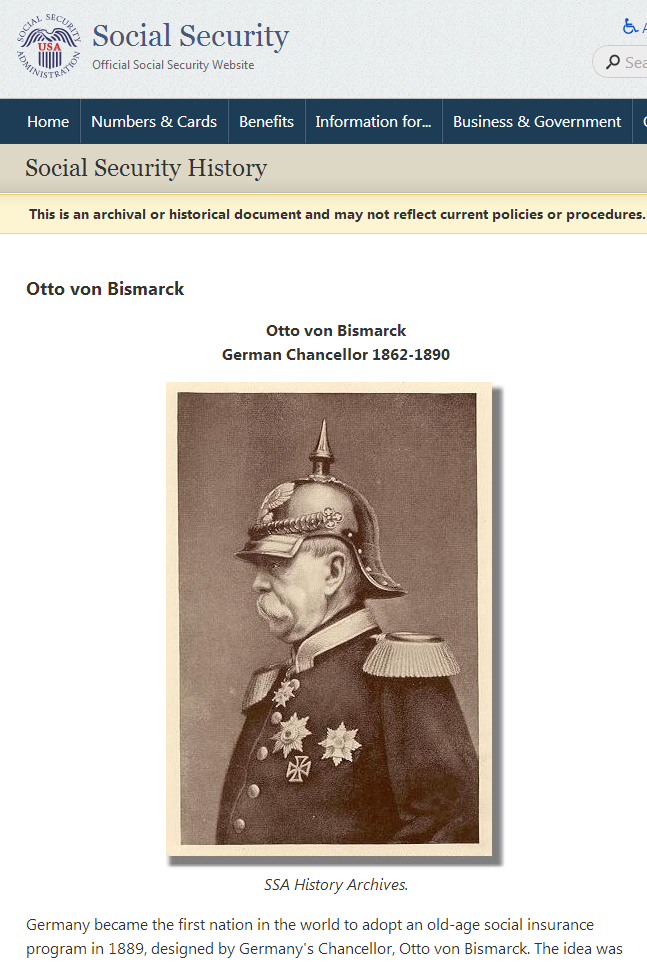 The copy reads, in part:

"Germany became the first nation in the world to adopt an old-age social insurance program in 1889, designed by Germany's Chancellor, Otto von Bismarck. The idea was first put forward, at Bismarck's behest, in 1881 by Germany's Emperor, William the First, in a ground-breaking letter to the German Parliament. William wrote: ". . .those who are disabled from work by age and invalidity have a well-grounded claim to care from the state."

Bismarck was motivated to introduce social insurance in Germany both in order to promote the well-being of workers in order to keep the German economy operating at maximum efficiency, and to stave-off calls for more radical socialist alternatives. Despite his impeccable right-wing credentials, Bismarck would be called a socialist for introducing these programs, as would President Roosevelt 70 years later. In his own speech to the Reichstag during the 1881 debates, Bismarck would reply: 'Call it socialism or whatever you like. It is the same to me.'"

According to the SSA, Otto, with "his impeccable right-wing credentials," was practically the founder of the Tea Party movement. But in 1891, in his book "Bismarck And State Socialism: An exposition of the social and economic legislation of Germany since 1870, William Harbutt Dawson identified the "principle characteristic" of Bismarck's state socialistic era: "From first to last it is a protest against Individualism, against Laissez-faire." (p. 28)

Back to ObamaHaus.  Here's how it evolves.

First, two, historic, national, tripartite mottos merge into hybrid: The French Liberté, Egalité, Fraternité (rendered as liberty, equality, and fraternity or brotherhood) and the 20th Century American progressive fundamental transformation of "life, liberty and the pursuit of happiness" where "happiness" becomes an unalienable right that includes, but is not limited to, the right to healthcare, education, housing, food, employment, birth control (condoms and drugs), birth termination (abortion), transportation, and telephonic communication (Obamaphone), which enables the right to a selfie.

"Egalité" is the stated progressive motive for vast social engineering initiatives. It's all about the equality of fairness, or vise versa.

So, the first step to ObamaHaus is to establish the motive: Egalité.

Second, established insurance law will be repealed, replaced, or just simply ignored. It's an easy fix. Existing law merely represents the threshold of opportunity to the progressive movement - particularly when adjudicated by the John Roberts' Court.

In 1869, the Court ruled in Paul v. Virginia that the issuance of an insurance policy was not a transaction of commerce and, thus, did not fall within the purview of federal legislation.

Then, a SCOTUS decision in United States v. South-Eastern Underwriters Association, delivered the day before D-Day, June 5, 1944, held that the Sherman Antitrust Act (1890) applied to insurance companies because they transact business across state lines and are, therefore, subject to regulation by Congress under the Commerce Clause.

A year later, Congress retaliated with the McCarran-Ferguson Act of 1945 which "gives states the authority to regulate the business of insurance without interference from federal regulation, unless federal law specifically provides otherwise." Furthermore, the act provided that the "business of insurance, and every person engaged therein, shall be subject to the laws of the several States which relate to the regulation or taxation of such business."

Hence, the protracted debate over the federal government's control of the insurance industry v. the regulatory role of the states has been in play for nearly 150 years.

One potential move toward ObamaHaus, the National Insurance Act of 2006, was sponsored in the U.S. Senate by an alleged conservative Republican Senator and former Maine Governor John Sanunu. It failed in its aim to:

If ObamaHaus already had an entrenched "Commissioner of National Insurance," as Sanunu proposed, its pathway to a single-payer system would be easy.

But, the second hurdle for ObamaHaus, circumventing existing laws, is easily overcome when advancing the public welfare is the progressives' public motive.

Third, integrate the Bonnie & Clyde of home mortgages, Fannie Mae and Freddie Mac, into the ObamaHaus scheme.  Fannie and Fred already own most of the nation's home mortgages, and are well-equipped by their history of fiscal wizardry to be the sole underwriters for ObamaHaus home insurance policies.

HUD, working through the GSE pair, is the logical host agency for ObamaHaus (AKA: National Home Insurance Program, or NHIP). HUD would play a role analogous to that of the Federal Emergency Management Agency's (FEMA) oversight of the National Flood Insurance Program (NFIP).  Imagine a video touting the benefits of NHIP modeled after this video about the NFIP.  It's a beautiful thing to contemplate.

Former North Carolina Democrat Congressman Mel Watt, the regime's currently stalled nominee for chief of the Federal Housing Finance Agency (FHFA), is the logical choice to become Commissioner of the National Home Insurance Program (NHIP).  Referring to Watt's nomination to head up FHFA, U.S. Senator Elizabeth Warren D-Mass said, "Mel Watt is the right man for the job. When it comes to housing, Congressman Watt has seen it all, and Congressman Watt has shown good judgment throughout it all."

It's hard to argue with Senator Warren's assessment.  Watt has no experience as any kind of a regulator. Plus, he supports low down payments, low underwriting standards, principal write-downs, and is an affordable housing advocate and legislator. He's perfect for any big job pertaining to housing where the intent is to inflate another housing bubble.

To incentivize low income home owners and renters to purchase ObamaHaus Insurance policies, the NHIP ("N-Hip" to the hip) will provide subsidies to those unable to pay their premiums, waive any requirement that participants provide proof of citizenship, and artificially elevate the rates for Millennial renters -- most of whom can't afford first-time homes -- so as to counterbalance lower insurance rates for the elderly who will become increasingly hard-pressed after reduced Social Security and Medicare payments.

NHIP premiums for jobless renters who have used up their unemployment benefits will be fully subsidized by the federals. That's just Egalité.

In an effort to encourage movement into dense metropolitan areas -- Manhattanization -- the federal government will encourage Millennials to bolster the ranks of urbanistas in order to stunt further expansion of the suburbs. As an added benefit, both bipeds, as well as quadrupeds, are easier to control when herded together in a confined space.

With the ObamaCare Navigators as the model, ObamaHaus will be rely on "Expeditors" to enroll home dwellers (anyone living under a mortgaged or rented roof) by repeating the promise that they can keep their old home/property insurance policy and even their insurance agent -- that is, if they're willing to pay more (hat tip to Ezekiel Emmanuel).

Lastly, all that remains to rollout ObamaHaus Insurance are the various promotional elements. They include, but are certainly not limited to:

A public endorsement by former Secretary of State and retired Army General Colin Powell stating that ObamaHaus will lead to a more desirable single-payer system. In a statement similar to one Powell recently made about ObamaCare, he will say, "I am not an expert in home insurance, or ObamaHaus, or the National Home Insurance Act, or however you choose to describe it, but I do know this: I have benefited from that kind of home insurance in my 55 years of public life."

A music video patterned after "The Cardigans and Tom Jones: Burning Down the House" will feature Tom Jones (for the seniors) and a nearly unclad Miley Cyrus (for the Millennials).  The tag line: "If your house burns down, you're fully covered with ObamaHaus, because we're all in this Fraternité together."

And, as for the ObamaHaus motto: Superimposed over the White House logo mounted behind the lectern in the national press briefing room will be the words - "Su casa es mi casa."