To refute the Arab lie that Israel is somehow a conspiracy of Jews who took over the Western world and its policies for their own service, it is good from time to time to remember that it was Christians, across all spectrums of Christianity, who encouraged the Jews to repatriate themselves. Yes -- Christians. In our secular age, where Christianity is discouraged in the public square, this necessary history is forgotten.

In 1799, during the French Mideast Campaign, Napoleon Bonaparte, had this decree issued from his military headquarters at Acre, in what is now Israel.

The great nation [France] which does not trade in men and countries as did those which sold your ancestors unto all people (Joel,4,6) herewith calls on you not indeed to conquer your patrimony ; nay, only to take over that which has been conquered and, with that nation's warranty and support, to remain master of it to maintain it against all comers. -- Bonaparte's Proclamation

One hundred and eighteen years before the Balfour Declaration, Napoleon decided to 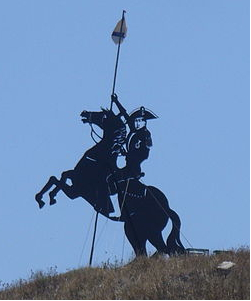 restore the Jews as the "Rightful heirs of Palestine!" Overall, Napoleon was rather friendly to Jewry -- not always -- and he is fondly remembered by them for emancipating them from ghettoes. For this Napoleon earned the criticism of Roman Catholic, Lutheran, and Eastern Orthodox Christian authorities.

What is most interesting is that this appeal to the bible came from Revolutionary Secular France. In fact, the date of the proclamation is the 1 Floreal, which stems from the de-Christianized French Revolutionary Calendar in use at that time. Still, Christianity and biblical history had enough of an appeal for Napoleon to issue the decree.

Overlooking Acre, Israel is a statue of Napoleon on Napoleon Hill, in honor of the battle of Acre. Had he won, Israel might have started a century earlier. In fact, statues of Napoleon are found throughout Israel.

This could be dismissed as a one-time-only quirk, but starting in the 1860s, a German group, chiefly pietist Lutheran, the German Temple Society, called Templers, had the rather bizarre idea that the Lord was calling them to prepare for the Lord's Second Coming by preparing the land in Israel for returning Jews. For this amazing insight they were excommunicated as heretics by the Lutheran Church in Württemberg, though some other Protestant denominations would later accept them.

Called "Deutscher Tempel" by its founders, their aim was to promote spiritual cooperation to advance the rebuilding of the Temple in the Holy Land, Palestine, in the belief that this foundation will promote the second coming of Christ.

The Temple Society built their first colony in Palestine -- as it was called at the time -- in 1868. They eventually set up colonies in Jerusalem, Haifa, and Jaffa. They constructed roads, established coach service, and were the first to use the "Jaffa Orange" label. All of this was started a decade before the first Jewish Aliyah to Israel.

To this day, some of the ritzier sections of Jerusalem, Haifa, and Tel Aviv-Yafo (Jaffa) have what the locals call German colony neighborhoods where the Templers tried to replicate German-style housing in Palestine. The Jaffa Colony was also affiliated with American Restorationist Protestants. Today the Jaffa neighborhood is called the American-German Colony.

The history of the German Temple Society is tainted. It was instrumental in preparing the land; and setting up the structures of civilization which would be instrumental for later Jewish arrivals. At one point the German Templers numbered over 2,000. During WW I, some of the Germans were interred after the British conquered the area in 1917. It is in the 1930s that the third-generation of Templers lost some of their fire. About one in six Templers became Nazis, mostly the young who had German citizenship, and who had abandoned their religious heritage. The older Templers were horrified. These elders were opposed to Nazism.

Some German Gentiles from Palestine pleaded with the Reich's government to drop its plan to boycott shops of Jewish Germans on April 1, 1933

The upshot was that Palestine had a Nazi party during the 30s. It permanently tarnished the Templers' otherwise splendid reputation. After the war, their property was seized, though the Germans were reimbursed.

In England, the preacher John Nelson Darby popularized dispensational doctrine and brought it to the United States during his visits. Central to the doctrine was the belief in the restoration of the Jewish people and the rejection of over a thousand years of Mainline Church doctrine which relegated the Jews to a people discarded by the deity for the rejection of His Son.

In America, William Eugene Blackstone managed to persuaded influential citizens across the United States to circulate a petition:

"Why shall not the powers which under the treaty of Berlin, in 1878, gave Bulgaria to the Bulgarians and Servia to the Servians now give Palestine back to the Jews? These provinces, as well as Roumania, Montenegro, and Greece, were wrested from the Turks and given to their natural owners. Does not Palestine as rightfully belong to the Jews?"

The petition was signed by some of society's notables and presented to President Harrison in 1891.

Working with feverish energy, Reverend Blackstone assembled a memorial to President Harrison. The memorial was signed by 413 prominent Americans, business leaders such as J.P. Morgan, John Rockefeller, prominent Congressional leaders including William McKinley (the later American President), Thomas Reed Speaker of the House of Representatives, religious leaders, Christian and Jewish, editors and publishers of Major American print media and even the Chief Justice of U.S. Supreme Court Melville Fuller. The Memorial called for American support in concert with the world community for the creation of a humanitarian solution to the Jewish suffering in Russia. His solution, permit the Jews to return to Palestine. The Memorial was formally presented to President Harrison March 5, 1891. The Memorial was major American news for weeks. The complete text was printed in the Chicago Tribune. -- Reverend William E. Blackstone (doc)

Blackstone's petition pre-dated Herzl. In fact, some Jews consider Blackstone the founder of Modern Zionism, not Herzl. Blackstone even sent Herzl a bible with prominent verses spelled out to persuade the Zionist movement to reject Britain's offer of Uganda, and to insist on Palestine.

There were others, of course. Dwight Moody pushed dispensationalism, for example. All of this before the Balfour Declaration.

So what do we see?

Contrary to Arab claims of a Jewish conspiracy, none of these men were Jewish.

In fact, almost all of Zionism started out as a Christian enterprise. From the secular nominal Catholic Napoleon Bonaparte, to the German Lutheran Templers, to the semi-wacky American followers of George Adams, to the Anglican-Brethren English Darby, to the American Methodist Blackstone, to the non-denominational Dwight Moody in Chicago.

These movements presaged Zionism in the Jewish community, and some Jewish historians concede the point. The Templers, in particular, seem almost divinely inspired in their development of Palestine in anticipation of a Jewish return. That some of the great-grandchildren later became Nazis is a morality play of tragic repercussions. Some of their descendents are now in Australia, and run a wonderful website with amazing history.

The Arab narrative about Zionism being a Jewish plot is false.

Mike Konrad is the pen name of an American who is neither Jewish, Latin, nor Arab. He runs a website, http://latinarabia.com/, where he discusses the subculture of Arabs in Latin America. He wishes his Spanish were better.