Warning: mysqli_free_result() expects parameter 1 to be mysqli_result, bool given in /var/www/html/americanthinker/admin/common/functions/func.general.php on line 126
 The Source of Assad's Staying Power - American Thinker
|

The Source of Assad's Staying Power

When Basil Assad, oldest son and heir apparent to the late President Hafez Assad, was killed in a car accident in 1994, the father turned to his inexperienced son Bashar to groom him for the presidency. Whereas Basil was trained in military and political affairs and the workings of the state, Bashar was studying ophthalmology in England and showed little promise that he could embrace the operative skills in domestic and foreign affairs of his shrewd father.

I was told by top Syrian officials, who are still in positions of power, that the elder Assad wanted to leave nothing to chance. He reduced his political philosophy to seven principles (which he drilled in his son's mind) to safeguard the security and stability of the state and ensure the continuity of the Assad dynasty.

First, Syria must maintain and further strengthen ties with its allies, emphasizing in particular the importance of the financial support of Iran, Russia's military supplies, and the political backing of both. Hafez Assad wanted to ensure that Iran and Russia realize that their national interests will depend on the longevity of the president and the Alawite sect.

Thus, they will do everything in their power to stand behind the regime because no other government would allow them to exercise the same influence in Syria, which explains Iran's and Russia's unmitigated support of Assad.

Second, Syria must safeguard its role among the Arab states as the champion of Arab nationalism by remaining true to the Palestinian cause, taking a leading role in Arab affairs, and obscuring its own dependence on outside powers.

That was and remains the mantra of the Syrian Ba'ath party and military elite, believing they will sooner than later recover from the horrific civil war and restore Syria's central role in Arab politics. They demonstrate their confidence and resiliency by their unwavering stand against the rebels and defiance of the international community.

Third, Syria should not provoke Israel, but should fully adhere to the 1974 disengagement agreement and avoid any military confrontation. Otherwise, Syria may well sustain another humiliating defeat akin to the 1973 war. Conversely, Syria should explore opportunities for peace (which it did in 2000 and 2008/2009) but should never relinquish one inch of Syrian territory in exchange.

This explains Assad's unwillingness to retaliate even though Israel conducted five attacks in 2013 alone on Syrian targets and convoys hauling sophisticated rockets to Hizb'allah in Lebanon.

Fourth, Syria must maintain a dominant role in Lebanon and continue to support Hizb'allah as the conduit serving its strategic interests. Hizb'allah should act as Damascus' proxy against Israel and remain a potent force to compel Jerusalem to allocate significant resources to protect its northern border. 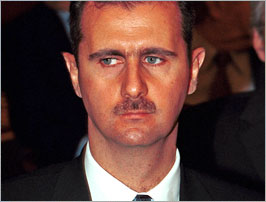 Hezb'allah should depend on Syria for political and logistical support to ensure that Damascus will always be in a position to influence its leadership and use it as a supporter or spoiler in or outside Lebanon, depending on the prevailing circumstances.

Fifth, being that Syria consists of several sects (including the Christians, Kurds, Sunnis, Druze, Assyrians, Turks, and Armenians), the country's interests will be best served by tacitly playing one sect against another while sparing the Alawites.

Whereas the Sunni majority should particularly be subdued politically and generally denied positions of power, the other relatively large sects (especially the Christians, Kurds, and Druze) should enjoy cultural freedom to satisfy their needs and ensure their support of the regime, which explains their unwillingness to join the rebels.

Sixth, to ensure greater loyalty, the president should select nearly all the party elite, military high command, internal security, and intelligence services from the Alawites as they can be relied on to sustain the power base for the government. They should be lavished with material comfort but must always remain dependent on the president's good graces.

Seventh, whereas the president should appear to be a "benevolent" leader, he must never tolerate any challenge to the regime and must crush any uprising against it. The massacre of nearly 15,000 civilians in the wake of a Muslim Brotherhood uprising against the regime in Hama warned any political group or clan from challenging the president's authority.

President Hafez Assad did not anticipate the revolutionary wave sweeping the region in the wake of the Arab Spring. His doctrine of governing, however, remained the same, to which Bashar Assad has almost fully adhered. This should have given the U.S. enough clues from which to discern how Assad will govern and how he might react to unfolding events.

Upon assuming the presidency, Bashar Assad was initially inclined to institute some political reforms. He was stopped, however, by his "big guns" from the military and internal security who firmly opposed any serious reforms, arguing that 'the more you give, the more they [the people] will want.'

Following the violent suppression of the peaceful demonstration in Daraa, Assad wanted to offer some minor concessions to prevent further bloodshed; again he was advised not to take any step that would be seen as a weakness. The crackdown continued unabated, creating the vicious cycle that led to the unfolding tragic civil war which has permanently changed Syria's future.

The question is, how could the Obama administration be oblivious to the most obvious political underpinnings of the Assad regime?

Unfortunately, the White House never really understood the source of Assad's staying power and ignored the operative doctrine which was passed meticulously from father to son.

The administration has badly underestimated Iran's determination to support Assad to the last Syrian soldier and that Russia will never abandon its only ally in the region.

Obama's national security team did not understand the fragile nature of the sectarian composition of the Syrian population and that a long civil war will inevitably lead to the disintegration of the country.

More depressingly, the White House failed to grasp that even if the removal of Assad from power was possible, it would not be enough because the main obstacle is the governing apparatus which is fighting for its life and will do so to the bitter end.

Furthermore, the U.S. intelligence community failed to assess how the rebels (including foreign radical Islamists) would mushroom as a result of the prolonged conflict, why the Sunni Arab states will not accept any solution that would deprive them from playing an important role in Syria's future, and why Assad's survival is central to Hezb'allah's own.

The Obama administration is still floundering in its pursuit of an elusive political solution in its efforts to convene the Geneva II conference, which is not likely to be held. The rebels refuse to take part unless Assad steps down and Iran is excluded, and Assad made his government's participation conditional upon ending all outside support to the rebels.

In addition, whereas the U.S. opposes Iran's participation, Russia feels that given Tehran's deep interest in Syria, its presence at the conference becomes critical to enhance the prospect of a lasting solution.

The irony is that even if the conference is held, there is no solution that could possibly satisfy all the stakeholders in the outcome of the conflict, including the assortment of rebel groups who do not see eye to eye, Iran, Saudi Arabia, Russia, the U.S., Turkey, and other nations bordering Syria.

Meanwhile, as long as the destruction of chemical weapons is underway, Obama is not likely to act while the number of casualties killed by conventional weapon continues to escalate. It has now exceeded 120,000 with more than 4,000 slaughtered each month and thousands of children dying from malnutrition and lack of medical care.

In addition, thus far 30 percent of the Syrian population (nearly seven million) have become refugees or internally displaced while the international community stands idle in the face of the unfolding calamity.

If there was even a slim chance of ending this horrific civil war in Syria, the balance of forces on the ground between the rebels and government must dramatically and immediately change, which only the U.S. can bring about.

The lack of American leadership allowed Russian President Putin to seize the leading role while demonstrating his reliability as an ally, placing Russia in a position that may well determine Syria's future on his own terms.

The tragedy that has befallen the Syrian people demonstrates the horror that the lack of American leadership could precipitate. The Obama administration failed to understand the nature of the Assad regime and its predictable conduct.

Like it or not, the United States remains the anchor of global stability and when any American administration demonstrates a lack of vision and the strategy to stem major conflicts before they spin out of control, they are bound to lead to dire consequences.