Warning: mysqli_free_result() expects parameter 1 to be mysqli_result, bool given in /var/www/html/americanthinker/admin/common/functions/func.general.php on line 126
 The Mess of International Health Care Cost Datasets - American Thinker
|

When the real per-capita health care cost trends are compared between the CEA and OECD reports, as well as the World Bank and World Health Organization (WHO) health care expenditure online databases, it appears we have a mess on our hands.

Health care spending growth is the lowest on record. According to the most recent projections, real per capita health care spending has grown at an estimated average  annual rate of just 1.3 percent over the three years since 2010. This is the lowest rate on record for any three-year period and less than one-third the long-term historical average stretching back to 1965 ... Over the three years since 2010, the real per capita annual growth rate of national health expenditures is just 1.3 percent, less than one-third of the long-term historical average growth rate of 4.5 percent and substantially below the average growth rates recorded from 2000-2007 and over the three years immediately prior. 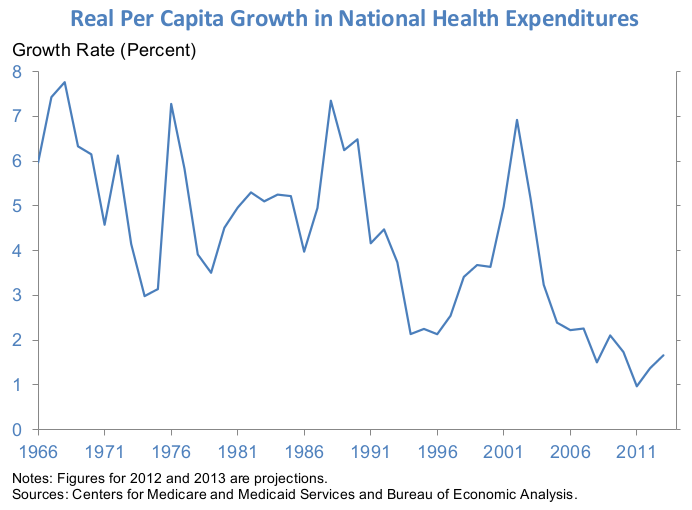 Of note, the 2012 and 2013 data the CEA apparently employs in the figure above are "projections," not finalized audited values.

In an American Thinker article from late August, I provided the following graph of "real per capita health care spending" growth rates from 1995 to the present.  This data is from the World Bank database under the indicator "Health expenditure per capita, PPP [purchasing power parity] (constant 2005 international $)."  The latest year for which health care spending data has been published is 2011, and the World Bank dataset starts in 1995.  Note that "[a]n international dollar has the same purchasing power over GDP as the U.S. dollar has in the United States." 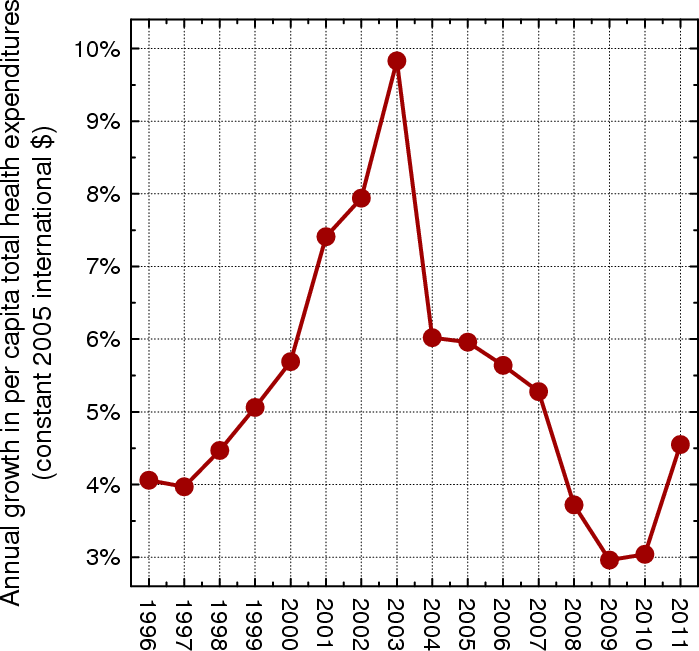 Since the World Bank is claiming that this dataset is already in "constant" dollars, inflation should already be accounted for (i.e., by definition, the percent change for a financial variable in "constant" terms is also its change in "real" dollars).  More importantly, if we multiply the World Bank's data for "GDP per capita, PPP (constant 2005 international $)" by the World Bank's data for "Health expenditure, total (% of GDP)," we should get the exact same data that the World Bank publishes for "Health expenditure per capita, PPP (constant 2005 international $)."

But we don't.  Instead, we get the following "real per capita health care spending" growth rates from 1995 to the present. 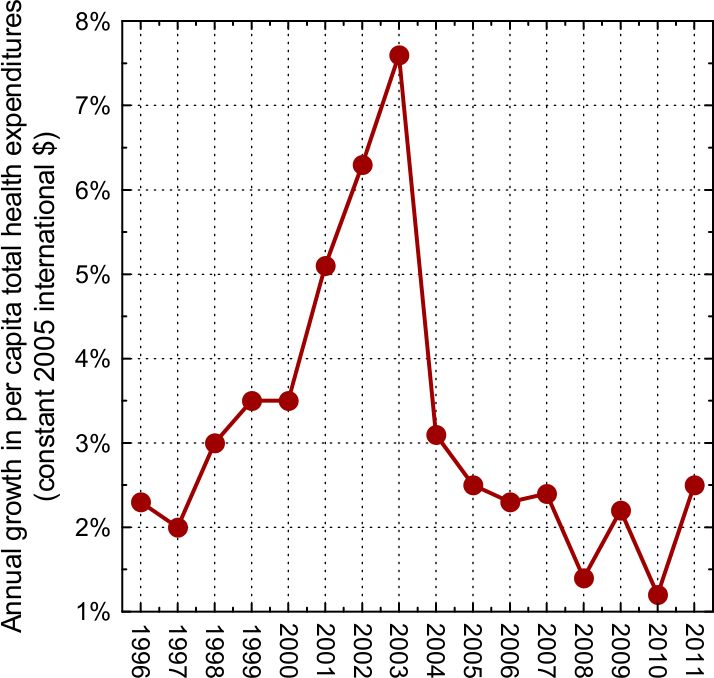 As far as I can tell, this is a major error on the World Bank's part that has apparently gone unnoticed until now.  But even after attempting to fix the error by using the correct underlying World Bank datasets, the White House CEA data still cannot be reproduced.

Then comes the OECD's latest report.  Again, its most current data for health expenditures is 2011.  The OECD published the following chart showing per-capita health expenditures in "USD PPPs" (i.e., international dollars) for 2011 (or the nearest year the OECD claims is available). 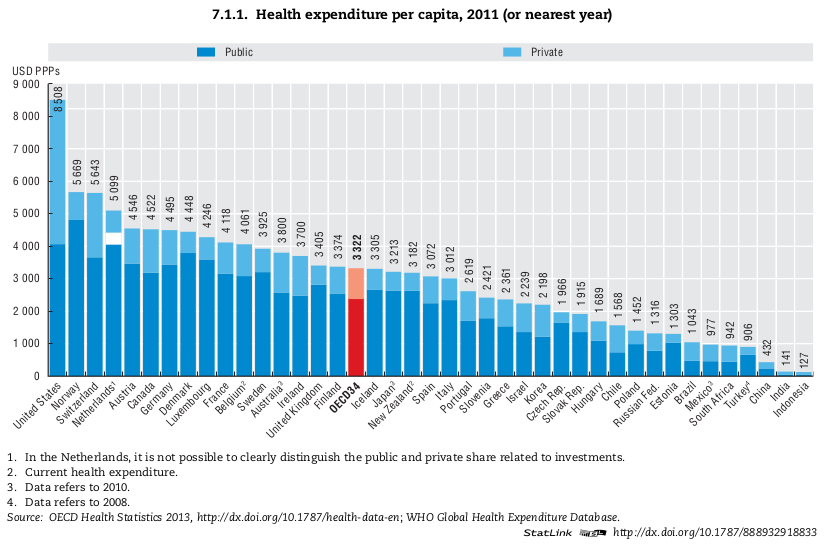 After implying that the latest health expenditure data available for Australia, Japan, and Mexico is 2010, the OECD then proceeds to show the following chart of "[a]nnual average growth rate in per capita health expenditure, real terms, 2000 to 2011 (or nearest year)" in rank order by country for the 2009-2011 average annual growth rate. 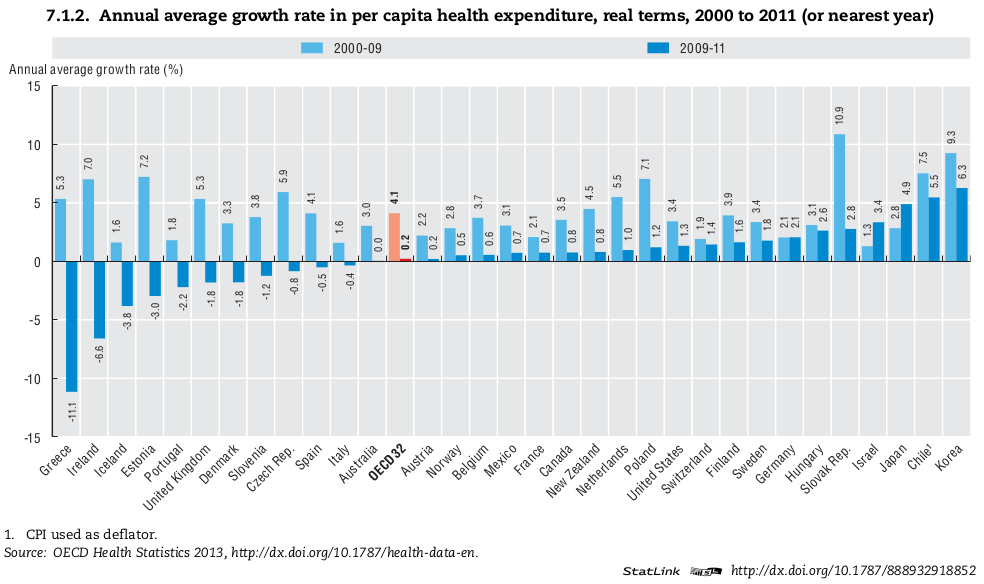 Comparing the 2009-2010 annual average growth rates for Australia, Japan, and Mexico to the 2009-2011 annual average growth rates for the other nations is probably comparing apples to oranges for such small datasets (2 vs. 3 years, respectively).  There is no prima facie reason to believe that growth rates are equivalent for each of 2009, 2010, and 2011 -- indeed, they are not.  Thus, omitting the 2011 data for these three nations, and then comparing the remaining 2009-2010 data to the 2009-2011 data for all other nations, may introduce a significant systematic bias.  If the OECD is going to show a chart like this, each nation should be compared on an equivalent timeframe basis, and not the ridiculous situation whereby some nations have 2009-2010 average annual growth rates whereas other countries have 2009-2011 average annual growth rates.

Regardless, there is 2011 data for Australia, Japan, and Mexico in the WHO database.  Why isn't the OECD using it?  And why is the OECD using 2008 as the latest data for Turkey?  The WHO database has data for Turkey up to 2011, and between 2008 and 2011, the WHO reports a 27% nominal increase in per-capita health expenditures (from $912 to $1161) for this country.  According to the WHO data, Turkey should be ranked ahead of Brazil, Mexico, and South Africa in any international per-capita health expenditure cost comparisons, and not behind them, as the OECD's Figure 7.1.1 shows.

Of course, this is all just bizarre.  The OECD data doesn't appear to match the CEA's data, and the OECD appears to be making claims that block the CEA's claims from being correct.  Which claims are right, if any?

But life apparently gets even more absurd when we look at the per-capita health expenditures between the OECD and WHO databases on an equivalent year basis (i.e., the "2011 [or nearest year]" dates set out in the OECD report), as shown in the table below. 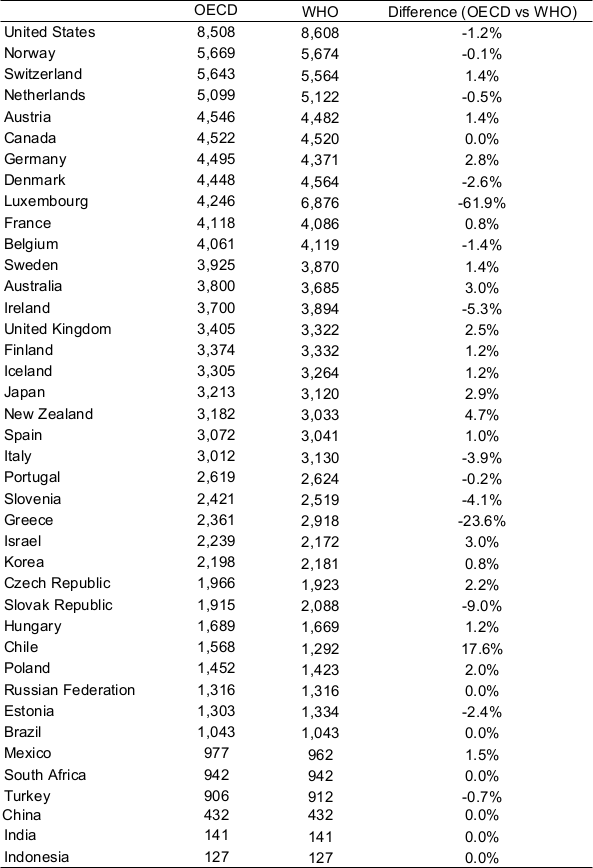 Per-capita total health expenditures for 2011 are 1.2% lower in the OECD dataset for the USA than in the WHO database.  The discrepancy is 2.8% higher for Germany, and so on.  Some of these differences may seem small, but they can have major impacts on interpreting year-to-year growth trends that are also in the low percent range.

Look at Luxembourg!  A 62% lower value by the OECD.  According to the WHO, Luxembourg spends $6,876 per capita, which places it well ahead of Norway for second place next to the USA.  But according to the OECD, Luxembourg spends only $4,246 per capita, or in 9th place, just ahead of France.  So which is it?  Is the USA spending 50% more than its nearest competitor (Norway) for per-capita total health expenditures, as the OECD claims?  Or is the USA spending only 25% more than its nearest competitor (a different one, Luxembourg) for per-capita total health expenditures, as the WHO claims?  The OECD also has Greece spending 24% less per capita than the WHO claims.  Chile is 18% higher in the OECD dataset.

Using the WHO database and normalizing for inflation via the CPI, total per-capita health expenditures in the USA exhibited the following nominal and real growth trends over the available data range.

So, the conclusion is that we have a data mess on our hands for real per-capita health expenditure trends in the United States (and other nations).  It is incumbent on the White House, the World Bank, the OECD, and the WHO to harmonize the dataset for this fundamental indicator and issue errata and corrected reports in the very near future.  Much like climate datasets, it appears we have major policies being proposed, constructed, and defended using potentially flawed information.  This whole field needs to be cleaned right up, right now.