Warning: mysqli_free_result() expects parameter 1 to be mysqli_result, bool given in /var/www/html/americanthinker/admin/common/functions/func.general.php on line 126
 The Christie Hype Begins - American Thinker
|

Establishment Republicans and the mainstream media are busy bruiting New Jersey governor Chris Christie as the "Man for All Factions," to borrow from the Time headline story penned by the once-dependably conservative Joe Scarborough (until "dependably" and "conservative" stopped being a good career move for Mornin' Joe).

The Christie script as been in the drawer for awhile, just waiting for Tuesday's election results, when the Bayonne Big Boy (not to be confused with Bob's big 'un) won reelection in the Garden State. Christie and Jersey are both being spun. But Jersey ain't no garden and Christie ain't no "Man for All Factions," unless conservatives have gone loco.

Here's a revealing bit of clichéd thinking from Scarborough's Time paean to the guv:

Christie, however, didn't give a damn [about Tea Party opposition]. Throughout the intraparty fight, the Jersey boy tore a page out of his hero Bruce Springsteen's songbook and defiantly struck a "No retreat, baby, no surrender" pose against withering right-wing rage. And now the Nov. 5 election results suggest that brazen, Christie-style bipartisanship might actually work.

That's right. Bruce Springsteen, great American general he. Springsteen, who's inked a song or two not terribly flattering of the old U.S. of A., the land that made him a rich, dependably left-leaning rocker. Mornin' Joe might want to check out Bruce's lyrics. Chris, too, for that matter. Not that an ambitious and opportunistic pol for all seasons is going to sweat the small stuff, like lyrics about the nation he wants to preside over. That wouldn't be cool.

Christie's thumping of a cipher Democrat (Barbara Buono -- she should have assumed the moniker "Sunny" just for yuks), is being ballyhooed as a tour de force by a savvy pol. But it isn't anything of the such, sniffs I.

Here's the Christie reelection playbook in a nutshell: Dance left some (ObamaCare), fudge a lot, pander -- well, lots -- and demonstrate competence (it doesn't take much to out-competence Democrats). Oh, and give voters a shtick; you know, two-fisted former prosecutor who's in everyone's face -- including the paperboy, err, person -- if they dare cross him. But isn't bullying un-PC?

But Christie, say the dependably squawking experts, shrewdly positioned himself throughout the tail end of his inaugural term to woo independent and D voters to landslide sacrificial lamb Barb. 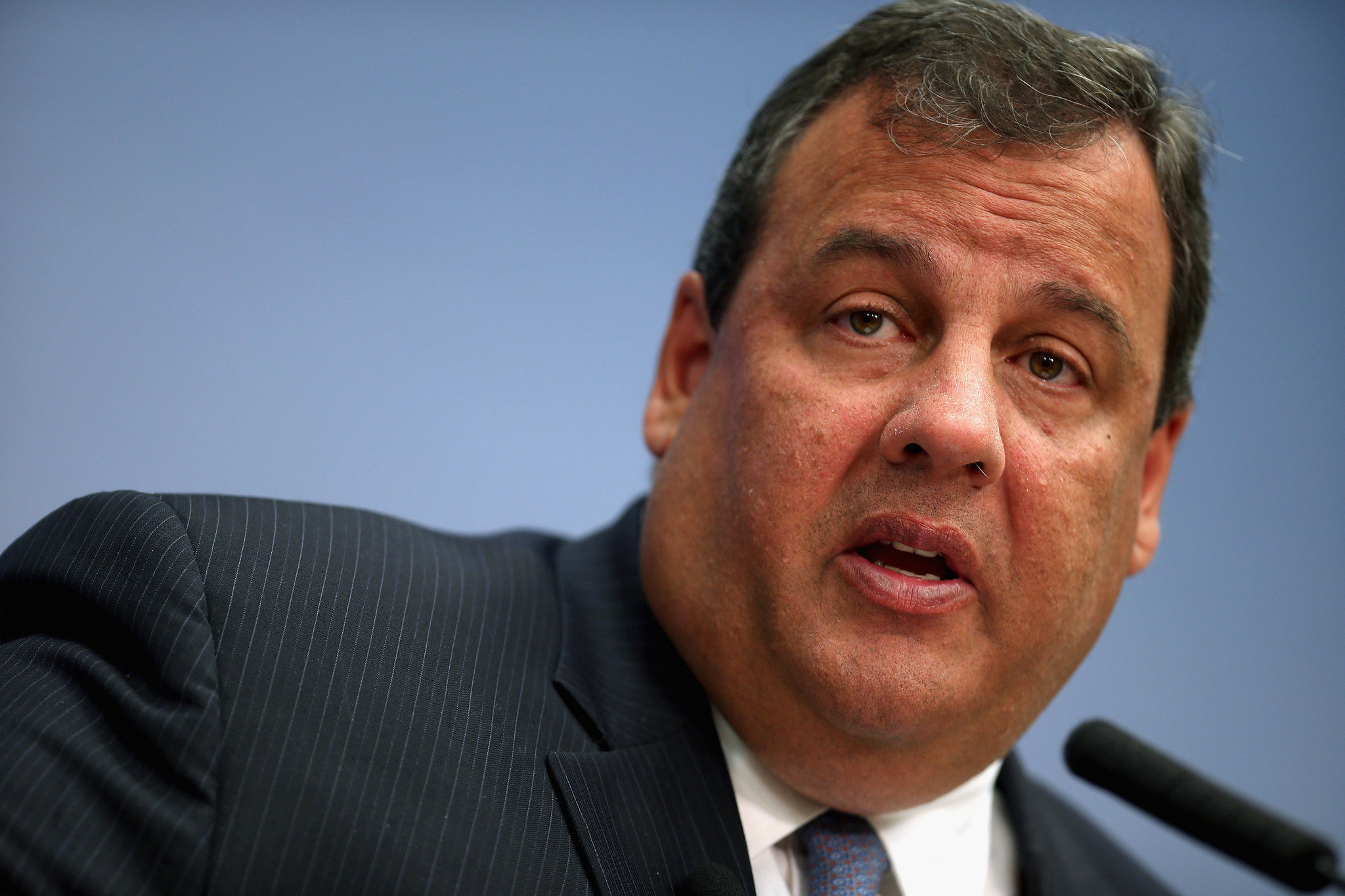 What Governor Lumpy did is what every puke Republican has done since Willkie to try to win elections: mute principles (if they hold any) and blur distinctions with Democrats. Christie was more interested in his political fortunes than advancing a coherent worldview or pushing substantive differences with Jersey's regent Democrats. Governor Lumpy wanted that January victory parade, baby, down Trenton's main drag (in an energy-efficient chariot with Mornin' Joe holding a bough of recycled garbage over Lumpy's head -- a bough made by 3rd graders in one of Newark's stellar public schools).

In these times, fraught with critical issues, involving dramatic fork-in-the-road questions (liberty or statism?), with an economy balancing precariously, with hardcore unemployment (misreported to gull the gullible that those who have given up job searches are just on hiatus), funny money policies out of the Fed (benefitting stockholders in the short run but promising nasty inflation mid to longer term)... need I continue?

Our times are times of momentous choices and decisions. Didn't Lincoln ask: "Whither we tend?" What sort of nation will we be? A declining, Europeanized nation -- fractious and fracturing? A nation where bedrock liberty has been shattered and piled helter-skelter? Where freedom is considered to be endless hours of social media and digital games, pee-poor government-run healthcare, and the dole, 'cause you're going to need that, too.

Where the takers make more claims on a dwindling pool of producers? Where our elite in government, the media, academia, and among their crony capitalist buds make life decisions for us, 'cause they're smart and we're dumb and us sheep need shepherds?

The street-smart Chris Christie doesn't ask: "Whither we tend?" That's a big question with the potential to divide, not unite "all factions" (as if, short of an Iranian nuclear attack, that's anywhere near realistic -- if then).

Christie's role model is less the fearless Bruce Springsteen than his other fellow Jerseyite, the late, unlamented George B. McClellan, once commander of the Army of the Potomac, who dithered while General Lee fought. Correction: McClellan dithered in fighting the real enemy, Lee and those pesky rebs. The Young Napoleon had no problem fighting and backstabbing Lincoln, the nation's commander-in-chief. McClellan was a Democrat who, nowadays, would have fit nicely into the Cuccinelli-loathing establishment R mold. Ironic, ain't it?

Christie, in his cheeky style, announced on the heels of his reelection that he's no moderate; gosh darn it, he's a red-meat conservative. Of course that begs the question, why didn't Governor Lumpy declare his conservatism before the election, contrary to his claim? Ah, making such a pronouncement would have trampled the narrative, i.e., pliable GOP pol reaches out to liberal constituency, makes nice, and see, wins.

But now Christie wants the GOP presidential nomination worse than Sinatra wanted that first gold record, and his momma birthed no dummy (or so Christie, Mornin' Joe, and his establishment GOP compadres believe). Hence, Christie is moving right to win the hearts and minds of village idiot conservatives, who comprise about two-thirds of the Republican base. Excuse me, the GOP establishment and MSM think conservatives are village idiots. Sadly -- for them -- conservatives aren't the gaped-mouth hayseeds so fancied.

Conservatives rallied to Ken Cuccinelli's beleaguered campaign, and along with the ObamaCare farce, helped Cuccinelli come from way behind in the closing couple two weeks to nearly upset governor-elect Sleazy, aka Terry McAuliffe. Meanwhile, more than a few high-profile Old Dominion puke Rs opposed Cuccinelli, and DC Republicans and their allies were no better to Cuccinelli, making sure the money spigot trickled at most for the Commonwealth's AG. The national Chamber of Compromise closed its wallet altogether.

Conservatives have the measure of establishment Rs; they get the scam... the little shuck and jive routine that Christie is in the midst of doing. It's rightly seen as nakedly cynical old politics. Grassroots conservatives cut slack for Mitt Romney, only to witness Romney fumble away the presidential election. Romney was the last straw in the game of "We must support the Republican presidential nominee regardless because the alternative is so awful to contemplate." Note, too, that establishment Republicans rarely bend to support conservatives, like Cuccinelli.

Consider this about Governor Lumpy. He had no coattails -- meaning his reelection added scant little to Republican numbers in the State Assembly. Governor Lumpy was all about Governor Lumpy in his reelection bid. Building strength in the legislature, finding ways to boost the base (not whoring it to accommodate libs) was as about as foreign to Christie as it was to another self-obsessed pol, Richard Nixon. Remember Nixon's famous 1972 landslide over George McGovern? Virtually coattail-less. Reagan in 1980 -- coattails.

But, then, Reagan held to conservative principles while negotiating tough political environments.

And whoa! Election night exit polling in Jersey revealed that Lumpy-lovin' voters love Hillary more, in a hypothetical matchup for the presidency in 2016. Imagine that. The carpetbagger in New York whacks Jersey's very own Bayonne Big Boy for president.

But that's the usual fate of Republican panderers: All spiffed up for the prom but sitting at home 'cause their fickle dates dumped them.