Warning: mysqli_free_result() expects parameter 1 to be mysqli_result, bool given in /var/www/html/americanthinker/admin/common/functions/func.general.php on line 126
 The Affordable Care Act is not 'Incomprehensible' - American Thinker
|

The Affordable Care Act is not 'Incomprehensible'

Fresh off her recent column lionizing Chris Christie, Peggy Noonan turns to making excuses in her Wall Street Journal column for Democrats who voted for ObamaCare because, well, it's just too darn complicated:

More and more it seems obvious that the vast majority of the politicians who pushed the bill in the House and Senate never read it. They didn't know what was in it. They had no idea. They don't understand insurance -- they're in politics, a branch of showbiz.

Some of them would have tried to read it, but it was 2,000 pages of impenetrable paragraphs -- real word-clots, word-slabs -- accompanied by long lines of swimming numbers. Comprehensive bills are never comprehensible ones -- they are meant to lack clarity. Administrations get bills passed and then let administration regulators interpret them. That's why Nancy Pelosi said: "We have to pass the bill so that you can find out what is in it." It was literally true!

After failing to read or understand the bill, members of Congress relied on briefings from some guy from the White House, some kid from the speaker's office, and whichever Ezekiel knockoff was available as an expert. [...]

The congressmen tried, in their distracted way, to understand. And gave up... Most of them had no idea what they were voting for. They're as surprised as anybody at what's happened.

This "ObamaCare is incomprensible" meme is used by both opponents and supporters. Back in 2009, Rep. John Conyers (D-MI) blithely said it was pointless to read the bill unless you had "two days and two lawyers to find out what it means after you've read it." Rep. John Fleming (R-LA), voted against the bill and noted that the 10,535 pages of final regulations are "incomprehensible." (Note: an earlier version of this article stated that Rep. Fleming had not read the bill itself and made his comment on the bill. That was incorrect and we apologize for the error.)

Granted, the bill is long and complicated. Granted, many paragraphs refer to amendments to the language in subsection iii, paragraph 2, etc. that mean nothing if you don't take the time to find the original text being amended. Granted, most people who aren't getting paid to write legislation don't want to spend their weekends reading 2,000-page bills.

It is absurd to claim, however, as Peggy Noonan does, that the ACA is "2,000 pages of impenetrable paragraphs."

To begin with, the Act is easy to find. A search for "text Affordable Care Act" brings up the document. The PDF version is here. 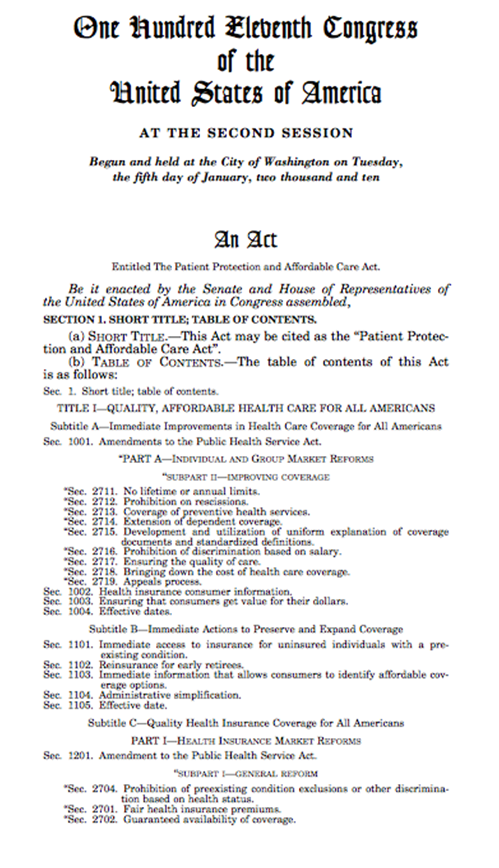 Each of these Sections are expanded in the Act, and further complicated when bureaucrats write the actual 10,000 pages of regulation that become law. But give me a break. This is not impenetrable. It's clear on page one that the Act mandates "immediate improvements." You don't need an advanced law degree to be concerned about possible cost increases accompanying increased coverage.

On Page 2 we find this item: "Sec. 1302. Essential health benefits requirements."A document search brings you -- after a grueling research project spanning as long as 60 seconds -- to page 46:

(b) ESSENTIAL HEALTH BENEFITS.-
(1) IN GENERAL.-Subject to paragraph (2), the Secretary shall define the essential health benefits, except that such benefits shall include at least the following general categories and the items and services covered within the categories:
(A) Ambulatory patient services.
(B) Emergency services.
(C) Hospitalization.
(D) Maternity and newborn care.
(E) Mental health and substance use disorder services, including behavioral health treatment.
(F) Prescription drugs.
(G) Rehabilitative and habilitative services and devices.
(H) Laboratory services.
(I) Preventive and wellness services and chronic disease management.
(J) Pediatric services, including oral and vision care.

Again, this is not "impenetrable" language.

It's crystal clear: ObamaCare mandates what is "essential" and outlaws "substandard" policies that don't offer these essentials. Secondly, it's entirely comprehensible that mandating pediatric dental and vision care for every American might lead to higher premiums. You think? But no, Ms. Noonan says, Congressmen are "as surprised as anybody at what's happened."

They deserve everything they get at the polls next fall.