Warning: mysqli_free_result() expects parameter 1 to be mysqli_result, bool given in /var/www/html/americanthinker/admin/common/functions/func.general.php on line 126
 Replacing Subsidies with Subsidies - American Thinker
|

Bjorn Lomborg -- the director of the Copenhagen Consensus Center -- is recommending that "[i]nstead of pouring more money into subsidizing inefficient renewables, we could make much cheaper, but more effective, investments in research and development into new energy sources."

Discussions around subsidies invariably end in incoherence, hypocrisy, or redundancy, or all of the above. By definition, if renewable energy was truly economically efficient, it wouldn't need a subsidy.

It is not clear what Lomborg is arguing for. What are these vague "new energy sources"? and who will be paying for these "investments in research and development"? If the public pays for these R&D investments in any direct or indirect form -- including and especially via the publicly-funded education and research systems, tax breaks/credits, etc. -- then this is just a different form of subsidization that doesn't get us to actual economic efficiency. All subsidies are inefficient, it is just that some are less inefficient than others. Most often we just move from one form of crony capitalism to another.

An honest discussion about energy sector subsidies would acknowledge that all forms of energy are subsidized to varying degrees. They always have been, and knowing the political processes and influences thereupon, they likely always will be.

Thus, if Lomborg is recommending we end all public subsidies not only to the renewable energy sector, but to all energy sectors, and instead let the private sector cover all R&D costs for improving current energy sources and developing new ones, that sounds like a potential plan. But if Lomborg is simply suggesting we shift public subsidies from one form of renewables to another (or between one stage of technology development to another), all the while ignoring other energy sector subsidies, this is unsatisfactory.

Lomborg's article also contains the interesting claim that "Spain now spends almost 1% of its GDP on subsidies for renewables -- more than on higher education. This is not sustainable, and not something most countries want to emulate." According to the most recent OECD education report, Spain spends 1.3% of GDP on tertiary (i.e., "higher") education, of which 1.1% comes from the public sector. Since "almost 1%" is clearly <1%, and both 1.1% and 1.3% are >1%, it is not clear how Lomborg's statement is accurate. In the future, it would be desirable for Lomborg to cite his sources, particularly when making such extraordinary claims.

Lomborg goes on to claim that "[t]he trend in human civilization has been to get away from renewables. In 1800, the world got 94% of its energy from renewables (mostly wood and wind). Today, it is just 13%." The link for this source in his article is dead, precluding fact-checking.

In addition, Lomborg states that "China, just before [the Copenhagen summit in 2009], dramatically promised to cut its carbon intensity (the amount of CO2 emitted for each dollar of GDP) over the next 10 years to just 40%-45% of its 2005 level. It's a heroic-sounding notion, but International Energy Agency figures show that China already was expected to reduce carbon intensity by 40% without new policies: As its economy develops, China inevitably will shift to less carbon-intensive industries."

This is in error. China is simply not reducing its carbon intensity by any meaningful standard (i.e., on both per capita and per unit GDP metrics). 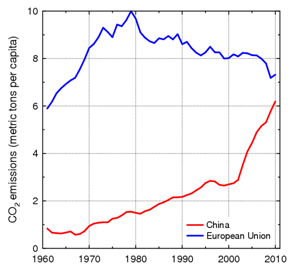 China also has the 10th highest CO2 emissions per constant 2005 dollar of GDP on a purchasing power parity (PPP) basis in the world, behind only (in descending rank order) Trinidad and Tobago, Turkmenistan, Kazakhstan, Uzbekistan, Mongolia, Iraq, Bosnia and Herzegovina, Ukraine, and South Africa. When we consider trends in CO2 emissions per unit constant dollar GDP-PPP between 2002 and 2010, the USA and the EU reduced their carbon intensities by 15% and 17%, respectively, whereas China's emission intensity was effectively unchanged (only a 2% reduction). 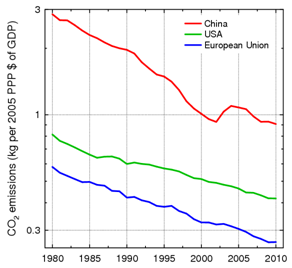 In 2002, China's CO2 emissions per unit GDP-PPP were 1.9-fold higher than the USA. By 2010, the ratio increased 2.2. The greenwashing of China's economy needs to stop. The data simply do not support it.

Overall, it is unclear where Lomborg wants us to go, never mind why and how. Playing the renewable energy subsidy shell game based on a suite of largely untested assumptions with seemingly contradictory data isn't the answer.