Warning: mysqli_free_result() expects parameter 1 to be mysqli_result, bool given in /var/www/html/americanthinker/admin/common/functions/func.general.php on line 126
 One Second After - American Thinker
|

Back in July, I wrote an article that examined the post-apocalyptic genre in fiction and in film. In that piece, I committed (at least) one sin in that I mentioned a book that I had not read. Having just corrected that failing, I'm here to tell you that everyone in America should read William R. Forstchen's novel One Second After.

Forstchen's novel takes place in post-9/11 America. And into that very real America, he introduces "the event" -- an electromagnetic pulse attack. EMP is not science fiction; it's been known about for decades. The Sun emits EMPs in solar flares, which have caused power blackouts.

An EMP attack involves detonating nuclear bombs high up in the atmosphere. With an EMP attack there is no radioactive fallout, nor bombed-out cities. But what a successful EMP attack would do is knock out our entire electric grid and fry all our electronic devices. An EMP attack would turn the lights out across America.

One Second After follows one community, the real town of Black Mountain, North Carolina, for one year after a devastating EMP attack. The town is left like all towns in America: utterly cut off from the outside. That's because an EMP attack would not only destroy the electrical grid and everything attached to it, the electrical systems of all vehicles built in the last few decades would also be destroyed. The only vehicles that would work would be antiques, such as Edsels and VW bugs. So the teeming millions in our cities would either be stuck, or have to walk out. 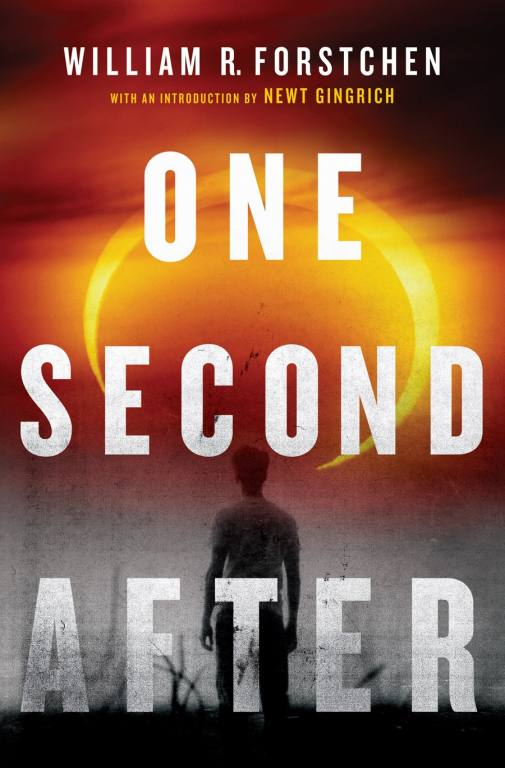 Beyond transportation and communication, the novel also looks at all the other systems that depend on electricity, like food and medicine. Diabetics, for instance, whose insulin must be kept cool, would not be long for this world. One of the more disturbing scenes occurs soon after the attack when the central character visits the local nursing home and finds it in total chaos. The food situation soon becomes dire and the town declares martial law. (Disabuse yourself of the idea that you'd be able to live off the land; in a nation of more than 300 million, game would quickly disappear.)

But the novel is not just about the logistics of an America without power; Forstchen peoples his book with powerful characters. The central character is an ex-military professor of history at the local college, John Matherson. Matherson becomes the leader of the town and its savior, (insofar as there can be any saving in a post-EMP America). Because we have a history prof as a protagonist, we're made to a look at how other great nations and empires came to their ends. We're even treated (on page 212 of the hardback) to a look at the Battle of Leignitz in 1241 in which the overconfident Germans encountered the invading Mongol horde. (Pride goeth before a fall.)

Like Leignitz, our novel also has a pitched battle, and there's plenty of action and even a bit of a love story. But what the novel is really about is one possible end for America. Americans need to be reminded that we could lose everything. Notions that "it can't happen here" are beyond foolish. A few undersized punks armed with box cutters changed America forever. But armed with nuclear devices, those insane radicals could make 9/11 seem like the good old days. The last chapter in the novel takes place exactly 365 days after the attack. It is a powerful ending, and it will take you all over the emotional map -- joy, despair, anger, shame.

To reach more folks, Forstchen's novel really should be made into a movie. But just as with Cormac McCarthy's bleak post-apocalyptic novel The Road, it would be difficult to film. One of the problems with the film of McCarthy's excellent book is that the boy just wasn't emaciated enough. (Viggo Mortensen did, however, starve himself nicely.) But for One Second After, one would need to cast an entire town's worth of anorexics.

Do we have the leadership in Washington to protect us from an EMP attack? After all, the feds couldn't (or wouldn't) protect Ambassador Christopher Stevens from al-Qaeda terrorists. The feds certainly didn't protect Bostonians from the Tsarnaev brothers. The U.S. Army couldn't even protect their own soldiers from a jihadist massacre at Fort Hood by army psychiatrist Nidal Hasan, one of their own. Which prompted Chief of Staff Gen. George W. Casey, Jr. to opine: "And as horrific as this tragedy was, if our diversity becomes a casualty, I think that's worse."

The current regime in Washington doesn't understand that there are untold millions of implacable Muslims who would rather see this world incinerated than for faraway people to worship as they see fit or for a single infidel woman's face to be uncovered. Even though the Muslim world is on fire, and Iran is closer to having the bomb than we had thought, some still cling to the belief that Barack Hussein Obama, in all his transcendent wonderfulness, can reason with these people. (I feel safer already.)

Besides our electric power system, America's other infrastructure is also vulnerable to disruption. But an EMP attack has the potential to destroy America. We need to quit worrying about "diversity" and get serious about survival.

My tardiness in reading Forstchen's 2009 novel may have been due to not having read anything by the author. But One Second After achieves real power, and is a genuine page-turner besides. Watch this short video of Forstchen on Fox News where he refers to an EMP attack as a "nation-wide Katrina event." Also watch this video of former Speaker Newt Gingrich, who wrote the novel's foreword. For more info on EMP, visit the novel's official website, which has several terrific links to check out. But to really get motivated, I recommend that you start by reading the novel. You can order One Second After at Amazon and at Barnes and Noble.