The United Nations Intergovernmental Panel on Climate Change (IPCC) was set up by the United Nations in 1988 and has been trying very hard to demonstrate the threat of a dangerous human influence on climate due to the emission of greenhouse gases.  This is in line with their Charter, which directs the IPCC to assemble reports in support of the Global Climate Treaty -- the 1992 Framework Convention on Climate Change (FCCC) of Rio de Janeiro.

It is interesting that IPCC "evidence" was based on peer-reviewed publications - but (reluctantly) abandoned only after protracted critiques from outside scientists.  E-mails among members of the IPCC team, revealed in the 2009 'Climategate' leak, describe their strenuous efforts to silence such critiques, often using unethical methods.

I will show here that the first three IPCC assessment reports contain erroneous scientific arguments, which have never been retracted or formally corrected, but at least have now been abandoned by the IPCC -- while the last two reports, AR4 and AR5, use an argument that seems to be circular and does not support their conclusion.  Australian Prof. "Bob" Carter, marine geologist and paleo-climatologist, refers to IPCC as using "hocus-pocus" science.  He is a co-author of the latest (2013) NIPCC (Non-governmental International Panel on Climate Change) report "Climate Change Reconsidered-II" www.climatechangereconsidered.org .  We also co-authored a critique of the 2013 IPCC-AR5 Summary <http://heartland.org/sites/default/files/critique_of_ipcc_spm.pdf>

This first report of the IPCC bases its entire claim for AGW on the fact that both CO2 and surface temperatures increased during the 20th century -- although not in lock-step.  They assign the major warming of 1910 to 1940 to a human influence -- based on a peer-reviewed paper by BD Santer and TML Wigley, which uses a very strange statistical argument.  But the basis of their statistics has been critiqued (by Tsonis and Swanson) -- and I have demonstrated empirically elsewhere that their conclusion does not hold.

While this faulty paper has never been retracted, it is now no longer quoted as evidence by the IPCC -- nor accepted by the overwhelming majority of IPCC scientists:  Most if not all warming of the early 20th century is due to natural, not human causes.

This report devotes a whole chapter, #8, to "Attribution and Detection." Its main feature is what one might call the "invention" of the "Hotspot," i.e. an enhanced warming trend in the tropical troposphere -- never actually observed.

Unfortunately, the "evidence," as presented by BD Santer, was published only after the IPCC report itself appeared; it contains two fundamental errors.  The first error was to argue that the Hotspot is a "fingerprint" of human influence -- and specifically, related to an increase in greenhouse gases.  This is not true.  The Hotspot, according to all model calculations, is simply an atmospheric amplification of a surface trend, a consequence of the physics of the tropical atmosphere.

[Technically speaking, it is caused by increased convective activity whereby cumulus clouds carry latent heat from the surface of the tropical ocean into the upper troposphere.  In other words, the Hotspot is not human-caused, but arises from a "moist-adiabatic lapse rate" of the atmosphere.  This effect is discussed in most meteorological textbooks and is widely accepted.]

How then did AR2 conclude that a Hotspot exists observationally?  This is the second issue: The IPCC selected a short interval in the atmospheric temperature record that showed an increase -- while the general trend was one of cooling.  In other words, they cherry-picked their data to invent a Hotspot -- as pointed out in a subsequent publication by PJ Michaels and PC Knappenberger [see graph below] 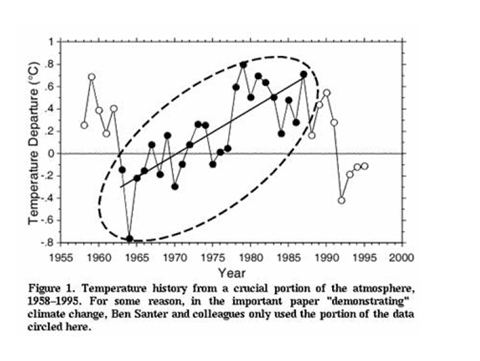 The matter of the existence of a Hotspot in the actual tropical troposphere has been the topic of lively debate ever since.  On the one hand, DH Douglass, JR Christy, BD Pearson and SF Singer, demonstrated absence of a Hotspot empirically while Santer (and 17[!] IPCC coauthors), publishing in the same journal, argued the opposite.  This issue now seems to have been finally settled, as discussed by Singer in two papers in Energy & Environment [2011 and 2013].

It is worth noting that a US government report [CCSP-SAP-1.1 (2006)] showed absence of a Hotspot in the tropics (Chapter 5, BD Santer, lead author).  But the report's Executive Summary managed to obfuscate this result by referring to global atmosphere rather than tropical.

It is also worth noting that while the IPCC-AR2 used the Hotspot invention to argue that the "balance of evidence suggest a human influence," later IPCC reports no longer use the Hotspot argument.

Nevertheless, one consequence of this unfortunate phrase in AR2 has been the adoption of the Kyoto Protocol, an international treaty to limit emissions of greenhouse gases.  Even though Kyoto expired in 2012, it has managed to waste hundreds of billions of dollars so far -- and continues to distort energy policies with uneconomic schemes in most industrialized nations.

AR3 attributes global warming to human influences based on the "Hockey-Stick" graph, using published papers by Michael Mann, derived from his analysis of multi-proxy data.  The hockeystick graph [bottom graph below] claims that the 20th century showed unusually rapid warming -- and thus suggests a strong human influence.  The graph also does away with the well-established Medieval Warm Period and Little Ice Age, which were shown in earlier IPCC reports [see top graph below]. 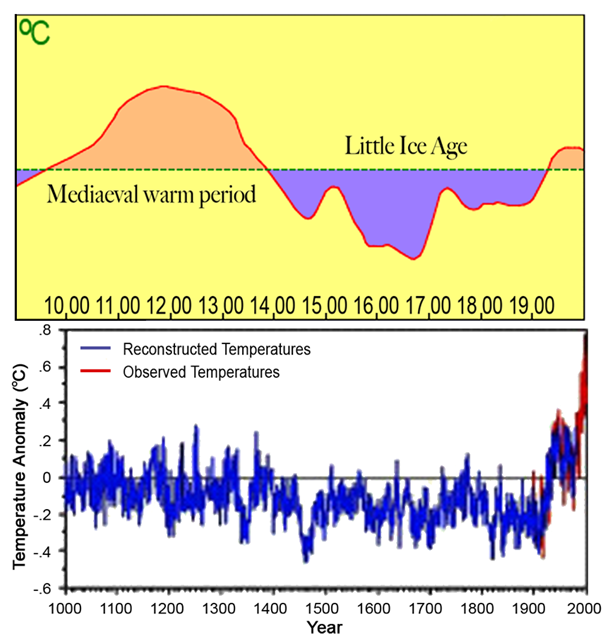 It was soon found that the Hockeystick graph was in error and did not deserve continued reliance.  Canadian statisticians Steven McIntyre and Ross McKitrick demonstrated errors in Mann's statistical analysis and in the use of certain tree-ring data for calibration.  In fact, they showed that Mann's algorithm would generate a Hockeystick graph -- even if the input data was pure noise.  [I served as a reviewer for M&M's initial paper in Energy & Environment 2003.]

It is worth noting that the IPCC no longer uses the Hockeystick to support human-caused warming, even though AR3 still claims to be at least 66% certain that greenhouse-gas emissions are responsible for 20th century warming.

Both reports use essentially the same faulty argument in their attempt to support their conclusion of human-caused global warming.  Their first step is to construct a model that tries to match the reported 20th-century surface warming.  This is not very difficult; it is essentially a 'curve-fitting' exercise: By selecting the right level of climate sensitivity and the right amount of aerosol forcing, they can match the reported temperature rise of the final decades of the 20th century, but not the initial decades -- as becomes evident from a detailed graph in their Attribution chapter.  This lack of agreement is due to the fact that their models ignore major forcings -- both from variations of solar activity and from changes in ocean circulation.

They then use the following trick.  They re-plot their model graph, but without an increase in greenhouse gases; this absence of forcing now generates a gap between the reported warming and unforced model.  Then they turn around and argue that this gap must be due to an increase in greenhouse gases.  It appears to me that this argument may be circular.  Even if the reported late-20th-century surface warming really exists (it is absent from the satellite and radiosonde records), the IPCC argument is not convincing.

It is ironic, however, that IPCC claims increasing certainty (at 90% in AR4 and at least 95% in AR5) for an attribution to human causes, which appears to be contrived.  Additionally, while AR4 calculates a Climate Sensitivity (for a doubling of CO2) of 2.0 - 4.5 degC, AR5 expands the uncertainty interval to 1.5 - 4.5 degC.  So much for the claim of increased certainty in the IPCC-AR5 Summary.

Yet, while claiming increased certainty about manmade global warming, both reports essentially ignore the absence of any surface warming trend since about 1998.  Of course, they also ignore absence of any significant warming in the troposphere, ocean record, and proxy data during the crucial preceding (1979-1997) interval.

In spite of much effort, the IPCC has never succeeded in demonstrating that climate change is significantly affected by human activities -- and in particular, by the emission of greenhouse gases.  Over the last 25 years, their supporting arguments have shifted drastically -- and are shown to be worthless.  It appears more than likely that climate change is controlled by variations in solar magnetic activity and by periodic changes in ocean circulation.

[Full disclosure: I have a very small dog in this fight, having demonstrated some time ago that solar-emitted magnetic fields, projected into interplanetary space by the solar wind, modulate the intensity of cosmic rays striking the Earth's atmosphere; this is no longer a contentious, hot-topic issue.  The exact mechanism by which cosmic rays then influence the climate is not known in detail, but current efforts, mainly by a Danish research group, focus on changes in Earth's cloudiness.]

However, that there is no doubt about the existence of such a solar influence on climate.  As shown in the graph below, cosmic-ray intensity (as measured by the radioactive carbon isotope C-14) and terrestrial climate (as measured by the oxygen isotope O-18) correlate in amazing detail over an interval of at least 3000 years (see graph below; the bottom graph is the central section, blown up to reveal detail) 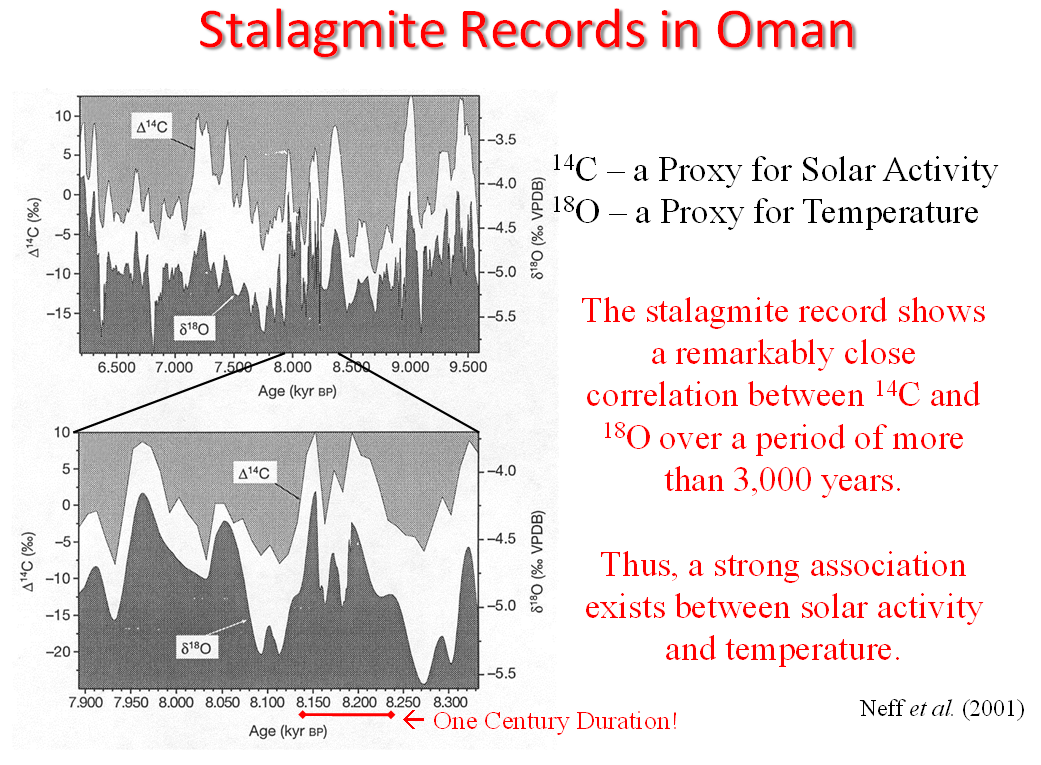 S. Fred Singer is professor emeritus at the University of Virginia and director of the Science & Environmental Policy Project.  His specialty is atmospheric and space physics.  An expert in remote sensing and satellites, he served as the founding director of the US Weather Satellite Service and, more recently, as vice chair of the US National Advisory Committee on Oceans & Atmosphere.  He is a senior fellow of the Heartland Institute and the Independent Institute.  He co-authored the NY Times best-seller Unstoppable Global Warming: Every 1500 years.  In 2007, he founded and has since chaired the NIPCC (Nongovernmental International Panel on Climate Change), which has released several scientific reports [See www.NIPCCreport.org].    For recent writings, see http://www.americanthinker.com/s_fred_singer/ and also Google Scholar.