Warning: mysqli_free_result() expects parameter 1 to be mysqli_result, bool given in /var/www/html/americanthinker/admin/common/functions/func.general.php on line 126
 How Islamists Stole a Congressional Hearing - American Thinker
|

How Islamists Stole a Congressional Hearing

Oppressed Hindus from Bangladesh asked for a congressional committee hearing to make known their victimization by Islamists.  They got their hearing, but they were not given a chance to speak; instead, Islamists took over.

Not one Hindu was invited to be on the panel of speakers.  The Islamists trashed the only political movement in Bangladesh that offers some hope of secularism.

Evidence suggests that an American lobbying firm working for a Bangladeshi war criminal bought influence with the hearing.  The same day, the NY Times wrote a staggeringly pro-Islamist editorial, raising the question that perhaps they too were bought with lobbyist money.

On November 20, 2013, a group of loyal Hindu Bangladeshi American citizens were granted a long-awaited hearing by the U.S. House Foreign Affairs Committee.  The Hindus wanted to ask the U.S. to stay the hand of the religious extremists who are pushing their compatriots remaining in Bangladesh toward genocide, described more fully here.

Bangladesh is erroneously considered a moderate Muslim country by the State Department.  Hindus and other minorities -- Buddhists, Christians, animists, and atheists -- live in continuous anxiety, even terror.  Minorities have scant protection against Islamist depredations such as murder, rape, and burning of their houses and places of worship, as well as theft and discrimination in the Bangladeshi legal system.  Protection from the police is uncertain, since Bangladeshi police often either ignore minorities' complaints or are themselves the perpetrators.  This land, which was once solely inhabited by Hindus and Buddhists, now has a minority population of non-Muslims of only about nine percent.  Mass murders, forced conversions, and forced flight account for the drop in numbers.

Right now is an especially frightening time for Bangladeshi minorities, because elections will happen soon.  Historically, that has always meant heightened danger, with Muslim mobs attacking vulnerable minorities no matter what the outcome of the election might be.

Two major forces vie for control of Bangladesh: secularists and Muslim fundamentalists.  The incumbent party, the Awami League, is nominally secularist and offers some hope for minorities.  Opposing it is the Bangladesh National Party, allied with a group called Jamaat-e-Islami, which wants to impose a totalitarian form of Islam on everyone in that country.  In the 1971 war of liberation, Jamaat was involved in war crimes against Bangladeshis, especially Hindus, who wanted freedom from Pakistan and Islamic fundamentalism.

The AL is currently conducting trials of the war criminals, which the BNP objects to on procedural grounds.  While some of AL's judicial practices may be questionable, at bottom, the BNP wants to spare their Jamaat affiliates from possible execution for their past deeds.  The AL views Jamaat as a potential disaster for democracy, much as we would if al-Qaeda were included in our elections, and is trying to keep Jamaat out of the electoral process.

Whatever its flaws might be, the AL is the only present-day bulwark against the Talibanization of Bangladesh.

The contentious issue of the war crimes tribunals so dominated the House Foreign Affairs Committee hearing that the problem of spreading Islamism and the persecution of minorities received short shrift.  Although the BNP members did mention minorities in passing, not one Hindu or other minority was on the panel.  The drift of the BNP position was that by excluding Jamaat, there would -- somehow, mysteriously -- be disturbances which would destabilize the country and affect minorities, too.  BNP sidestepped the intolerance and disrespect for non-Muslims that is the root of the problem.  It was a bizarre and revolting reversal of justice. 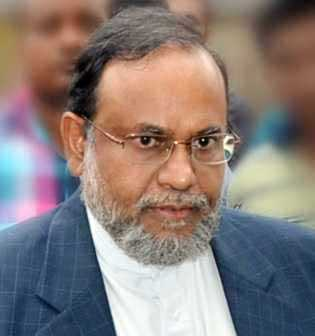 The hearing appears to have been hijacked.  Hindu activists believe that a strong BNP lobby is operating in Washington.  It is already established that a major lobbying firm, Cassidy & Associates, represents war criminal Mir Abdul Qasim Ali (pictured left), who is held in custody in Bangladesh awaiting trial and possibly execution.  Ali was implicated in a wartime killing spree and is a major fundamentalist player.  He is a senior member of Jamaat who supports Wahhabist values, and he heads a Saudi-based bank that launders money for Jamaat and terrorists.

Gregg Hartley (pictured right), vice chairman and CEO of Cassidy & Associates, has been conducting a publicity campaign in Europe and the U.S. to get Ali released from jail, according to his home-state newspaper, the St. Louis Post-Dispatch.  Disclosures of lobbyist records show that Cassidy and Associates has received more than $500,000 in the past year from Ali and his very wealthy family.

Hartley's battle to free Ali involves discrediting the purpose as well as the methods of the war crimes tribunals, thereby legitimizing Islamism and its abuses.  Hartley also lobbies for Pakistan and other Islamist clients, as stated on his firm's website.

Apparently Hartley does not object to working for Islamists, even if they would limit his own freedom if they came to power in the U.S.

An inescapable question arises: was a paid campaign waged to discredit the war crimes tribunal at the Foreign Affairs hearing in order to spare Hartley's client?  Were Hindus kept off the panel so that they could not give evidence of the complete Islamist take over Bangladesh is facing, and of the persecution that minorities are suffering even now?  This is a very reasonable speculation, and an investigation of Cassidy's activities and finances is in order.

A similar question must be raised about the alarming editorial in the NY Times published on the same day.  The Times lays the blame for Bangladesh's growing instability solely on the AL and states that Jamaat should be legitimized by including it in the upcoming elections.

Remember that Germany voted the Nazis into power.  A similar fate could await this vulnerable country, already teetering on the brink of totalitarian Islam.  One has to wonder why the NY Times took such a disastrous editorial position.

Madeline Brooks is a counter-jihad activist and writer, based in New York City.  She can be reached at ResistJihad@aol.com.