The nation remembers the 50th anniversary of one of the more stunning assassinations in world history. Riding in a motorcade through downtown Dallas, John F. Kennedy was shot and killed on November 22, 1963. The effort to understand this staggering death as text has taken decades to study and yet remains enigmatic for many. In the midst of the historical revisionism, is the demonized city of Dallas -- "the city that killed a President." The pejorative shadow under which Dallas has dwelled for fifty years is undeserved and part of a larger ideological rejection of Texas and the conservative politics common to the city and the state.

In the common revisionist telling of the assassination, Dallas was a city that hated President Kennedy for being too soft on Communism. Advertisements in the Dallas newspaper at that time argued strongly against the President's politics. The Dallas Morning News headlined the era this way recently, "Extremists in Dallas created volatile atmosphere before JFK's visit." The clear implication not unlike Clinton's take on the Oklahoma City bombing or partisan shots at Sarah Palin taken after the shooting in Tucson, conservative political arguments make political violence happen.

"The image of Dallas as a bulwark of right-wing extremism lodged in the American mind during the early 1960s. The reality was more complicated. Most people, here as elsewhere, were more interested in orbiting astronauts, James Bond movies, and Elvis than they were in attending meetings of the ultra-conservative John Birch Society. But complexity surrendered to the image when President John F. Kennedy was assassinated in Dealey Plaza on Nov. 22, 1963. Dallas became known to the world as the city of hate, the city that killed Kennedy."

The article provides anecdote upon anecdote as to how conservative and anti-communist some in Dallas were prior to the assassination. Parks' historical detailing on conservative politics in the city are part of today's "Red Scare" that views conservatives as an Al Qaeda-like threat to the nation.

The Warren Commission investigated this factor in the assassination and concluded:

"It has been suggested that one of the motivating influences operating on Lee Oswald was the atmosphere in the city of Dallas, especially an atmosphere of extreme opposition to President Kennedy that was present in some parts of the Dallas community and which received publicity there prior to the assassination. Some of that feeling was expressed in the incident involving then vice-presidential candidate Johnson during the 1960 campaign, in the treatment of Ambassador Adlai Stevenson late in October of 1963 and in the extreme anti-Kennedy newspaper advertisement and handbills that appeared in Dallas at the time of the President's visit there. The commission has found no evidence that the extreme views expressed toward President Kennedy by some right-wing groups centered in Dallas or any other general atmosphere of hate or right-wing extremism which may have existed in the city of Dallas had any connection with Oswald's actions on November 22, 1963." 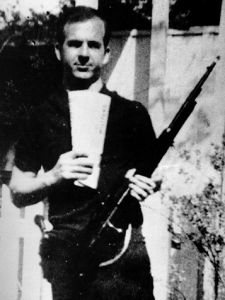 General Edwin Walker in Dallas, months before the Kennedy assassination. Oswald's fixation on proving himself as a serious intellectual Marxist by killing Walker and the President of the United States is blurred and blended into conspiracy theories better suited to the fantasies of men like Oliver Stone who cannot accept any instance of political violence rooted in the political passions of the left.

As someone who grew up in Dallas, lived in Kansas and Ohio for nearly 20 years and recently returned, I see the condescending ideology directed at this great state and city. Our blue elite do not smear Boston as fomenting the recent bombings at the marathon. Instead we characterize the city as "Boston Strong." Dallas endured the mad outrage of a Marxist radical bent on proving his worth to the world through his death as text. Assassinations like those directed at Walker and Kennedy are not the character of Dallas. Dallas is far more than the caricature of capitalist excesses found in JR Ewing.

Dallas provides one of the more powerful economic engines lifting the nation away from decline amidst draconian regulatory fervor that tried to "crucify" the oil and gas interests found here. Dallas area innovations in oil and gas fracking are foundational to the incredible reversal of CO2 emissions in the United States and the first clear opportunity to accomplish a major geostrategic American goal of energy independence. Affordable housing in Dallas means far more in reducing homelessness and poverty than the rent controls of New York and San Francisco. Dallas-Fort Worth is home to 6.3 million people and is the fastest-growing metro area in the nation. Dallas-Fort Worth has the sixth most billionaires in the world and the third largest airport. Dallas has a great array of high quality intellectual and academic institutions. With the nation's largest arts district and a vast culinary array of restaurants, Dallas is one of the world's great cities.

Dallas is long overdue to step out from the ideological shadow cast by misleading intellectual leadership that falsely slandered it as the "city that killed a president." Dallas mourns the loss of a great American president and celebrates the character of a community that overcame this death as text, authored by Lee Harvey Oswald on November 22, 1963.

Ben Voth is an associate professor of communication studies and director of debate and speech programs at Southern Methodist University in Dallas.