In a recent edition of Ezra Klein's WonkBlog over at the Washington Post, Klein claims that "[t]he falling deficit has been a disaster for the GOP," and that "the deficit has fallen dramatically. In fact, it's fallen at a faster rate than at any other time since World War II. And the Congressional Budget Office [CBO] sees it stabilizing in the (totally manageable) two-to-three percent range through the next decade."

Has the federal deficit over the past few years "fallen at a faster rate than at any other time since World War II"? Maybe. Between 2009 and 2012, the federal deficit declined from 10.1% of GDP to 7.0% of GDP, for an annual average change of +1.03%. The next highest three-year deficit reduction period average since 1950 was +1.00% between 1995 and 1998 with Gingrich as Speaker of the House. Given the error bars on budgeting, I'd consider the two periods a tie. 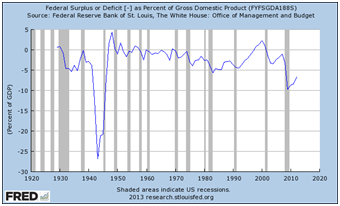 But the real questions are whether CBO predictions of reaching a 2-3% of GDP federal deficit by 2015 are realistic, and whether this level is "totally manageable... through the next decade"? After only declining by an average of 1.0% of GDP per year in the three-year rebound period after the 2009 bottom, somehow the CBO is projecting that the deficit reduction rate will accelerate to average between 1.3% and >1.4% of GDP per year between 2013 and 2015. This would be a highly unusual trend if realized. Furthermore, the CBO's economic projection record is far from solid. I do not recall the CBO predicting the financial crisis itself several years out at high accuracy.

So how does the Washington Post see this as "totally manageable"? The historical evidence indicates that a deficit in the "two-to-three percent range" leads to a doubling of the federal debt as a percentage of GDP every quarter-century. At the "totally manageable" deficit levels promoted by Klein, the USA would likely see its federal debt exceed 1000% of GDP before the end of the 21st century. In contrast, a truly "totally manageable" long-term deficit level is ideally zero, but certainly no more than about one percent of GDP. And all this presumes that interest rates do not increase back up to historic norms. If they do, a debt interest payment spiral could ensue regardless of whether annual deficits have been nearly brought under control.

In addition, between 1960 and 1981, the USA's average real annual GDP growth was 3.7%. Between 1982 and 2007 it averaged only 3.1% (if we add in 2008 through 2012, the average drops to 2.7%). If a lower rate of GDP growth is the new future American norm, the levels of "totally manageable" federal deficits based on historic economic data must be further adjusted downwards.

Of course, the federal deficit is just part of the problem. The USA's general government net lending/borrowing balance was -8.3% of GDP in 2012. The IMF is predicting it will stabilize at -3.9% by 2015 and remain there until at least 2018. Is this "totally manageable"? On the figure below, the corresponding data for France is also included. Only a few days ago, Standard and Poor's cut "its rating on France's debt for the second time in less than two years... to third tier, halfway to junk." And yet, between 1980 and 2012, France's average general government net lending/borrowing balance (-3.4% of GDP) was significantly better than the American average (-4.0%), and the IMF projections are for France to move to an effective general government balanced budget (-0.4%) by 2018, while the USA only improves to a still large deficit of -3.8% over the next five years. 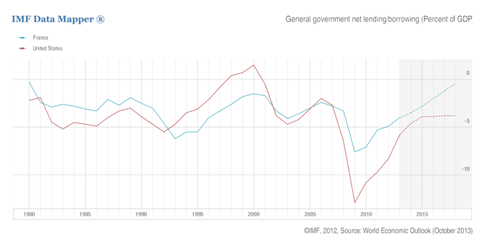 The general government gross debt positions of the two nations are telling. France has been in a consistently far better debt position since 1980 (and, indeed, since WWII) than the USA, and this is projected to continue. If France's debt position is leading to a downgrading "halfway to junk," how long can it be before the USA follows? 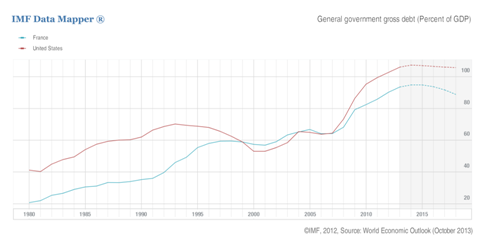 Is the USA the "Brokest Nation in History" as Mark Steyn has observed? Absolutely. It has been going progressively more broke since the early 20th century. Sure, there have been some ups-and-downs on the debt road since the 1910s, but the overall trend is a massive debt accumulation from 2.7% of GDP in 1916 up to the present value of >100%. At least there was a good reason to see debt reach 121% of GDP at the end of WWII. What is the good reason for current debt levels that are nearly as high? There aren't any, and -- barring any geopolitical catastrophes -- there won't be any global postwar recovery to fuel the same type of multi-decadal debt-decline period we saw from the late-1940s through the mid-1970s.

And so the USA dances on the debt knife edge. Debt is at historic highs while interest rates are at anomalous historic lows, and commentators somehow see continued long-term high annual deficits as "totally manageable." Incorrect. It is totally unmanageable. America needs to return to surplus territory within the next five years and begin paying down that massive debt before the grim reaper of high interest rates appears. Otherwise, the USA will rapidly discover what Canada learned in the early 1990s from its own debt crisis. Is this possible? Yes, Canada went from a general government deficit of 6.6% of GDP (the USA is at a projected 5.8% deficit in 2013) to a surplus of 0.2% in only three years (1994-1997). The GOP needs to demand more: a general government surplus by 2016 via whatever means are necessary.