Warning: mysqli_free_result() expects parameter 1 to be mysqli_result, bool given in /var/www/html/americanthinker/admin/common/functions/func.general.php on line 126
 Surreal and Suicidal: Modern Western Histories of Islam - American Thinker
|

Rereading some early history books concerning the centuries-long jihad on Europe, it recently occurred to me how ignorant the modern West is of its own past. The historical narrative being disseminated today bears very little resemblance to reality.

Consider some facts for a moment:

A mere decade after the birth of Islam in the 7th century, the jihad burst out of Arabia. Leaving aside all the thousands of miles of ancient lands and civilizations that were permanently conquered, today casually called the "Islamic world" -- including Morocco, Algeria, Tunisia, Libya, Egypt, Syria, Iraq, Iran, and parts of India and China -- much of Europe was also, at one time or another, conquered by the sword of Islam.

In 846 Rome was sacked and the Vatican defiled by Muslim Arab raiders; some 700 years later, in 1453, Christendom's other great basilica, Constantinople's Holy Wisdom (or Hagia Sophia) was conquered by Muslim Turks, permanently. 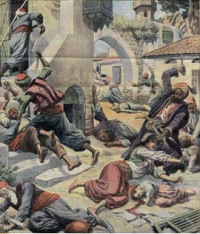 The few European regions that escaped direct Islamic occupation due to their northwest remoteness include Great Britain, Scandinavia, and Germany. That, of course, does not mean that they were not attacked by Islam. Indeed, in the furthest northwest of Europe, in Iceland, Christians used to pray that God save them from the "terror of the Turk." These fears were not unfounded since as late as 1627 Muslim corsairs raided the Christian island, seizing four hundred captives and selling them in the slave markets of Algiers.

Nor did America escape. A few years after the formation of the United States, in 1800, American trading ships in the Mediterranean were plundered and their sailors enslaved by Muslim corsairs. The ambassador of Tripoli explained to Thomas Jefferson that it was a Muslim's "right and duty to make war upon them [non-Muslims] wherever they could be found, and to enslave as many as they could take as prisoners."

In short, for roughly one millennium -- punctuated by a Crusader-rebuttal that the modern West is obsessed with demonizing -- Islam daily posed an existential threat to Christian Europe and by extension Western civilization.

And therein lies the rub: Today, whether as taught in high school or graduate school, whether as portrayed by Hollywood or the news media, the predominant historic narrative is that Muslims are the historic "victims" of "intolerant" Western Christians. That's exactly what a TV personality recently told me live on Fox News.

So here we are, paying the price of being an ahistorical society: A few years after the Islamic strikes of 9/11 -- merely the latest in the centuries-long, continents-wide jihad on the West -- Americans elected a man with a Muslim name and heritage for president, who openly empowers the same ideology that their ancestors lived in mortal fear of, even as they sit by and watch to their future detriment.

Surely the United States' European forebears -- who at one time or another either fought off or were conquered by Islam -- must be turning in their graves.

But all this is history, you say? Why rehash it? Why not let it be and move on, begin a new chapter of mutual tolerance and respect, even if history must be "touched up" a bit?

This would be a somewhat plausible position -- if not for the fact that, all around the globe, Muslims are still exhibiting the same imperial impulse and intolerant supremacism that their conquering forbears did. The only difference is that the Muslim world is currently incapable of defeating the West through a conventional war.

Yet this may not even be necessary. Thanks to the West's ignorance of history, Muslims are flooding Europe under the guise of "immigration," refusing to assimilate, and forming enclaves which in modern parlance are called "enclaves" or "ghettoes" but in Islamic terminology are the ribat -- frontier posts where the jihad is waged on the infidel, one way or the other.

All this leads to another, perhaps even more important point: If the true history of the West and Islam is being turned upside its head, what other historical "orthodoxies" being peddled around as truth are also false?

Were the Dark Ages truly benighted because of the "suffocating" forces of Christianity? Or were these dark ages -- which "coincidentally" occurred during the same centuries when jihad was constantly harrying Europe -- a product of another suffocating religion? Was the Spanish Inquisition a reflection of Christian barbarism or was it a reflection of Christian desperation vis-à-vis the hundreds of thousands of Muslims who, while claiming to have converted to Christianity, were practicing taqiyya and living as moles trying to subvert the Christian nation back to Islam?

Don't expect to get true answers to these and other questions from the makers, guardians, and disseminators of the West's fabricated epistemology.

In the future (whatever one there may be) the histories written about our times will likely stress how our era, ironically called the "information age," was not an age when people were so well informed, but rather an age when disinformation was so widespread and unquestioned that generations of people lived in bubbles of alternate realities -- till they were finally popped.

Raymond Ibrahim is author of Crucified Again: Exposing Islam's New War on Christians, which deals with both history and current events. A Shillman Fellow at the David Horowitz Freedom Center and an associate fellow at the Middle East Forum, he wrote his master's thesis on an early battle between Islam and the West under the direction of military historian Victor Davis Hanson.