Warning: mysqli_free_result() expects parameter 1 to be mysqli_result, bool given in /var/www/html/americanthinker/admin/common/functions/func.general.php on line 126
 Obama's Circle of Appeasers - American Thinker
|

On July 6, 1939 the British Foreign Office heard from the British Military Attaché in Berlin that Hitler's Finance Minister Count Lutz Schwerin von Krosigk had advised a visiting British General: "Take Winston Churchill into the Cabinet. Churchill is the only Englishman Hitler is afraid of. He does not take Prime Minster Chamberlain or Halifax seriously, but he places Churchill in the same category as Roosevelt. The mere fact of giving him a leading Ministerial post would convince Hitler that we really meant to stand up to him."

In 2013, there is no Churchill anywhere except Israeli prime minister Benjamin Netanyahu. He is the lone prophet who is warning the world not to be fooled and misled by the new conciliatory tone of the new Iranian president Hasan Rouhani while his regime continues developing its nuclear weapons program.

There is no Roosevelt in the White House. Roosevelt did not try to meet, talk to, or negotiate with Hitler or any of his lieutenants.

Sadly, President Obama has tried repeatedly to meet and shake the hand of one of the lieutenants of the true dictator of Iran, Ali Khamenei. While Obama proudly described his 15-minute phone call with Iranian president Rouhani as an historical breakthrough which has the potential to resolve the nuclear issue through negotiations and form a new relationship with Iran, Rouhani described the phone call as the culmination of a desperate and humiliating U.S. pursuit of the Iranian president. 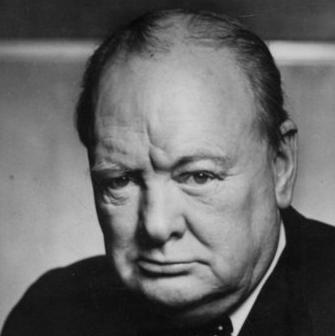 In the Middle East, brutal dictators only respond to the fear of a credible threat of the use of physical force. The fact that Obama has been so desperate to get to the negotiating table with a brutal repressive regime that is world's biggest state sponsor of terrorism and is aggressively pursuing nuclear weapons capability sends a dangerous signal to the Iranians that Obama does not have the mettle for the use of force against the regime.

Furthermore, no one in Obama's present cabinet could convince Khamenei that they mean to stand up to him. His present second-term national security cabinet and advisors consist of old time friends prior to his becoming president, who believe, as he does, in making friends with the Muslim world, engaging and appeasing enemies and brutal dictators, sympathizing with the Palestinians, blaming Israel for lack of peace, and pressuring an ally for dangerous concessions.

John Kerry, the Secretary of State: As a senator he was a fierce critic of Bush's hardline stance against Syrian President Bashar Assad, and worked hard to undercut the White House sanctions against Syria by advocating a policy of engagement. He also stated in July that the core issue of instability in the Middle East and in many other parts of the world is the Palestinian-Israeli conflict.

Chuck Hagel, Secretary of Defense: He opposed sanctions against Iran and called for direct negotiations with the Iranian regime. He also has advocated for direct talks with Hamas and Hizb'allah in the past, which the US considers to be terrorist organizations.

John Brennan, the CIA Director: As Obama's advisor for Counterterrorism, he stated that the U.S. policy should be to "build up the more moderate elements within Hizb'allah." He has refused to link the words" Islamic" and "terrorism" and called Jerusalem by its Arab name "Al Quds."

Susan Rice, the National Security Advisor: Human Rights activists say that Rice has been very close and friendly with many repressive African dictators since the 90s and looked the other way when they committed atrocities. As the UN ambassador, she fought the Security Council's attempt to raise the issue that Rwandan President, Paul Kagame, with whom she has a close relationship, supplied and financed M23, a brutal Congo rebel force that is accused of committing atrocities. Last year she gave a glowing eulogy to the late Ethiopian prime minister, Meles Zenawi who silenced political opponents, forged a single-party state, and dismantled the rule of law. She failed to speak up when Iran was elected to the UN Women's Commission but strongly condemned Israeli settlement activity as eroding hope for peace and stability in the region.

Samantha Power, the U.S. Ambassador to the UN: As the first head of the President's Atrocities Prevention Board, she was silent on the violence in Syria and in South Sudan, but suggested that the US should send troops to invade Israel to impose a two-state solution.

With such circle of friends advising him, there is no chance that Obama will change his core beliefs and militarily stop Iran from gaining nuclear weapons capability.

The only one left to fear is Bibi Netanyahu. As the Israeli prime minister promised the UN General Assembly echoing Churchill's words from 1940, "If Israel is forced to stand alone, Israel will stand alone". The U.S. Senate should do its part to help Netanyahu by immediately moving forward with a new round of economic sanctions targeting all remaining Iranian government revenue and reserves. An economically desperate Iran will be easier to defeat.