Warning: mysqli_free_result() expects parameter 1 to be mysqli_result, bool given in /var/www/html/americanthinker/admin/common/functions/func.general.php on line 126
 Lindbergh, Nazism, and Environmental Fascism - American Thinker
|

Although Charles Lindbergh (1902-1974) is known as the first pilot to cross the Atlantic solo in 1927 piloting the Spirit of St. Louis, his Nazi sympathies are often downplayed, and few know that he was an extreme environmentalist. Strangely enough, the very man who helped kick-start the space age became less interested in aviation late in life. In fact, he came to believe that technology and machines were the enemies and destroyers of the natural world.

The man who became a notorious recluse due to the political firestorm he created by becoming a national spokesman for an isolationist organization with Nazi sympathies called "America First," finally began to open up to the public late in life over environmental issues. Throughout the 1960s, Lindbergh became increasingly concerned about deforestation, the extinction of species, and marine wildlife. He also held a special soft spot for primitive peoples, i.e., the preservation of indigenous races in wild areas. He became heavily involved in protecting polar bears and blue whales along with saving of coral reefs in the equatorial Pacific. He was a director of the World Wildlife Fund, an advisor to the Nature Conservancy organization, a representative of the International Union for the Conservation of Nature, and also worked with the Oceanic Foundation. The New York Times reported in 1969, "Beyond these organizational affiliations, he pursues conservation as a private person making use of a worldwide network of friendships that he has amassed in a lifetime of aviation. This network includes political leaders, business executives and men of science."

Thanks to his environmental passion, the "Lone Eagle" became an international star for the fledgling green movement of the 1960s. Lindbergh played a very significant role in developing the green movement into an international phenomenon. Yet Lindbergh's outspoken views on National Socialism and his later worship of all things environmental are by no means inconsistent with each other. It is no coincidence that his willingness to speak publicly about white racism, eugenics, excessive Jewish influences over society, and isolationism to keep America out of the war in the late 1930s would later yield to vigorous environmental campaigning in the late 1960s. 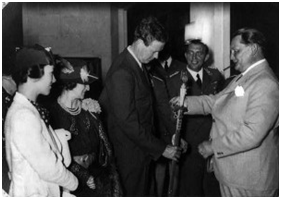 75 years ago, on October 18, 1938, Charles Lindbergh received the Service Cross of the German Eagle from Hermann Goering for his heroic crossing of the Atlantic in 1927. Field Marshall Goering was the Nazi leader of the German Air Force, the Luftwaffe. Lindbergh visited the Third Reich several times during the 1930s and became somewhat friendly with Goering, Rudolf Hess, and Albert Speer. Hess was the Nazi Party Secretary up until 1941. Speer was Hitler's architect. After Goering showed off what National Socialism had accomplished with the German Air Force since Hitler had come to power, Lindbergh extolled the invincibility of the Luftwaffe.

Like Lindbergh, what is far less known about Goering, Hess and Speer is how environmentally conscious all of them were during the green salad days of National Socialism --1933-35. In 1933, the Nazis passed an animal rights law that initially tried to outlaw animal experimentation. It was also anti-Semitic in that it barred certain features of Jewish kosher slaughter, something the Fuhrer was very proud of. In 1934, a green hunting law was passed that became a model for other countries to follow. That same year, the Nazis also promoted sustainable forestry practices. In fact, National Socialism can easily be considered the first western government to take seriously the idea of environmental sustainability as a national goal. The Nazi regime explicitly sought a fascist synthesis between racial economic development and harmony with the natural landscape. 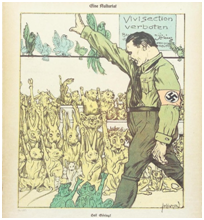 Heinrich Himmler's SS implemented a "back to the land" movement that was designed to re-ruralize segments of the German population back into the countryside to protect them from the corrosive effects of what it deemed to be the cosmopolitan city life that was allegedly run by forces alien to the Aryan race, i.e., Jewish finances and their international markets.

In 1935, the Nazis passed the Reich Nature Protection Act called the RNG which even promoted social engineering environmental schemes over private property related to building activities. The environmental slogan for this law was holistic, all-encompassing, and blatantly totalitarian, "It shall be the whole landscape!" Environmental fascism is thus no metaphor, but filed away in Germany's historical archives of the 1800s and early 1900s where it was fed and propagated by a whole host of romantic and existentialist philosophers, Social Darwinists, scientists and anthropologists -- which became the very milieu in which the word 'ecology' was born in 1866. 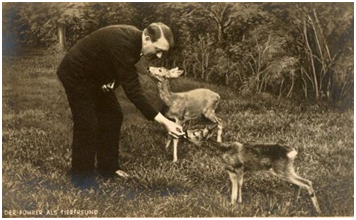 Green Nazi Alwin Seifert became one of the original gurus of what is today called stormwater management where environmental planners try to slow down runoff through the construction of stormwater ponds to infiltrate water better and alleviate erosion downstream. Nazi biologist Walther Schoenichen extolled the natural values of the aboriginal and indigenous. He also believed that natives should keep to themselves in their own culture and environment to prevent the disorderly mixing of the races.

Such a green Nazi legacy could not have gone unnoticed by Lindbergh. Even famous American conservationist Aldo Leopold (1887-1948) visited the Third Reich in 1935 to observe the new environmental direction the Nazis were taking. Though critical of some longstanding German conservation practices, he gave the Third Reich glowing remarks for their environmental efforts. In fact, Leopold's complete conversion to deep ecology coincided with his return home to America from Nazi Germany.

Starting in the 1950s, Lindbergh secretly sired three different families through three different women in Germany. Could it be that he was doing his part to recover Aryanism because of all that had happened to Nazi Germany in World War II? Indeed, Lindbergh was very upset with the Nuremberg trial proceedings, and his first romantic encounter began in 1957 just outside the famous Feldherrenhalle in Munich. This is the very location of the infamous Beer Hall Putsch confrontation of 1923 between Nazi revolutionaries and the Bavarian State Police that ended in Adolf Hitler's arrest. Lindbergh's family members were shocked when his secret affairs and children were revealed -- especially because two of lovers were physically disabled. This cut against the grain of Lindbergh's otherwise strongly held belief in eugenics.

Late in life Lindbergh said, "The primitive developed life. Civilization must be based on life. We should never forget that human life was created in and for millions of centuries, was nourished by primitive wildness. We cannot separate ourselves from this ancestral background. It is folly to attempt to do so. I believe that many of the social troubles we face today result from our being already too far removed from our ancestral environment ...I think there is nothing more important for modern man than to merge his intellectual knowledge of science with the instinctive wisdom of wildness." In short, in order for man to cleanse himself, he must root himself in Nature, and make Nature the ethos of his 'civilized' life. Such a fascist blending of anthropology, Social Darwinism, romanticism, existentialism, environmentalism and science, was in fact, the very ideological bread and butter of National Socialism.

Mark Musser is a missionary/pastor and a contributing writer for the Cornwall Alliance, which is a coalition of clergy, theologians, religious leaders, scientists, academics, and policy experts committed to bringing a balanced biblical view of stewardship to the critical issues of environment and development. Mark is also the author of two books, Nazi Oaks: The Green Sacrifice of the Judeo-Christian Worldview in the Holocaust which has been recently expanded, updated, and republished, and Wrath or Rest: Saints in the Hands of an Angry God, which is a commentary focusing on the warning passages in the book of Hebrews.