The world today is confronted by the continuing violence by and threats from Islamists seeking to overturn existing political systems and rule on the basis of Sharia law. Some Islamists have made no secret of their ultimate objectives. Osama bin Laden called for the reestablishing the rule of Islam, beginning with the reconquest of Andalusia (Spain and Portugal). Hassan al-Banna, founder of the Muslim Brotherhood issued a similar proclamation. For him "Andalusia, Sicily, the Balkans, the Italian coast, are all of them Muslim Mediterranean colonies and they must return to the Islamic fold."

Most contemporary commentators are not prepared to dispute this view as an authentic objective of Islam, nor are they willing to criticize the religion of Islam itself. Ibn Warraq, like Robert Spencer, who shares similar views, is not one of them. He is already well known for his intellectual and political courage and his strong principles and opinions, which include a critical assessment of the history and the nature of Islam. He was obliged for security reasons to adopt the pseudonym of "Ibn Warraq" when his book, Why I Am Not a Muslim, was published. He took a public stand when violent protests occurred after the publication in Denmark of cartoons satirizing Muhammad, by signing a manifesto supporting the right of free press and publication.

In earlier works, Warraq, with meticulous and challenging scholarship has been critical of Islam and of the Koranic view of government, especially because of its attitude towards women and non-Muslims. In many of his writings Warraq successfully demolished the intellectual structure created by Edward Said, which holds that all Western concepts of Islam and "the East" are predicated on colonialism, that has had a pernicious influence on the academic world. He has elucidated the misrepresentations, misunderstandings, and imaginary fiction on which Said's works are based. In all his writing, Warraq has been and is an unqualified defender of the democratic ideals and concepts of Western civilization.

In his new book, Sir Walter Scott's Crusades and Other Fantasies, larg 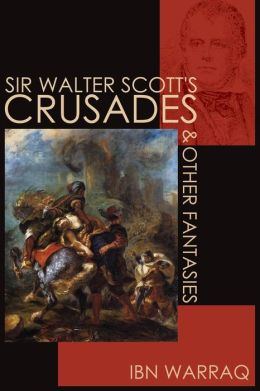 ely composed of articles already published in Internet journals, Warraq analyses some classic British novels, particularly the writings of Sir Walter Scott and George Eliot, to establish some particular and general points. He criticizes Said for his sneering comment on Scott and his cursory and jaundiced reading of (and total misunderstanding of) Scott's works. He points out Said's absurd complaint concerning the total absence of any thought by Eliot about the actual inhabitants of the East, Palestine in particular. Said himself refused to acknowledge that Jews were Easterners or Orientals at all.

More generally, Warraq uses the British literary works to shatter the myth of the superiority of Islamic civilization and the myth of Islamic tolerance, and negates the romantic view of the Muslim warrior, Saladin. He also comments on the sympathetic portraits of Jews in English literature, particularly in the work of Scott and Eliot, and on the latter's explicit affirmation of the right of Israel to be the Jewish homeland.

Warraq discusses two of Scott's books, Ivanhoe and The Talisman, in relation to his attitude towards Jews and Islamic conduct. In his careful reading of Ivanhoe, Warraq argues that Scott's portrayal of the character Rebecca was in essence based on sympathy for Jews. Scott was aware of the history of the persecution of Jews and their plight during the 12th century, the era in which the book is set. He was also implicitly critical of religious fanaticism.

Warraq himself argues, against the politically-correct view, that Muslim hatred of Jews goes back to the origins of Islam. The persecution of Jews, and also Christians, stems from the precepts and principles in Islamic texts: the Koran, the Sira (the biographies of Muhammad), the Hadith, the Tradition (records of the deeds and sayings of Muhammad), and classical Koranic commentaries.

Equally significant is Warraq's answer to the fashionable argument that the West in the past and Israel in the present are responsible for the troubles of the Muslim world. He refers to the events of the Crusades in 1095, dealt with in The Talisman and in three other of Scott's novels, to provide a corrective interpretation. Undoubtedly, the Crusaders of the 11th century were cruel, rapacious, and fanatical, and exhibited irrational religious bigotry. Not all of them were chivalrous, contrary to romantic literature. But Warraq's argument is that Islamic intolerance was and is much greater than Christian intolerance, now a thing of the past and no longer a threat to civilization.

The Crusades were violent but they were a reaction to over 300 years of jihad by Muslims against non-Muslims. The Crusaders were reacting to the desecration of Christian shrines in the Holy Land, the destruction of hundreds, perhaps thousands,of churches, including the Church of the Holy Sepulchre in Jerusalem, and general persecution of Christians in the area. Moreover, the Crusaders were not colonialists nor were they people seeking economic benefits; in fact the Crusades were a financial burden.

In this reasoning Warraq argues against the present-day politically-correct view that there was a Golden Age in Muslim Spain. Rather this was a Golden Age of Intolerance, with seven centuries of Islamic rule in Spain characterized by the persecution and periodic massacres of non-Muslims, now understood as dhimmis (tolerated second class citizens persons who are members of inferior religions). Jews were massacred in Cordoba and in other parts of Spain, 1010-1013 and in Fez (Morocco) in 1033. The first great wave of hatred of which Jews were victims in the 11th century took place in 1066 in Grenada, in Muslim Spain. This outbreak of anti-Semitism occurred 30 years before Jews were massacred by the Crusaders in the Rhineland.

George Eliot's novel Daniel Deronda has long been regarded as exhibiting empathy for Jews, an aspect of her ideal of compassion for others. Warraq points out that she was the first distinguished novelist to have discussed Zionism and the Zionist concept of Palestine as a homeland for Jews. Her positive attitude towards the reestablishment of a Jewish state was representative of the views of British public figures at the time, such as Lord Shaftesbury, who supported this idea. They appreciated that Jews had lived in Palestine for millennia before being expelled or fleeing to escape intolerable conditions. Eliot makes clear the passion of Jews for the land of Israel.

Warraq ends his book with a stinging criticism of those in the world today who are intolerant of criticism of Islamic behavior. He castigates those writers who do not uphold free expression in words and in art, and who condemn such manifestations as the famous Danish cartoons in 2005, He accuses various writers, institutions, and publishers, singling out Yale University Press as one of the more prominent, of cowardly self-censorship. One of the worst examples of Western appeasement of Muslim intolerance was evident in the indifference of many European and American public figures to the fatwa issued by Ayotallah Khomenini in 1989 against Salman Rushdie. Among those who refused to criticize Khomenini were Jimmy Carter, Roald Dahl, and John le Carré.

Warraq is also critical of those officials of the U.S. government, particularly members of the Obama Administration, whom he suggests try to eliminate from American policy statements concerning Islam certain words and phrases such as "radical Islam," "Islamic extremists," and "Islamic terrorists." In fighting words Warraq argues that unless we show greater solidarity and show that we care for our freedoms we risk losing all to Islamist "thuggery."

Warraq has been accused in the past of being polemical, and no doubt Islamists will continue their accusations. Not everyone will agree with his characterization of political Islam as a totalitarian ideology or his assertion that Islam today persecutes and demonizes non-Muslims. But all should consider his arguments seriously, though he may express himself passionately. In and of itself, his courage in undertaking the critique of the myths and falsehoods of Islamists when others demur warrants attention.