Warning: mysqli_free_result() expects parameter 1 to be mysqli_result, bool given in /var/www/html/americanthinker/admin/common/functions/func.general.php on line 126
 Celebrating a Movie the Critics Hated - American Thinker
|

Celebrating a Movie the Critics Hated

Message to high-brow movie critics and cultural elites: Stay away from the Grand Hotel on Michigan's Mackinac Island this weekend. No cynicism allowed! Not among the nearly 800 "time travelers" who arrived on Friday at the historic Grand Hotel -- the start of a three-day gathering during which they'll dress up in period garb and (in their minds) transport themselves back to 1912. The fanciful journey has been an annual ritual for 23 years now, bringing together incurable romantics from all over the country, and even abroad. It's a celebration of the 1980 movie "Somewhere in Time"-- a bittersweet love story involving time travel and shot mostly in and around the majestic 126-year-old

The film's message: love is eternal.

Critics hated "Somewhere in Time." Vincent Canby wrote in The New York Times that the film had the year's highest "giggle content," and "does for time-travel what the Hindenburg did for dirigibles." Deriding the film's "romantic idealism," Roger Ebert asked in the Chicago Sun-Times whether it wasn't "a little futile to travel 68 years backward into time for a one-night stand."

Yet "Somewhere in Time" is now a beloved cult classic -- all of which underscores the amusing perception gap that often exists between ordinary movie audiences and cultural elites (and especially movie critics). But that's not news to Jo Addie, an antiques dealer in the Chicago area, who is president of the "Somewhere in Time" fan club and editor of its quarterly magazine. "You could hardly imagine a critic putting words to paper saying they truly love a movie like "Somewhere in Time," she wrote in an e-mail message. "It would have them losing their 'credibility' or their 'edge'. "Somewhere in Time" is not for the jaded or cynical." 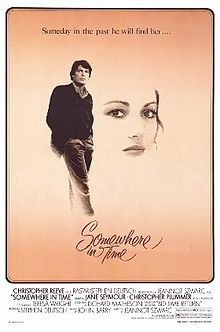 Released nationwide in early October, 1980, "Somewhere in Time" ran for three short weeks. It flopped at box offices, a fate attributed not only to bad reviews, but to bad marketing and bad luck. Among other things: an actors strike was underway. This prevented its actors from promoting it, for doing so would have violated the Screen Actors Guild's work rules. Universal Studios, for its part, never really believed in the film, having whittled down director Jeannot Szwarc's budget to a bare-bones $5.1 million.

Yet over the years cable television reruns and video rentals have elevated "Somewhere in Time" to the status of a cult classic in America and abroad. It's especially popular in Asia. A devoted fan club sprung up in 1990: "The International Network of Somewhere In Time Enthusiasts." Known by the acronym INSITE, it has been headed by Addie since 1999. Above all, INSITE says it strives to "celebrate the message of timeless love that "Somewhere in Time" represents."

And so during the first weekend of October, as Mackinac Island's tourism season winds down, aficionados of "Somewhere in Time" - mostly married couples in their 50s - dress up in period attire; go to screenings of the film; and meet with cast and crew members to discuss the fine points of the movie's production. (Christopher Reeve, Jean Seymour, and screenwriter Richard Matheson are among many who have attended.) There is a costume promenade and visits to film locations. And Mackinac Island is the perfect place to get into a time-traveling mood: Motor vehicles are banned there -- only bicycles and horse-drawn carriages are allowed, thank you.

Cost for this year's time-traveling experience: $1,000 to $1,300 per couple. To be sure, more than a few single people attend, including "twenty-somethings," Addie said. "The film is about 'finding the one', and while many films have that as their theme, this one goes further -- it gives people hope. If they have not yet found the one, it gives them hope that they still will. If they have found the one, it gives them hope it will last forever."

And sometimes, time travelers actually do find "the one"...among fellow time travelers at the Grand Hotel! "It's a fine place to become engaged. That happens every year, and some even marry during "Somewhere in Time Weekend," said Addie, who's been married 37 years. Her husband Jim, an audio engineer and consultant, helps with INSITE and was an extra in the film (for one evening), while she was an extra, at age 23, for what she calls "three glorious weeks." This year's "Somewhere in Time Weekend" is sold out.

Young playwright Richard Collier (Christopher Reeve) puts that question to his former college philosophy professor in the opening scenes of "Somewhere in Time." The answer, as Collier discovers, is yes; and shortly thereafter he wakes up in the Grand Hotel, having traveled back from 1980 to June 27, 1912. Soon, he meets the beautiful and famous stage actress Elise McKenna (Jane Seymour). They've met before, he realizes: She was the mysterious elderly woman (Susan French) who had placed a pocket watch in his hand eight years earlier. "Come back to me," she says.

Richard and Elise fall madly in love. They are suddenly separated, briefly reunited, and then, tragically, Collier suffers an absurd time-traveling mishap: He dissolves in front of a horrified Elise and is transported -- against his will -- back to 1980. The movie ends with the couple reunited in death, while bathed in a lovely white light.

Yes, the critics had some things right: "Somewhere in Time" was implausible, contrived, overly sentimental; and there of course was no nifty time machine; no dazzling special effects or gadgetry. Instead, Richard Collier embarks on his time-traveling journey through an elaborate bit of self-hypnosis. Yet for audiences, the movie had a special something. Critics laughed and sneered; yet audiences were moved to tears. How to explain this?

Critics and audiences inhabit different worlds: the former sit at free private screenings, the later pay for a box-office ticket, enjoy a "group experience" and want to be entertained: So says Hollywood screenwriter Robert Avrech, whose thriller "Body Double" (1984) was panned by many critics yet got a glowing review from Roger Ebert, who praised it as "an exhilarating exercise in pure filmmaking, a thriller in the Hitchcock tradition." "Body Double" is now a cult classic. "Critics are cultural commissars who have no connection to the market place of movies," Avrech explained in an e-mail. "Audiences just want to sit in the dark and become engrossed in a ripping good yarn."

"Somewhere in Time" combines love with time travel, a wonderful combination," he explained. "I know, I won an Emmy Award for my film "The Devil's Arithmetic" (1999) which is a time travel story and, yup, a love story. Like Marcel Proust's Madeleine, we are all aware of the limits and ravages of time. And yet we like to imagine, we want to believe, that love is bound by neither time or space."

"Somewhere in Time" was a labor of love for its cast and crew. Addie recalls only upbeat experiences as an extra. Because of the tight budget, Christopher Reeve worked for a reduced fee because he believed so strongly in Richard Matheson's screenplay. Reeve was interested in moving on from "Superman" (to his agent's dismay) to play more complex roles. Composer John Barry, a four-time Academy Award winner, also loved the script that friend Jane Seymour had sent him; and so he worked for less than he could have gotten elsewhere to produce his highly acclaimed score.

Richard Matheson's screenplay was based on his 1975 science fiction novel "Bid Time Return." Baby boomers are no strangers to his influential works, now shining ornaments of American popular culture: "The Incredible Shrinking Man (1957); "What Dreams May Come" (1998); and sixteen memorable "Twilight Zone" episodes, including "Nightmare at 20,000 Feet," "Nick of Time," and "Little Girl Lost."

To be sure, it wasn't just movie critics who hated "Somewhere in Time." So did Hollywood elites. In 1981, "Somewhere in Time" was nominated for only one Academy Award -- Best Costume Design -- but lost out to Roman Polanski's "Tess." Best Picture award went to "Ordinary People," a movie the critics adored; it dealt with a dysfunctional upper-middle class family in Lake Forrest, Illinois. Today, however, DVDs of "Ordinary People" gather dust at video stores, while videos of "Somewhere in Time" are rented over and over again. Which perhaps underscores how Hollywood over the years has become increasingly out of touch with mainstream America. It's a subject Avrech has tackled at his personal blog, Seraphic Secret. For him, movies like "Ordinary People" are part of the problem.

"Ordinary People is, well, boring and depressing, and like a wading pool: You keep expecting it to get deeper and yet the water remains waist deep," said Avrech. "It's already an embarrassing cultural relic and every critic who crowed over such a pretentious movie should publicly admit that they were duped by so-called high-art. "Somewhere In Time" is charming, entertaining and optimistic, whereas "Ordinary People" takes cheap Freudian shots at mothers. Mary Tyler Moore's performance was praised to heaven. But look at it now and you feel like cringing. Christopher Reeve and Jane Seymour deliver heartfelt performances that move -- excuse the pun -- ordinary people."

He added: "I like "Somewhere in Time." Is it one of my favorite movies? No. Not even close. But so what? I am touched by its vision of timeless love. The costumes are great and so are the locations. Jane Seymour and Christopher Reeve are highly underrated actors." 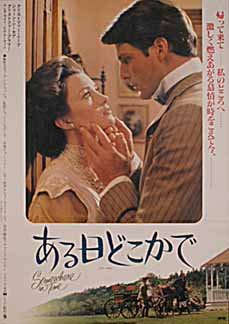 In 1984, "Somewhere in Time" was released in Asia and became a major hit. Hong Kong's Palace Theater ran the film for 18 months before packed houses. How to explain this? Addie got the answer from a "Somewhere in Time" fan, an expert on Asian culture. "He explained that in all (Asian) cultural myths, there is a man on a noble quest that is seemingly impossible and unattainable (time travel); and he is seeking a goal that is totally pure and beautiful (Elise). He has to struggle against impossible odds and obstacles to reach his goal, and give up much, even sometimes his life, the ultimate sacrifice."

To be sure, the cult status of "Somewhere in Time" is international. "We have had attendees from Japan, Australia, Brazil, Peru, and many from the U.K. and European countries," said Addie. "Last year we had a couple from Ukraine."

And just for the record, she says, "Somewhere in Time" is not a 'chick flick.' Fifty percent of its devoted fans are men. It was written by a man; the fan society was founded by a man (Bill Shepard); and it is told entirely from a man's point of view -- it's Richard's story."

In 2000, Universal Studios released a 20th Anniversary Special Edition DVD of "Somewhere in Time" that included bonus material about INSITE, including interviews with Jo Addie and Bill Shepard. And now, the timeless love story of Richard Collier and Elise McKenna may be heading to Broadway. A musical production of "Somewhere in Time" had a five-week run last May in Portland, Oregon, and New York theater producer Ken Davenport has his sights set on Broadway. Sadly, Richard Matheson didn't make it to the Portland opening, having died last June 23. "He was enthusiastically behind this new chapter for his story of Richard and Elise," said Addie.

Yes, critics may sneer, but as Addie explained: "Somewhere in Time" is for people who have old-fashioned values, believe in true love and commitment, are romantic at heart, and feel displaced in our violent and chaotic world, and wish for a better one."

She and fellow time travelers have a message for Hollywood: make more movies like "Somewhere in Time."