Warning: mysqli_free_result() expects parameter 1 to be mysqli_result, bool given in /var/www/html/americanthinker/admin/common/functions/func.general.php on line 126
 British Progressives Join the Sunni-Shia War in Syria - American Thinker
|

The UK's Leftist-Islamist coalition (or alliance) has, at least in part, fallen apart recently.

The well-known and notorious George Galloway is facing some stick from Sunni Muslims in the Bradford branch of the UK's Respect party. (Bradford is a city in the north of England with a very large Sunni-Muslim population of a Pakistani and Bangladeshi heritage.)

Galloway is getting it in the teeth primarily for his support of the Alawite (Shia) leader Bashar Assad during the on-running Sunni-Shia civil war in Syria (as well as for his parallel support for Shia Iran).

Five Sunni councilors left Galloway's Bradford Respect party last week. However, the remaining members of Respect, including Galloway, claimed they were effectively sacked. Nonetheless, the sacking email is reported to have been sent after the Sunni Muslims had already resigned.

(These internal disputes within Respect began the moment the party was formed by various renegades of the Trotskyist/'progressive' Socialist Workers Party. That's what ideological purity, mixed with cynicism and opportunism, will necessarily lead to.)

The official reason for the Bradford Respect rupture -- although this reason will at least be a part of the story -- is that certain 'unnamed figures' (i.e., George Galloway), have, in the words of Bradford's Islamist councilors, 'no interest in transparency, accountability and equity'.

George Galloway is also an important leader of the UK's Stop the War Coalition (StWC). One other leader -- and a founder -- of the StWC, its 'national officer', is John Rees; who's also of Counterfire and the very recent Trotskyist front group, the People's Assembly. Rees also effectively works for the Iranian state and does its propaganda business via Press TV and the Islam Channel. (Here's a CST link on John Rees's work for the Islam Channel and here he is on Press TV.)

Let that sink in for a moment. John Rees will be receiving a substantial paycheck each month from the Iranian state. Rees, as a leader of the People's Assembly, also once said that he'd support Iran in a war with Britain. 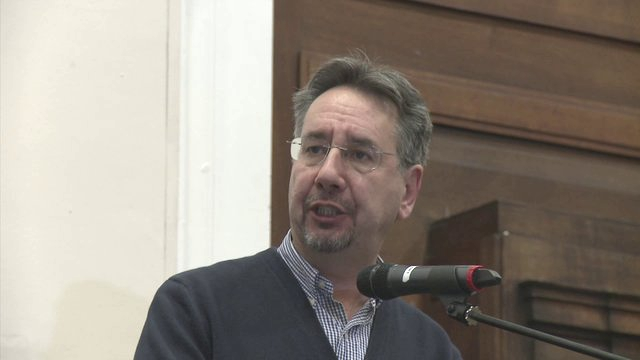 Now I wonder what John Rees thinks of the hanging of sixteen revolutionary Sunni fighters by the Iranian state last week. That had nothing -- directly -- to do with the Syrian conflict. It's all do to with Iran's other borders with Pakistan and Afghanistan. (There is no Iranian border with Syria.) Come to think of it, what does John Rees think of the Iranian state killing gays, persecuting Christian and Sunni minorities, and oppressing women? Actually, he doesn't think that any of this is wrong. Why? Because Iranians have brown skin and they're also -- or the state is -- anti-West and officially anti-capitalist. That's all it takes for Trotskyist progressives like John Rees to reverse their previous deeply-held political standards. Change the oppressor's skin color from white to brown (or to black) and the oppressor simply ceases to be an oppressor. That's how simply Trotskyist, or John Rees's, logic is.

Now set John Rees views on Iran within the context of the Trotskyists -- now called 'progressives' -- in Britain who believe that black and brown people can simply never be racist; or even be held responsible for criminal activity or political violence. This, apparently, is true by (Marxist) definition. Why? Because brown and black never have 'political power'. This means that they are always 'oppressed' and always victims. Thus, like a mathematical equation, they simply cannot do either political or criminal wrong -- just like children really. This is the stipulation/diktat behind the hypocrisy and (positive) racism of the Left. It is a thoroughly normative pronouncement, or even a moral law, on racism which comes after some pretty mindless theoretical (Marxist) mumbo-jumbo.

Similarly with Iran -- it too can never do wrong. It can do no wrong because it is a state of mainly brown people. That is, it's not white, not Western and not capitalist. (However, it is, at least in part, capitalist; but brown capitalism is better than white or Israeli capitalism.)

The Trotskyists -- such as the ex-SWP Lindsey German -- who set up and run (not every supporter/member is a Trotskyist) the Stop the War Coalition weren't against military intervention in Syria because they are against war. They are certainly not pacifists. (They strongly believe in 'revolutionary violence'.) They were against military intervention for two main reasons:

2) 'Western capitalist states' would have carried out the military intervention in Syria. Therefore it would automatically have been wrong because, by Marxist logic, it would have been exclusively driven by the 'inevitable laws of capitalist accumulation and imperialism'

In other words, the Stop the War Coalition isn't against war at all. It's only against 'Western' or 'capitalist' wars. Mass murder and oppression carried out by brown or black people, or when carried out by Leftist regimes, does not even register in the Trotskyist or Progressive mind.